Just over two weeks ago, the Minnesota Wild seemed like a team that was on track to do some serious damage in the postseason.  They had won six games in a row, Devan Dubnyk was named the NHL’s Second Star of the Month for March, and the team had a huge feather in their cap that was a season series sweep of the rival Chicago Blackhawks.  The Wild had so much momentum, many were starting to wonder if they could overtake the Nashville Predators for the No. 1 wild-card spot in the Western Conference.

Oh how things have changed in just a couple of weeks.  The Wild did clinch the final playoff spot in the Western Conference last Tuesday night as the Avalanche lost to the Predators, and are now headed for a first round date with the Dallas Stars.  All this despite their poor showing in a 3-0 loss at home to the San Jose Sharks, and a 2-1 late defeat at the hands of the Calgary Flames that became their fifth loss in a row to end the regular season.

So upset were the remaining Wild fans at the Xcel Center for the Sharks game that they booed the team as the left the ice.  Then more of the same performance and criticism in the regular season finale loss to the Flames on Saturday.  John Torchetti and the players seemed to be almost upset with the media and fans for their harsh criticism of the team.

While Torchetti and the team seem to be perplexed at the fans’ reaction at their “backing into the playoffs,” a quick dose of common sense would explain why the fans are not high on this team at the moment.  The team has hurdles to get over with its fan base, media base, and within their own locker room that take root in far more than just a five-game losing streak.  The Wild will need to do some work to correct them if they want to make a successful playoff run.

Sins of the Past Shadow the Future

The wounds of the January/February meltdown that led to the sacking of Mike Yeo and the events of previous midseasons are still fresh and not really healed all that much.  It was very hard to watch the obviously talented Wild lose in the fashion that they did during these dramatic downs.  Many of the Wild faithful have seem to begin to question if the team was worth their time and dedication. 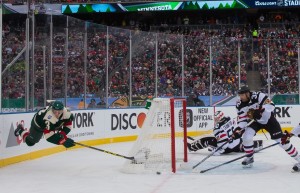 The expectation going into the season was that the Wild would capitalize on their past season’s performance and offseason moves to make a consistent run that would take them past the second round of the Stanley Cup playoffs.  So when expectations look like they are not going to be met amid another midseason meltdown, the fans and media this year lamented “Here we go again.”

The traumatization of the losing streaks of the last two seasons especially leave the Wild fans no choice but to be skeptical and possibly cynical.  This Wild team needs to know that when they lose in multiple games like they currently have, they have to work extra hard to show that they can indeed win games in a consistent manner.  Right now that’s not really being done.

Where is Rock Bottom?

Had the Wild been able to maintain a consistent pace throughout this season, the current situation wouldn’t seem so bad.  Alas, the Wild find themselves a streaky team that has left everyone wondering will they keep the streak in the losing column or will it turn to the winning column?  Furthermore, if it does turn to a winning streak, will that streak last long enough to bring the Stanley Cup to Minnesota?

When a team backs into the playoffs like the Wild have, it makes people wonder if their losing ways are finished when the playoffs start or if they will just end up continuing the losing streak. The basic question in this case is have the Wild hit rock bottom, or will they continue to lose into the playoffs? They are a team that is making it into the playoffs with 87 points, which is the lowest in the history in the shootout era. What says they’ll turn it around?

The team should be playing better right now. In order to win in the playoffs, the winning formula should be something that is being repeated night in and night out down the final stretch of the regular season. The fact that Torch is still fumbling with his lines makes everyone wonder if the team has truly found the formula in which playoff success will follow. Additionally, the sense of urgency and alarm on the players’ part seems not to be there.  The Wild have to know that from here on out its time to win; that’s what you do in the playoffs.

Perhaps the most disturbing trend lately seems to be a lack of swagger on the part of the Wild players.  In interviews after these five losses, it seems that the team speaks almost dismissively of the errors that caused them to lose. The team’s leaders need to step up and take responsibility for the miscues, not just the successes.

Torchetti always talks about losing battles on both sides of the puck, but rarely is that sentiment echoed by the players. It almost seems like Torch’s personality has taken over and the players have decided to passively allow him to be the sole director of the team. When looking at Torch’s goals for the team when he took over, he explained in the Star Tribune article before the game in Vancouver the idea of the “core group” leading the team and being the driving force of the team is crucial to his initial vision for success.

Players like Suter, Parise and Koivu need to be the ones to right this ship and get the team looking toward the playoffs and a possible championship. If the players are there to win, then they need to be the ones holding each other accountable. Torchetti’s culture is a great accountability model, but he can’t do it all himself — the players must meet him half way at some point if the Wild are to be successful.  After the Calgary game, Torch explained in the press conference about just how frustrated he was with the situation.

All is certainly not lost for the Wild right now. The playoffs are a whole other season and anyone can win it all as long as they get in. The Wild are in, but they can ill afford to continue with inconsistent play. It only takes four losses in a playoff series and the team is done. Throwing your hands up and saying “All that is positive right now” to cover up a loss will not help the team bounce back and win the games needed to make a run to the Cup or beat the Stars in the first round. The Wild will need to figure out how to make that run before their Rd. 1 opener in Dallas.