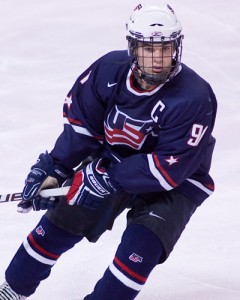 Rocco Grimaldi is the most skilled forward in the draft. He possesses an incredibly dynamic offensive game, and has all the right tools. The question remains, what is holding back scouts from declaring Grimaldi a consensus top five pick?

To put it simply, his size could hold him back from being elite. It’s an unfortunate reality that players five and a half feet tall aren’t too common in the NHL, and a reality that Grimaldi will have to deal with. Size is not something you can learn by putting extra hours in at the rink. It is either something that you have, or you don’t.

Grimaldi spent the last two seasons playing for the US National Development team honing those elite offensive skills, and will take his talents to the University of North Dakota in the fall.

Among all the talk of his offensive ability, his heart and drive get lost when you read scouting reports. But that doesn’t mean it’s not there. If Rocco Grimaldi were asked what the most valuable thing he could bring to the team that drafts him would be, he would tell you it’s his drive to be the best, and be a great leader.

Despite being undersized his whole life, Rocco Grimaldi hasn’t given up. And he is not about to now.

Playing in the USHL, Rocco Grimaldi did not participate in the top prospects game.

“He’s not very big, but in terms of his ability to make things happen, especially offensively, he’s unbelievably dynamic,” Rolston said. “He skates well and has a great first step. In terms of his skills, he’s outstanding. He’s someone on our team we look to create offense every game and, without question, one of our most dynamic forwards.”

-Ron Rolston, Coach of U-18 US National Development Squad

“Grimaldi is a blur from goal line to goal line, but it’s his quickness in close quarters that separates him from the pack. For those measuring under ideal NHL size, speed, acceleration and agility are not just assets, they’re a means of survival when hulking D-men close in for the kill. And Grimaldi hasn’t just mastered the art of elusion, he’s also using his top tool to exploit bigger, but slower skaters.”

Rocco Grimaldi is not shy to international success. He won Gold with the USA at U17 WHC. Grimaldi has also helped the USA capture gold, back to back years in the 2010 IIHF World U18 Championships. Grimaldi finished the tournament this year with two goals and six assists in 6 games played.

Top line sniper at his best, shootout specialist if his skill doesn’t translate.