The NHL is finally starting to realize they have a real problem in their game.  Unfortunately for them the problem is what attracts the fans; goal scoring.  Today the NHL is filled with perhaps the best high-end talent pool the league has ever seen.  However, the league seems intent on instituting new rules to eliminate scoring.  The instant replay system is a perfect example of this.  The NHL decided to put in the new coach’s challenge system which would take goals off the board on missed offside plays and goalie interference.  This rule was put into place to get the right call, but there was never an out-cry from fans to put this into the game.  Instead it has aggravated fans and again reduce the goal total in games.

Now to fix the scoring the league has floated out ideas like increasing the net size and reducing the size of goalie equipment.  The reduction in equipment size may help slightly, but won’t get the results that are desired.  While the idea of increasing the net size is an absolutely terrible idea.  Adjusting the size of the net would be a radical change to the game when much easier solutions are available.

The way to increase scoring in the NHL again is actually fairly simple and rules will not need to be changed, instead current rules will simply need to be enforced properly.  The league needs to go back to calling penalties again.  Giving teams more power-plays per game will increase goals and allow the talent on the ice to show up again.  By again removing obstruction from the game like the NHL did out of the lockout in 2005, the speed and excitement of games will begin to pick up.  Teams will be able to enter the offensive zone with speed again and score on the rush instead of scoring
mostly on lucky bounces. 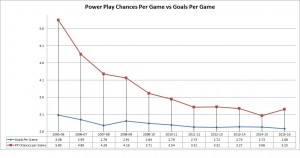 When the NHL returned from the lockout in the 2005-06 season the initiative was to call more penalties and make the game exciting again.  The plan worked and scoring was at its highest since the 1995-96 season. Penalties per game have decreased by 48 percent from 2005 at 5.85 power-play opportunities to an NHL low 3.06 power-play opportunities per game last season.  Over that same period scoring has declined by 11 percent from 3.08 goals per game in 2005 to 2.73 goals per game last season.

Buffalo Sabres coach Dan Bylsma was asked on his weekly radio spot on WGR Sports Radio 550 in Buffalo if he thought increasing the net size was good idea, he was not in favor of it.  He instead thought the way to fix the scoring problem was to go back to calling penalties.

Dan Bylsma has it right on increasing scoring in the NHL

"I'd like to see them call the rule book"

It appears coaches and GM’s are on board with this idea, so why has the league gone away from enforcing penalties? It never made sense why the NHL went away from the style of play that brought fans back.  Now the league has regressed back to the dead puck era in regard to goals.  The league needs to step back and look at what was successful for them.  They need to understand what sells tickets and grows the sport.  Instead of implementing more rule changes and drastically changing parts of the game, the NHL can simply just enforce the rules they already have in place.  Allow the skilled players to come to the fore front and take obstruction back out.