The Tampa Bay Lightning’s new uniforms are generating buzz in the hockey world, but the re-worked sweater is only the most obvious element of the Lightning’s organizational transformation.

Here are five key changes you need to know about. 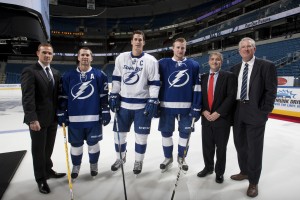 The transformation started with Jeff Vinik. Prior to the now 52-year-old founder and chairman of Vinik Asset Management’s purchase of the team in March of 2010, the Lightning were mired in ownership purgatory, beleaguered by infighting and a lack of financial commitment.

Vinik, by stark contrast, is a vivacious and ambitious owner. And he’s willing to spend.

When the deal to purchase the struggling team was finalized, Vinik announced that “I’ve been an avid hockey fan my whole life and I pledge to our fans that I will work my hardest to build the Lightning into a world class organization both on and off the ice. I hope to bring a high level of excitement and intensity back to Lightning hockey, with a goal of having the team consistently compete for the Stanley Cup.”

Considering that the team finished dead-last in the Southeast Division in the two seasons prior to Vinik’s purchase, and promptly proceeded to miss the playoffs for the third straight year within a month of the purchase, Vinik had his work cut out for him.

One of the first significant decisions Vinik made was the hiring of Steve Yzerman as the Lightning’s Vice President and General Manager. While never having worked as a GM, Yzerman brought with him tremendous credentials. Besides his Hall of Fame playing career that includes three Stanley Cup rings with the Detroit Red Wings, Yzerman also served as the Vice President of the Wings, earning an fourth championship ring, and learning from front-office greats Ken Holland and Jimmy Devellano. Appointed as the Executive Director of Canada’s National Men’s Ice Hockey team, he faced tremendous pressure but emerged as the acknowledged architect of Team Canada’s gold medal at the Vancouver Olympics.

In a letter Yzerman addressed to the Lightning’s fans, he stated that the team was intent on “hiring an innovative, driven head coach”. They found such a coach in Guy Boucher – a man with exactly one year’s worth of experience coaching professional hockey, and not a day of it spent in the NHL.

At the time of the hire Yzerman explained that Boucher’s “been a part of winning programs for a long time, so I had no reservations. He’s 38 years old, he’s not 21. He’s been in this game a long time.”

And Boucher has earned a reputation as an innovator over that time, and has demonstrated success in multiple levels of hockey as a coach. He’s led Canadian major-junior hockey teams to the national championship Memorial Cup tournament twice. In 2009 he was plucked by the Montreal Canadiens out of the junior circuit and named him head coach of their farm team, the Hamilton Bulldogs of the American Hockey League. He proceeded to lead the Bulldogs to the Western Conference Final.

A final major piece was added to the Tampa Bay front office in July of 2010, when the Lightning hired Tod Leiweke as Chief Executive Officer of the Tampa Bay Sports and Entertainment, which owns the Lightning and their home, the St. Pete Times Forum.

Like Yzerman and Boucher, Leiweke arrived with an impressive track record. Prior to joining the Lightning, he served as the Executive Vice President of the Vancouver Canucks, the President of the Minnesota Wild, and most recently as CEO of the Seattle Seahawks.

“I’m sorry to see him go, but I know hockey is his first love.” Paul Allen, Owner of the Seattle Seahawks on Tod Leiweke

The Seahawks owner, Paul Allen, stated that Leiweke “helped lead the Seahawks to the 2005 NFC Championship and our first Super Bowl. He also understands our priority on the fans…leading the team to a five-season string of sell-out crowds. I’m sorry to see him go, but I know hockey is his first love.”

Speaking for himself, Leiweke seems ready to pick up where he left off in Seattle. “I envision a day when the Lightning will regularly play in front of sold-out crowds at the St. Pete Times Forum and be recognized as one of the leading corporate citizens in Tampa Bay.”

To the average hockey fan, the new uniforms have been the most visible aspect of Tampa Bay’s transformation. Shifting from the blue, black and silver scheme that the team has used since it’s entry into the league in 1992, to a simpler blue and white scheme.

The Lightning worked with SME, described as a “strategic brand development firm” on the Lightning’s website, seeking a look that was “bold, classic, iconic and hockey-centric” for the new logo.

“We also found when studying the current mark that the black eats the blue and the silver turns gray in most applications and on television.” While the new uniform is intended to be classic, the team’s thought process clearly has considered some very modern variables.

“Tampa has gone bold with their new look, and it’s a winner.” Ryan Kennedy of The Hockey News

The Hockey News pronounced the new look “a winner” and notes that the Lightning join the Toronto Maple Leafs and the Detroit Red Wings, both Original Six era clubs, as the only two-colour teams in the NHL. 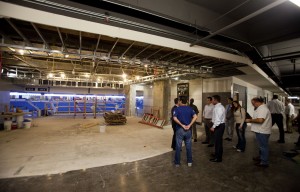 Visiting teams better get used to seeing the seats awash in blue and white, because every season-ticket holder will receive one of the new jerseys for every seat held.

The St. Pete Times Forum is in the last stages of a $35 million face-lift. Announced this past spring, Tampa Bay’s biggest reno-project will be completed for the Lightning’s home opener on October 17th.

The sweeping updates include a new grand entry, the addition of an 11 000 square-foot outdoor deck overlooking downtown Tampa, new seats, a new heating, ventilation and air conditioning system that will improve ice conditions, the installation of a massive pipe-organ, and the inclusion of what Vinik describes as “live lightning strikes”. Yes, they’ve installed a lightning machine in the forum. Wow.

These changes over the past 18 months have radically transformed the franchise for the 2011-12 season. But at the core of the new Lightning is an ambitious new philosophy that seeks to define the Lightning’s priorities.

Foremost in this new philosophy, described as their brand architecture, is the organization’s vision statement which declares that the franchise shall be “a world class organization winning at the highest level and unifying Tampa Bay through the power of Lightning hockey and legendary events.”

The architecture lists four hallmarks of the organization:

While some may view such a list with cynicism, Vinik has demonstrated that he is prepared to spend money and energy to make this vision a reality.

Many have high expectations for the Lightning in 2011-12. Some of those expectations may be too high. The full effect of the recent organizational changes may require years to mature.

But regardless of the Lightning’s performance this year, the transformation cannot be dismissed as skin deep; the very bones of the organization have been altered.