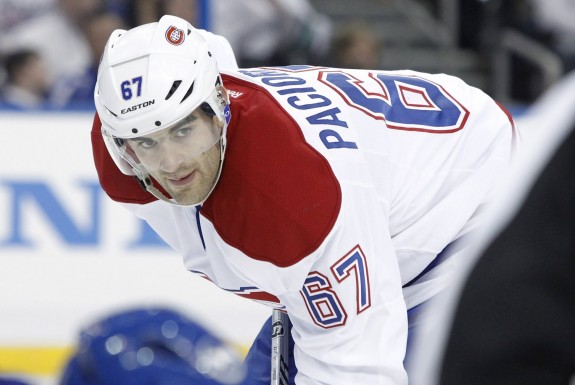 Every franchise has made a number of regrettable moves throughout their history. Sometimes it’s trading the wrong players at the wrong time, and sometimes it’s signing skaters to mammoth contracts early in their careers. These mistakes are part of being in such a competitive league; general managers are under pressure to make the right moves but often create incorrect predictions about certain situations.

The most painful errors almost always revolve around the NHL Entry Draft. 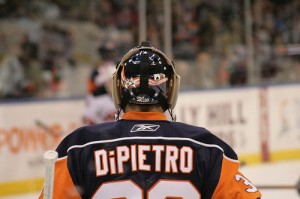 As spectators living in the modern day, it is easy to look back at picks that were either moved or didn’t pan out and make a critical judgement. Would you select Rick DiPietro first overall knowing what you know now? Probably not, though Mike Milbury saw a potential franchise goaltender in the 19-year-old American. As the cliché goes: hindsight is 20/20.

The San Jose Sharks are no stranger to draft-pick disasters, especially when it comes to trading selections that eventually turn into spectacular skaters. This organization is known for moving picks prior to draft day and being buyers at the trade deadline to make a push for the Stanley Cup.

These transactions have caused San Jose to miss out on a number of star players.

Today, we will look at the top-10 Sharks that never were. All of the athletes listed were selected by other teams using a draft pick that was San Jose’s at some point. If you are a fan of Team Teal, this may make you cringe … or cry.

During the 2007-2008 campaign, the Sharks were looking to make a serious run for the Cup in the approaching postseason. The team had potential, but they lacked offensive talent on the blue line.

In an effort to obtain a scoring defenseman, San Jose traded Steve Bernier and their 2008 first-round selection to the Buffalo Sabres in exchange for Brian Campbell and a 2008 seventh rounder prior to the trade deadline. 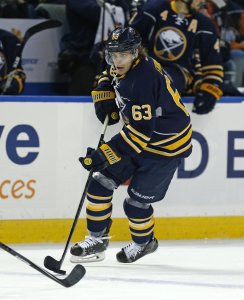 This transaction backfired for the Sharks after a few months. After losing to the Dallas Stars in round two of the playoffs, Campbell elected to leave the team in search of a bigger contract. They then used Buffalo’s seventh-round pick to select Drew Daniels, who has yet to play at the NHL level.

The Sabres, on the other hand, used the Sharks’ first-round pick to select forward Tyler Ennis 26th overall.

Ennis has been a force on a bad Buffalo team. In 345 games, he has registered 212 points for his club. He has also won two gold medals for Team Canada since he was drafted into the league (2009 World Juniors and 2015 IIHF Worlds) and is poised to make an even bigger impact on the league in the next few years.

Believe it or not, San Jose obtained the rights to Mark Messier from the New York Rangers in the summer of 2003 for future considerations. Unfortunately, Messier elected to sign back with the Rangers that summer and retired after the 2004-2005 lockout. 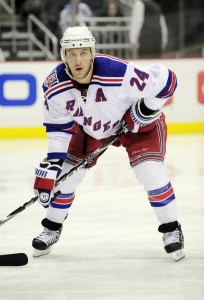 The 2004 fourth rounder that the Rangers acquired from the deal as part of the future considerations, however, turned into forward Ryan Callahan.

Callahan has developed into a potent point producer and has earned 319 points in 547 games. He is currently participating in the Stanley Cup Finals and has played for Team USA twice at the Olympics.

This transaction was a peculiar one since Messier seemed destined to retire at the time of the trade. Nevertheless, the deal was made and the Sharks missed out on a highly skilled player because of it.

The Sharks traded both Alexander Korolyuk and Jim Fahey to the New Jersey Devils in exchange for a conditional first-round pick before the start of the 2006-2007 campaign. This turned out to be a smart move because both Korolyuk and Fahey spiraled into irrelevance afterwards. But, San Jose wasn’t done yet. 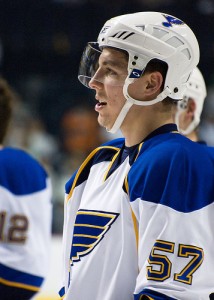 The Sharks then dealt the Devils’ pick, along with Ville Nieminen and Jay Barriball, to the St. Louis Blues for veteran Bill Guerin before that season’s trade deadline.

The condition that was set for the selection went through, and the Blues were able to choose David Perron 26th overall that year with New Jersey’s pick.

Perron has gone on to have a stellar career with multiple clubs. Since his start in the NHL, he has earned a 0.593 points per game average and amassed a 51.9% corsi despite starting 51.7% of his shifts in the defensive zone.

The Canadian native has earned a quality 296 points in his career while also showing his ability to control the play while he is on the ice. He would have fit well in a San Jose uniform.

In the middle of the 2005 offseason, the Sharks and the Atlanta Thrashers exchanged a number of picks with each other. San Jose received Atlanta’s 2006 first-round pick (eighth overall) by sending their first, second, and seventh rounders to the Thrashers. The Sharks would use their newly acquired first-round pick to select Devin Setoguchi. 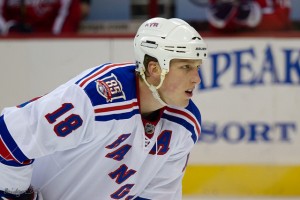 The Thrashers then immediately traded San Jose’s first rounder to the New York Rangers for a few more picks later in the draft. As a result, the Rangers obtained defenseman Eric Staal with the 12th overall selection.

Staal has earned a reputation for being a high-caliber defenseman. He has won four gold medals representing Team Canada in multiple tournaments and is known for being a physical player while also being a terrific skater.

Staal turned out to be a quality player that may have aided San Jose’s historically bad defensive corp for a number of years.

One year before the famous Joe Thornton trade, the Sharks and the Boston Bruins made another blockbuster deal. However, this trade took some time to become a critical part in both franchises’ histories.

On the day of the 2004 draft, the teams exchanged a number of picks with one another. Boston sent over their 2004 third- and ninth-round selections and Tampa Bay’s fourth rounder to get San Jose’s second-round pick for that year.

While the Sharks were able to draft both Thomas Greiss and Torrey Mitchell using some of these picks, the Bruins emerged victorious by selecting David Krejci with San Jose’s choice.

Krejci is dominant in hockey in every sense imaginable. Not only did he help his team to a Stanley Cup in 2011, but he has also earned 0.742 points per game, a plus-104 rating, and an astonishing 53.3% corsi-for percentage.

Greiss and Mitchell are good, but they aren’t Krejci good. This is definitely a move that both the fans and the franchise would like to have back.

This transaction is a bit confusing but also quite interesting. During the 1997-1998 season, the Sharks traded Viktor Kozlov and a 1998 conditional fifth rounder to the Florida Panthers for David Lowry and Florida’s first-round pick.

This pick turned out to be the first overall selection, but San Jose traded it to Tampa Bay, along with Andrei Nazarov, for the Lightning’s first-round choice, Bryan Marchment, and David Shaw.

This, coincidentally, became the second overall pick in the upcoming draft. But, the Sharks decided to deal Tampa Bay’s pick to the Nashville Predators for their first- and second-round picks on draft day. 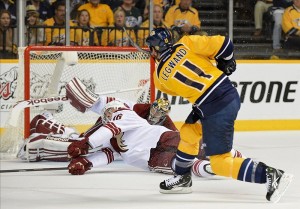 Are you confused yet? That’s okay.

Legwand is known for his two-way play and has received votes for the Selke Trophy on multiple occasions throughout his career. He has played over 1000 games in the NHL while earning 604 points in that span. In addition to this, he still holds a number of franchise records for the Predators and is considered one of the best players to ever skate in a Nashville uniform.

In another instance of being buyers at the trade deadline, the Sharks traded their 2007 first-round pick and Josh Georges to the Montreal Canadiens for defenseman Craig Rivet and a 2008 fifth rounder. 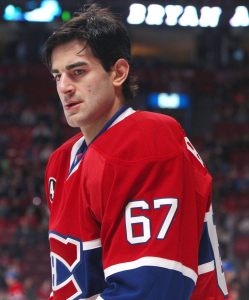 San Jose would fail to win the Cup that year and Rivet would only play one more season in San Jose. Montreal, however, used Team Teal’s selection to pick Max Pacioretty 22nd overall.

It is hard to overstate how good Pacioretty has been for the Canadiens. He has 288 points in 399 games, which puts him at a 0.721 points per game average. He also has a plus-47 rating and is a dominant possession player; his club averages 5.7% more shot attempts when he is on the ice.

Pacioretty has all of the qualities of an elite skater. It is too bad San Jose gave up the pick used to select him for a short-term player and a late draft choice.

On 16 November 1995, San Jose acquired the Philadelphia Flyers’ rights to Martin Spanhel along with their 1996 first- and fourth-round picks in exchange for Pat Falloon. The Sharks then traded all of their new assets, plus Vaclav Varada, to Buffalo for Doug Bodger. 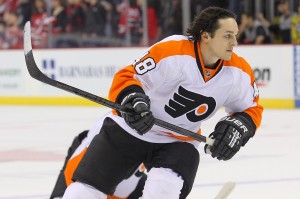 The Sabres went on to trade Philadelphia’s first rounder to the Winnipeg Jets, who became the Phoenix Coyotes at the end of the season. Using this selection, the newly formed Coyotes selected Daniel Briere 24th overall.

Briere has built himself a respectable career in the NHL. He has recorded 696 points in 973 games, which is good enough for a 0.715 points per game average. He also led all players in points during the 2010 playoffs.

Outside of games in the National Hockey League, Briere has played in two All Star events and won four gold medals with Team Canada in a number of tournaments.

Remember those confusing transactions that took place before the 1998 draft that saw the Sharks pass up the chance to select David Legwand second overall? Well if you recall, they also held the first overall pick in that draft for some time as well. The player that was drafted before anyone else that year: Vincent Lecavalier. 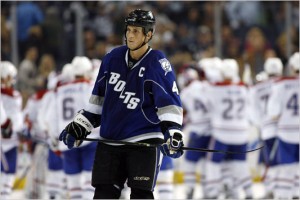 Captain V leads the Bolts in scoring in the postseason

Lecavalier was a natural at the game of hockey. Spending most of his career with the Tampa Bay Lightning, he earned 931 points in 1163 games.

As if his point production wasn’t enough, the Canadian played in four All Star Games, won the Rocket Richard Trophy in 2007, and helped the Lightning to a Stanley Cup victory in 2004.

Lecavalier’s career in Tampa Bay was illustrious and leaves many Sharks fans wondering what would have happened if he suited up in teal.

If you’re a fan of the Sharks, you’re probably crying right now.

After a terrible season that saw San Jose finish with 24 points, the Sharks possessed the second overall selection in the 1993 draft. However, instead of using it to pick a prospect, they traded it to the Hartford Whalers for Sergei Makarov, and the Whalers’ first, second, and third round selections. Meanwhile, Hartford used the Sharks first rounder to pick up future-legend Chris Pronger.

Pronger will go down as one of the greatest defensemen in NHL history. Not only did he put up 698 points in 1167 games, he registered a plus-183 rating while shutting down the best shooters in the league.

He is a member of the Triple Gold Club and played a physical–albeit controversial–style of hockey that saw him suspended multiple times during his career.

Although he is one of the most hated players among Sharks fans, you’ll be hard pressed to find someone who wouldn’t want Pronger on their team. This man is a superstar and will be remembered throughout hockey history.

While it is depressing that the Sharks traded away future stars before they were even drafted, fans need to understand that it happens. No one is capable of seeing the future. 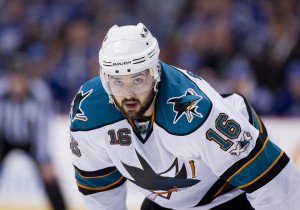 Even so, San Jose obtained some pretty good names because of these moves; Setoguchi, Mitchell, Marchment, and Makarov all had respectable careers with the organization.

Making mistakes is a part of hockey. Your favorite team may deal away some fantastic players, but they have probably brought in some great ones as well. Sometimes, you just have to deal with it.