It is 1:23 AM and I just finished watching the Los Angeles Kings defeat the Toronto Maple Leafs 2-0 in what I thought was a very entertaining game.  Here are some thoughts I had while watching it:

– I wish I had of bought beer.

– I’m Glad I taped this thing so I don’t have to watch these guys talk.

– Expletive deleted that was a bad beginning(although, truth be told, I was more concerned about Bernier’s GAA/S% vis-à-vis my hockey pool). 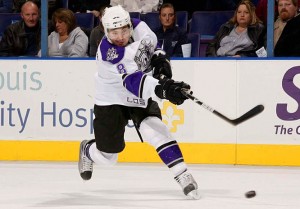 – I thought the game was exciting. Though there weren’t a lot of scoring chances either way, it seemed to me a fast paced game with a lot of hits. I like high scoring games, but for a regular season game in January, this was a good game to watch.

– I have been critical of Roman Polak and everyone tells me he’s so great, so I tried to pay special attention to him tonight and I thought he was good. I especially enjoyed his hit on Gaborik behind the Leafs net and there was a play in the third when he could have just done the typical no-look desperate rifle-it-out-of-the-zone, but he skated it up and got it out.

– I thought both Morgan Rielly and Jake Gardiner had great games. Perhaps inspired by  the play of Doughty, they both seemed to me to be flying out there and confident rushing the puck.

– I felt nervous for Gardiner in the third when he made a bad give-away and was greatly relieved when the Leafs cleared the puck. Gardiner was having such a good game and I knew if that puck went in all anyone would remember was that.

– I think on the power-play that Gardiner and Rielly are either already better than Franson and Phaneuf or well on their way. They seem more creative, even if they can’t match the rockets Franson and Phaneuf are capable of firing (and maybe they can, who knows?).

– I think now that Kadri is on the second power-play unit to balance the scoring talent as opposed to the coach not realizing that Kadri is the obvious choice for the top unit. A power-play line of Clarkson-Bozak-Panik does not inspire much fear.

-Perhaps Clarkson is on the power-play since they’re stuck with him and are desperate to get him going. It is clearly not a reward for solid play.

-I must admit I feel bad ripping on the guy. But then I remember that he makes five million dollars and I owe tens of thousands of dollars in student loans and recently ate a grape that fell on the floor.

-I thought that five billion dollars (too late to fact check the real number, let’s go with that) could buy you at least one analytics guy for your TV station. Advanced stats are not a fad or a some kind of stupid lark, they really do give you a more realistic and nuanced understanding of the game and that is undeniable. That is not to say that there is only one way to view or understand the game – because no serious person thinks that. You clearly, do not need advanced stats to understand 99% of the game, so it’s not like any of the regular analysts are in danger of becoming irrelevant, but they do reveal interesting contrasts with traditional conventions.

The either/or mentality of the “stats vs eye-test” debate is ridiculous. Numbers give you a better understanding of everything. Period. But science is based on observation. Both ways are relevant and interesting, but I think if you’re going to broadcast a hockey game in 2015, once virtually every NHL team is on board with this, you have to at least acknowledge the concepts as more than a joke that “most Leafs fans aren’t interested in.”

-Basically I am just saying that Sportsnet having Kypreos and Cox argue about nothing and use the word Corsi in italics with sarcastic implications could easily be improved upon by having Kypreos (a great hockey analyst who knows the game as good as anyone) debate an expert in analytics about what they saw each period. I’d not lean on my FF button if that was an option.

-They should also have a segment each game of a guy explaining various terms – CF%, Corsi, PDO etc.

– When this happens – and it will – all I want from Sportsnet is Gene Principes autograph.

-Oh, and also I think Kopitar might be the best player in the world.