Despite getting outshot 76-38 in the first two games, the Detroit Red Wings are coming home with a 1-1 split against the best home team in the NHL. However, it’s quite clear that the Red Wings will not win this series, let alone another game if they continue to play the way they have thus far. Mike Babcock has already tried to shake things up by bringing defenseman Brendan Smith back into the lineup as well and having 20-goal scorer Justin Abdelkader re-enter the fold. Aside from lineup changes, what tactical changes can Babcock implement to slow down the league’s most potent offense as well as re-energize his own team?

Babcock confirms Smith is in. Marchenko is out.

One of the areas where the Red Wings have struggled greatly is in exiting their zone. This is not a new problem for the Red Wings as it’s been an issue since Nicklas Lidstrom and Brian Rafalski retired. The Red Wings rely heavily on their speed coming through the neutral zone but that speed is completely neutralized (see what I did there?) when they can’t make clean breakout passes. 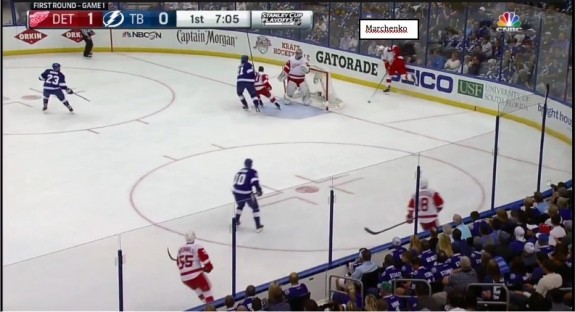 In this image, you can see that Red Wings’ defenseman Alexey Marchenko has time to setup, but that Tampa is aggressively forechecking with three forwards deep in the zone. This play is an opportunity for the Wings to catch the Tampa forwards deep and create an odd-man scoring chance. Instead, you can see that Marchenko’s already made up his mind and he ends up throwing this puck off the boards towards the near side. The play results in a near turnover and the Wings end up having to throw the puck out of the zone.

At the start of this gif there are three Red Wings behind Tatar all going off on a line change. Instead of cycling the puck back and waiting for the change to complete, Tatar decides to take on the penalty killers and ends up turning the puck over at the line. This has happened far too often, preventing the Red Wings from getting a significant amount of in-zone time on their powerplay. The Wings will have to simplify their zone entries in order to maximize their powerplay time, otherwise they will waste their greatest weapon.

Babcock’s Situational Use of Glendening’s Line

Initially, you may wonder why I would suggest the situational usage of Glendening’s line. Glendening scored the game-winning goal in Game 1, Ferraro’s tenacity has been a pleasant surprise, and Drew Miller has always been a solid two-way player. However, Mike Babcock has essentially thrown them to the dogs in the first two games. Babcock has elected to match Glendening’s line against arguably Tampa’s top line of Tyler Johnson, Nikita Kucherov, and Ondrej Palat…and the results haven’t been pretty. Take a look at this chart depicting how Glendening’s line has done against each of Tampa’s four lines.

You can see that they’ve really struggled against the Johnson line and the Filppula line. Their three shot attempts against the Stamkos line came in 51-second span of the 2nd period of game two. Babcock clearly hasn’t put them in a favorable position, as they have yet to start one of their 22 5v5 shifts in the offensive zone. I understand not wanting to put your skilled players in those bad zone start positions, but this line is clearly struggling to generate offense as well as stop shot attempts. I’d like to see Babcock try to matchup these guys a little bit more against Tampa’s 4th line which is seeing a similar amount of 5v5 ice time. Babcock will have that luxury as the Red Wings move home.

Overall, the Red Wings have a lot of work to do, but they are more than capable of hanging with Tampa Bay. The first two games may not make that obvious, but these tactical changes can increase the Red Wings chances of walking away with a win in Game 3.