NHL playoff songs are a tradition – and the 2015 Playoff Season is no exception! There are clever fans out there who put together songs for the playoffs — some original and some parodies of songs you may know and love — and some of those songs end up having a shelf life longer than their teams stay in the series. Here are the 10 playoff songs you have to hear.

1. Throw Your Wings Up – for the Detroit Red Wings

As you’d expect from Detroit, the home of Slim Shady, Throw Your Wings Up is Baby G’s contribution to the Detroit Red Wings 2015 Playoff run. Written and sung by Baby G, this is his 5th Throw Your Wings Up anthem for the Wings. This particular rendition mentions lots of the Wings’ players, as well as coach Babcock is mentioned in it, and the video looks professional, by video director Trevor Grady.

You might also want to check out another of Baby G’s hockey songs, “Nyquist Again” in honour of Red Wings’ right winger Gustav Nyquist, a parody of Chubby Checker’s 1961 hit Let’s Twist Again.

2. The Rookie Stone – for the Ottawa Senators

Ottawa and Calgary have a several contributions for Playoff songs this year. Chris Holski does the vocals in “The Rookie Stone” sung to Bob Dylan’s 1965 hit Like a Rolling Stone. It recounts Ottawa’s end-of-season turnaround with Andrew Hammond:

Gave another goalie the call, went to Montreal, did not fall
did you?

The song was produced by TSN 1200’s Matt Kaunisviita.

The Cowtown Opera has mixed classic with pop for this incredibly fun parody of Funiculi Funicula (this link is to Andrea Bocelli singing the famous Italian song). It’s only a minute long, and, as operas go, it was quite a production, put together by singers Michelle Minke, Barbara Thorson, Susan Yule, Sara Staples, Melissa Jackson and Tony Rino, the lyrics were by Dean Svoboda, Michelle Minke and Barb Thorson, the audio was done by Encore Recording, Don Kletke and arts and photography was done by Benjamin Laird.

Not only does the Cowtown Opera hit all the high notes with the important players on the team, they work in the team’s hashtag #NeverQuit which should be helping them with social marketing.

4. O-Town Funk – for the Ottawa Senators

Another Song for the Sens, Mark Ronson’s Uptown, Funk (featuring Bruno Mars) has been transformed to “O-Town Funk” in honour of the Ottawa Senators. The song mentions goalie Andrew Hammond (Too Hot, Hot Damn!) being called up from Binghamton (okay, maybe that doesn’t rhyme to well — Too Hot, Hot Damn!) and how they’ve sent other teams to retirement… The song was created by TGOR Ottawa and you can hear it here.

5. The Playoff Anthem – for the Winnipeg Jets

Ace Burpee, Swing Adam, Derek Grocholski, Tyler Walsh and BLACKLI$T Studios have put together “The Playoff Anthem” for Virgin Radio Winnipeg. “The Playoff Anthem” is a parody of Eminem’s “Without Me”. As well as an ode to the 700,00-strong Jets supporters in the ‘Peg, it laments the 19 years it’s taken for the series to return to Manitoba.

Drop the puck
And get the Stanley Cup
And then shout
True North, Strong and Free

Written by a couple of brothers, Dan O’Neill, a writer for a St. Louis newspaper, and his brother Mike, the CEO of a marketing agency, “We Want the Cup” is a catchy song that will make you want to grab your great aunt or uncle, get on the dance floor and cha-cha! The song, performed by Mike O’Neill and the hilariously named Sudden Death Over Time laments previous Stanley Cup shut downs by Bobby Orr (Boston Bruins, 1969) and Steve Yzerman (Detroit Red Wings, 1997 and 2002).

Definitely worth a listen.

7. Bring Back The Cup – for the Montreal Canadiens

Pitbull and Ne-Yo’s song, Time Of Our Lives has been transformed into Bring Back The Cup by Lukay, Vito V, and Freeway Frank for Virgin Radio Montreal. It’s packed with fun, and mentions all the Habs’ stars that you’d expect: PK Subban, Carey Price, Alex Galchenyuk, Max Pacioretty — and how Montreal has been without a cup for 22 years and winning it will give them their 25th.

The Habs are gonna win the Stanley Cup, Bro
I have my jersey on,
It’s number thirty-one

8. Something Big – for the Vancouver Canucks

This is a parody of Something Big by Shawn Mendes, performed by Marie Hui, Arielle Tuliao and Clayton Imoo. The vocals are solid and in addition to mentions of the Sedin brothers and Radim Vrbata, the song has references to the Canucks’ fans famous towels being in the air.

Sedins, Radim
They’re all on fire
Red goal light
Lights up the sky

9. All About the Flames – for the Calgary Flames

How could there not be a parody of Meghan Trainor’s hit song All About That Bass as a 2015 Playoff Song? It could have worked for a number of teams, but it’s been transformed into All About the Flames, sung by two young women who dance around a mannequin resembling Darth Vader, wearing a Flames jersey and a cape.  As to the talent behind this video, there’s not a lot we could discover, it was uploaded by mmssmm pp who thanks her boyfriend for putting it all together. 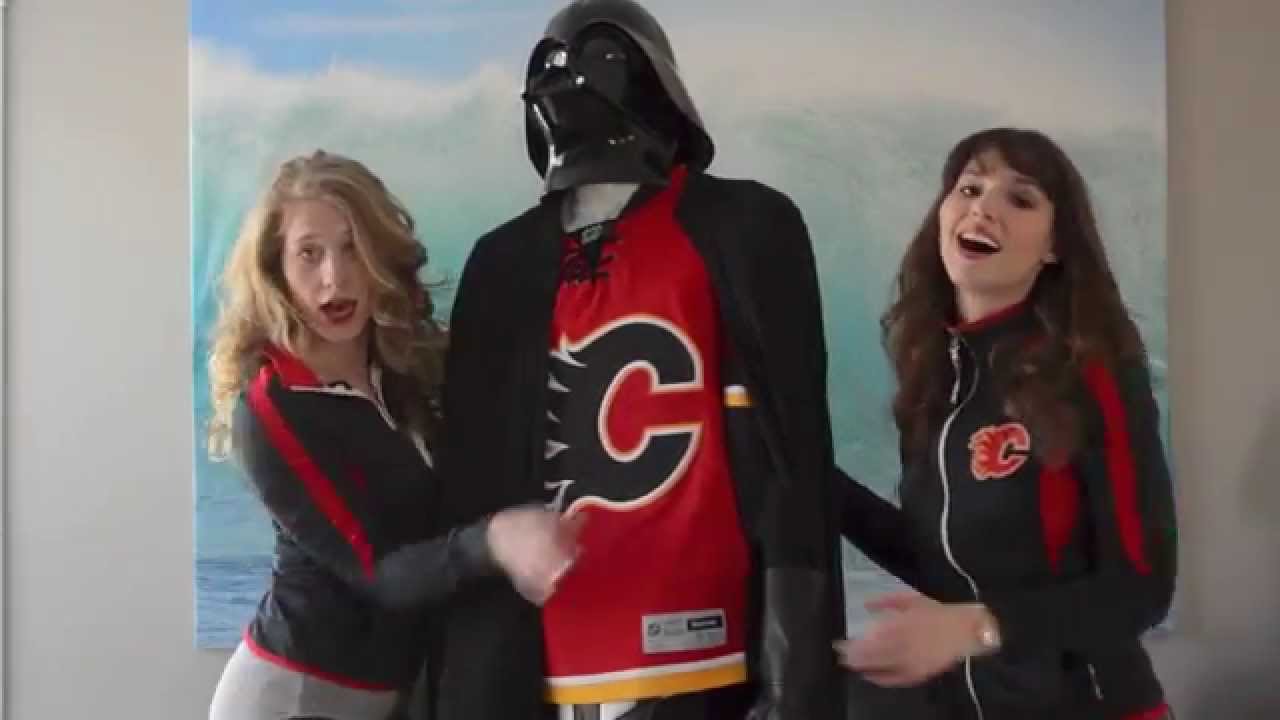 10. #InDaDome – for the Calgary Flames

It’s pretty hard not to want to throw in Jarome to rhyme with Dome, a reference to former Calgary Flames mainstay Jarome Iginla – and in #InDaDome, the third Flames Anthem to make this list, they can’t resist throwing him in either — although they say he’s not here anymore. Funny!  This 2015 Flames Playoff Anthem features Getti and Fuzzy.

Finally, one last song needs to be mentioned, another Flames Anthem, a parody of Journey’s Don’t Stop Believing, one of the most sacred hockey songs ever. It needs to be mentioned because although the lyrics are worthy of an anthem, the vocals are a bit hard to listen to — but the band, Fresh Take, admits that from the start, that they are not singers, just huge Flames fans.

You can hear their rendition here.