Talented young forwards used to be hard to come by in Toronto. The Maple Leafs always used to trade their picks or prospects in order to acquire help in the present.  Having seen that you aren’t able to build a team that way, the Blue and White have began to make changes. Build through the draft, develop your prospects and make smart trades to gather youth and talent. That is the proper way to ensure organizational depth.

The Maple Leafs have some excellent young guns coming up in terms of forwards. For the first time in a long time there is high end skill and talent just waiting to be unleashed. The Leafs are committed to taking it slow with these players so that they have a chance to learn the ropes and become acclimatized to their environment. Each brings something unique to the big club, and make no mistake, making the NHL is the end goal for all three of these players.

For the purpose of this article, I have limited my discussion to forwards who have yet to play a game for the Maple Leafs. Noting that, players like Sam Carrick and Josh Leivo will not be included as they have already suited up for the big club previously.

Brendan Leipsic was actually never drafted by the Maple Leafs. He was sent to Toronto in the deal with Nashville that saw notable players Cody Franson and Mike Santorelli shipped to the Music City. Leipsic has been described as an energetic and hard-working player. He loves to hit and constantly plays with an edge.

The former third round pick is also a skilled playmaker and passer. In 2012-13, he won the WHL’s scoring title after putting up 120 points in 68 games. He has high upside and projects to be a skilled type of player who can also grind it out and get under his opponent’s skin. Brendan Gallagher would be an apt comparison. 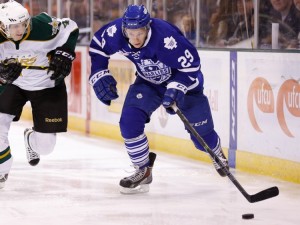 Connor Brown might just be the Maple Leafs most underrated star.  He has developed nicely in the AHL and appears to have sustained the scoring touch that made him such a threat in the OHL. Brown led all AHL rookies in scoring this year with 21 goals and 40 assists for 61 points. The former Erie Otter was also the Marlies top point getter this past season.

Brown is described as a talented offensive player with great vision and hands. He’s able to play a gritty style while also keeping tabs on his teammates on the ice for a potential set-up. He was drafted late in both the OHL and the NHL, but has been able to not only adapt, but to excel with the chips stacked against him.

The current gem of the Maple Leafs prospects, Nylander is poised to make some big noise in the coming years. The Swede has top offensive instincts that make him a threat every time he steps on the ice. He’s a dynamic and fluid skater who is able to dangle and deke his opponent’s with ease.

Nylander, the son of former NHL Michael Nylander, has had an excellent season. He began the season with Modo in the Swedish Hockey League and put up 21 points in 20 games. The he represented Sweden at the World Junior’s and put on an incredible performance. Next up was a jump to the Marlies. It took him some time to adjust to the North American ice but he finished the AHL season with 32 points in 37 games. He has all the tools to become a threat in the NHL one day.

It’s a fun time to be a fan of the Toronto Maple Leafs. The organization is going though a great change that will see a youth movement take full effect. With all the spots that are sure to open up, it’s a chance for some  of these young forwards to make a name for themselves and secure a roster spot in the NHL for the first time.