On the 14th episode of The Hockey Writers Podcast, Brandon Share-Cohen stops in to chat about what has so far been a bit of a slower news week in the NHL. That said, there are still some interesting topics to chat about.

On This Week’s THW Podcast

From Leon Draisaitl’s recent offensive run in Edmonton and his chasing down Alexander Ovechkin for the league lead in goals to the Columbus Blue Jackets early struggles since the trade deadline, there is a lot going on that will have NHL playoff implications.

Also in the news, Brad Marchand made some comments about the next contract that Mitch Marner should see when he comes due in Toronto for an extension. What did he mean by his contract comments? Was he stirring the pot or was he being genuine? Is Marner worth over $12 million per season? We’ll take a closer look.

A recent report suggests Steve Yzerman is still very much hands-on with the Tampa Bay Lighting and we ask the question, what does this mean for his future in Tampa or the rumors he might head to Detroit?

So too, this week the NHL lost the legendary Ted Lindsay and we discuss what Lindsay meant to the game and what legacy does he leave behind? He was instrumental in current player salaries and the association in the NHL. While today’s players might not know the story of Linsday’s playing career, they will certainly feel the impact he had on the NHL as they negotiate contracts and grows in the business of hockey.

Finally, we visit with former NHL’er Sean Brown. An ex-Edmonton Oiler, Boston Bruin, New Jersey Devil, and Vancouver Canucks player, Brown spent many years in the NHL but also five years playing hockey in Europe. He saw his hockey career change over time and with it watching how the game changed while he was a part of it professionally. He brings a wealth of experience to coaching and skill development for young athletes and these days that’s what he enjoys doing on a regular basis. 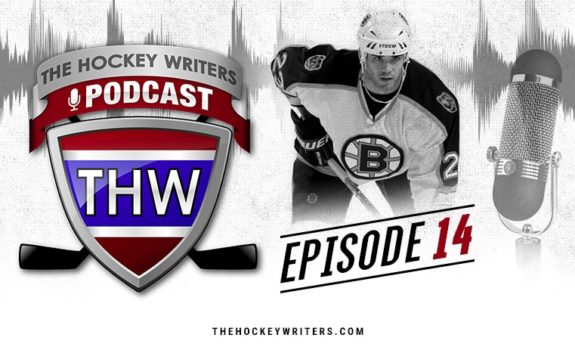 Today, Brown is currently still working in skill development, running hockey camps through Breakout Hockey and working with minor hockey teams and leagues in Alberta. We chat everything from who he follows in the NHL, the changing NHL game, what he works on with young players as they grow into hockey players and young adults and his camps themselves.

You can visit Breakout Hockey by going here.

We were able to dig deep with Sean about minor hockey but we’re excited about some potential news we might be able to announce when it comes to Brown and his future with The Hockey Writers Podcast. (I won’t put the cart before the horse, but I feel like maybe Sean got the bug for wanting to share some of his NHL stories with us on future episodes).

Where You Can Hear Our Podcast

A big thanks to all of our guests this week. If you don’t follow our guests, we encourage that you add them as well as subscribe to our podcast. You can use any of the below links to subscribe to or download our podcast each week:

Or, you can listen to any of our podcasts by visiting our Podcast Page. Or, visit The Hockey Writers Rumors Page for all the latest scuttlebutt.