The Los Angeles Kings dispatched the New York Rangers in 5 games, and claimed their second Stanley Cup in the past three seasons. Since the Kings won in 5 games, let’s take a look back at the 5 best games from this past postseason.

Game 4 of the Eastern Conference Quarterfinals saw the visiting Pittsburgh Penguins take a commanding 3-0 lead not even half way through the first period against the Columbus Blue Jackets. However, the Blue Jackets answered back late in the first period with a powerplay goal by Boone Jenner, and cut the deficit to 3-1.

Remember, the first three games of the series saw the team with a 3-1 lead lose by a final of 4-3.

In the second period, Ryan Johansen scored the second powerplay goal of the night for the Blue Jackets, and cut the deficit to one goal. The third period featured Blue Jacket shots getting stopped by the Penguins’ Marc-Andre Fleury, until a minor miracle happened with 24 seconds remaining in regualtion.

Blue Jackets’ Brandon Dubinsky scored off of a misplayed puck by Fleury, and the Blue Jacket faithful  would see an overtime playoff game — and a chance to witness the first home playoff win in Blue Jackets history.

Not even three minutes into the overtime period, Nick Foligno gave the home crowd what they wanted: a home play off win.

The Canadiens struck the Bruins with a powerplay goal from P.K. Subban in the first period, and an even strength goal from Rene Bourque in the second period.

A stunned 17,565 in the TD Garden saw the Bruins down 2-0 entering the third period. However, the Bruins would rally back. Reilly Smith and Torey Krug would each score a goal early in the third period, tying the game at 2-2. The Canadiens weren’t done, though. With a little less than eight minutes left in the third period, the Canadiens hounded Bruins’ goalie Tuukka Rask – firing shots on wrap arounds, and from point-blank range. In the chaos at the net, Brian Gionta and Bourque assisted in a snapshot goal by Francis Bouillon. The Canadiens took control of the game with a 3-2 lead, and seemed poised to take the first game of the series from the Bruins in Boston.

With less than two minutes left in regulation, the Bruins needed someone to score a last-gasp goal to force Game 1 into overtime. Johnny Boychuk would be that Bruin.

The first overtime period featured a combined 20 shots – 14 from the Bruins, and 6 from the Canadiens – and the game was still tied at 3-3.

In the second overtime the Bruins’ Matt Bartkowski committed a holding penalty against the Canadiens’ Dale Weise. This penalty proved to be costly for the Bruins chances at winning. Seven seconds into the powerplay, P.K. Subban blistered a shot past Rask, and the Canadiens won 4-3.

The Canadiens and Bruins would battle a full 7 games, with the Canadiens ultimately taking the series.

3. Kings of the West

The Western Conference Final had reached Game 7. Either the Los Angeles Kings or the Chicago Blackhawks were going to advance to the Stanley Cup Final -and attempt to win two titles in a three year window.

Both teams traded goals in the second period – Tyler Toffoli scored for the Kings, and Sharp scored again for the Blackhawks — and sent the game into the third period at 4-3, advantage Blackhawks.

With their backs to the wall, the Kings tied the game up with a goal by Marian Gaborik with less than 10 minutes remaining in regulation. With less than 10 seconds remaining, the Blackhawks’ Andrew Shaw launched a shot a Kings’ goalie Jonathan Quick, but couldn’t score. Overtime hockey was upon the people inside the United Center.

In the overtime period, The Blackhawks were able to get shots by Saad, Duncan Keith, and Nick Leddy. However, the Kings had the pivotal shot that came off the stick of Alec Martinez just to the left of the ‘Stanley Cup Playoffs’ decal on the ice. 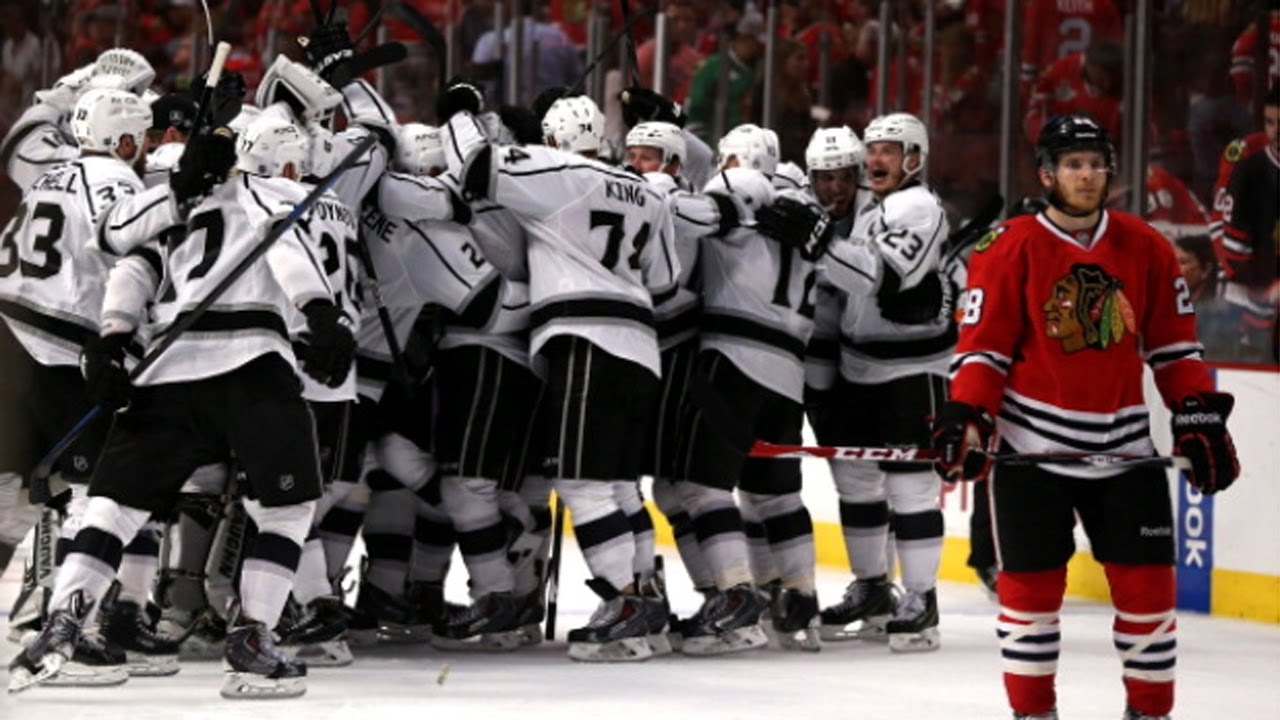 The Kings won the game 5-4, and took the Western Conference crown. The Stanley Cup final would feature an East vs. West matchup as the Kings faced the New York Rangers.

Game 4 of the Stanley Cup Final featured the Kings up 3-0 in the series on the New York Rangers. The Kings had a chance to sweep the Rangers, and win the Stanley Cup title in the Madison Square Garden.

The Kings launched 41 shots on Rangers’ goalie Henrik Lundqvist, but only scored once — a Dustin Brown wrist shot in the second period. The Rangers were held to 19 shots, but scored off a tip in from Benoit Pouliot and a wrist shot from Martin St.Louis.

Lundqvist and the Rangers defense made save after save to preserve the Rangers postseason life. The first big defensive stop came at the 8:16 mark in the first period.

The second huge stop came with less than 90 seconds in regulation. The Kings’ Alec Martinez took a pass and shot at Lundqvist, and was stopped –or so was thought. The puck bounced off of Lundqvist, and slid underneath his legs. Due to the amount of uneven ice around the net, the puck met friction while sliding, causing a makeshift ice wall to form when the puck approached the net. The puck stopped mere inches from the goal line. As hysteria ensued in either teams quest to find where the puck was, the Rangers’ Derek Stepan saw the puck, dove down, and swatted the puck out of the goal line and into the back of Lundqvist — forcing a face-off.

The Rangers held off the Kings, forcing Game 5.

1. Goodnight (Or On the East Coast, Good Morning)

After a dramatic ending to Game 4 in New York, the Rangers and Kings faced each other back at the Staples Center in Los Angeles, CA for Game 5. The Kings could clinch the Stanley Cup on home ice with a win, if not, the series would go back to New York for Game 6.

The Kings struck first with a goal from Justin Williams, and seem poised to end the NHL Season on home ice. However, the Rangers rallied back with two straight goals, and went into the third period grasping a 2-1 lead.

As we’ve seen before, the Kings bounce right back when trailing — especially in big time situations. Gaborik scored on the powerplay in the third period to tie the game, resulting in overtime hockey being played.

The first overtime in Game 5 resulted in a combined 23 shots – 10 from the Rangers, and 13 from the Kings –, but none were able to past the goalies. The game went deep into the night  — and into the morning on the East coast– with no sign of either goalie faltering with the stakes at stratospheric levels.

However, every playoff game must have a winner and a loser. Deep into the second overtime, Alec Martinez made sure that the Kings wouldn’t be the team that lost.

Game 5 of the Stanley Cup final would be the last game brought in its currently form under CBC. Rogers takes over the broadcasting rights for the next subsequent seasons.

At the conclusion of Game 5, CBC aired a montage of the best moments on ‘Hockey Night in Canada’. 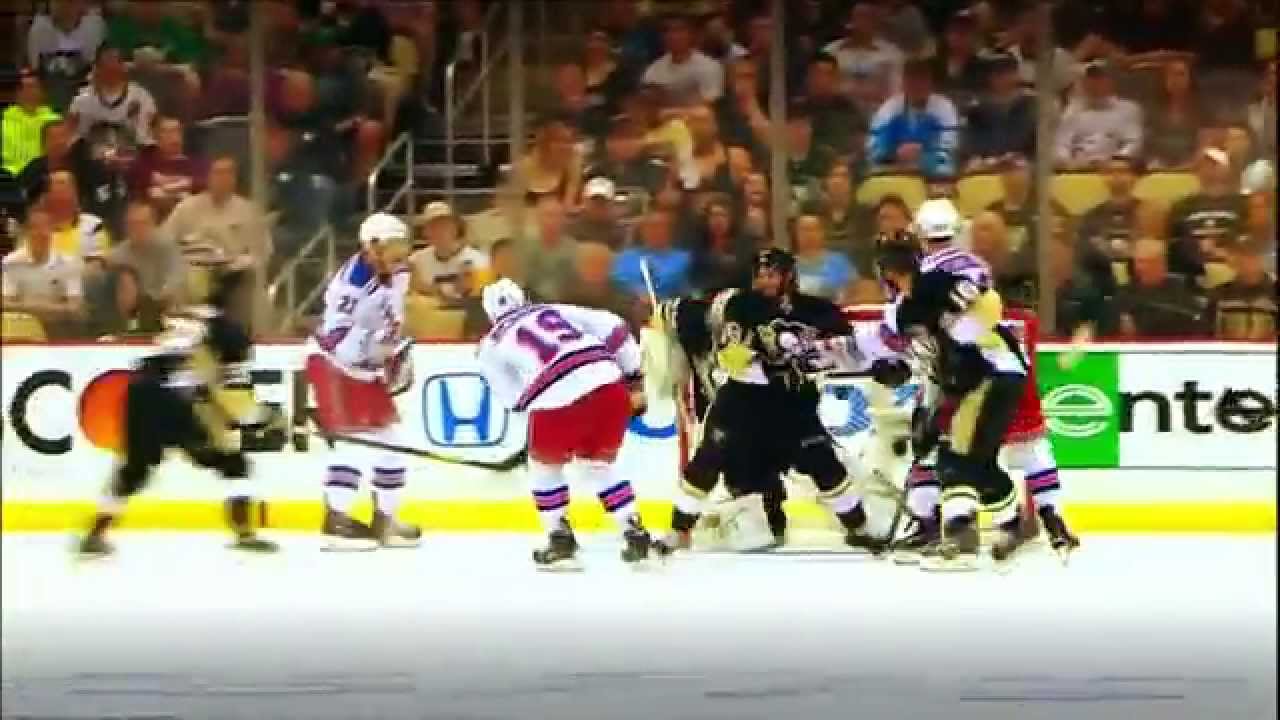 Currently a student at The Ohio State University. Play-by-Play announcer for Ohio State football, basketball, and other sports on student radio. Writer of the Columbus Blue Jackets and other sports for U Weekly Newspaper. I believe I’m the real life version of Ted Mosby.