It’s another Red October. This means that the Gateway City is engulfed in another Major League Baseball postseason as its St. Louis Cardinals are attempting to win the franchise’s 12th World Series championship.

This also means it’s the start of the Blues’ season.

Yes, the Blues are usually the kid that can’t seem to call shotgun in the car, while the Red Birds are that lucky older child who is always up front, controlling the conversation and playing with the radio dials. Despite this, the Blues are happy to be the younger brother — a winning baseball team in St. Louis only means positive vibes for the entire city.

The Blues, on the other hand, have posted a 1-1-0 record in the team’s first two games. It started last Thursday with a devastating 3-2 loss to the New York Rangers (Rick Nash scored with just under two minutes remaining in regulation). Then, the good guys trounced the Calgary Flames last Saturday, winning 4-1 and peppering Flames goalie Jonas Hiller with 39 shots.

These games go a little deeper than a box score, though. So, for those that have been completely consumed by postseason baseball, here are the top-five plays of the Blues’ young 2014-15 season.

The Blues dominated play early against the Flames, and it was hits like this that kept the Blues working in the offensive zone. Although St. Louis was credited with just 14 hits, the forecheck was strong and led to many opportunities. Ott finished with three hits on the night, which led his team.

The Rangers took an early 1-0 lead on Nash’s first goal of the season and the scoreboard stayed that way until Jaden Schwartz scored early in the third period. The Rangers answered back with a Chris Kreider breakaway goal, but it was the St. Louis kid who evened the game at two goals apiece. Stastny led the rush into the Rangers’ zone and dropped it to Blues sniper Vladimir Tarasenko, who fired a shot from in tight that beat Henrik Lundqvist. Although announced as Tarasenko’s goal, it was later credited to Stastny — his first as a Blue.

With the Blues leading 3-0 early in the second period, it was up to the Blues’ defense and goaltender Brian Elliott to hold down the fort and keep Calgary off the board. In this play, the Blues lost the defensive-zone face off and the puck slid to the point. Elliott made the initial save, but the rebound popped back to the center. Forward Paul Byron was there to gather the puck, while Elliott scrambled in his crease. Byron’s turnaround shot hit off a Blues defenseman and Elliott, while on his back, recovered nicely to snag the puck in midair and stop play. Although it wasn’t the most graceful save, it was key for the Blues to coast to a 4-1 victory. 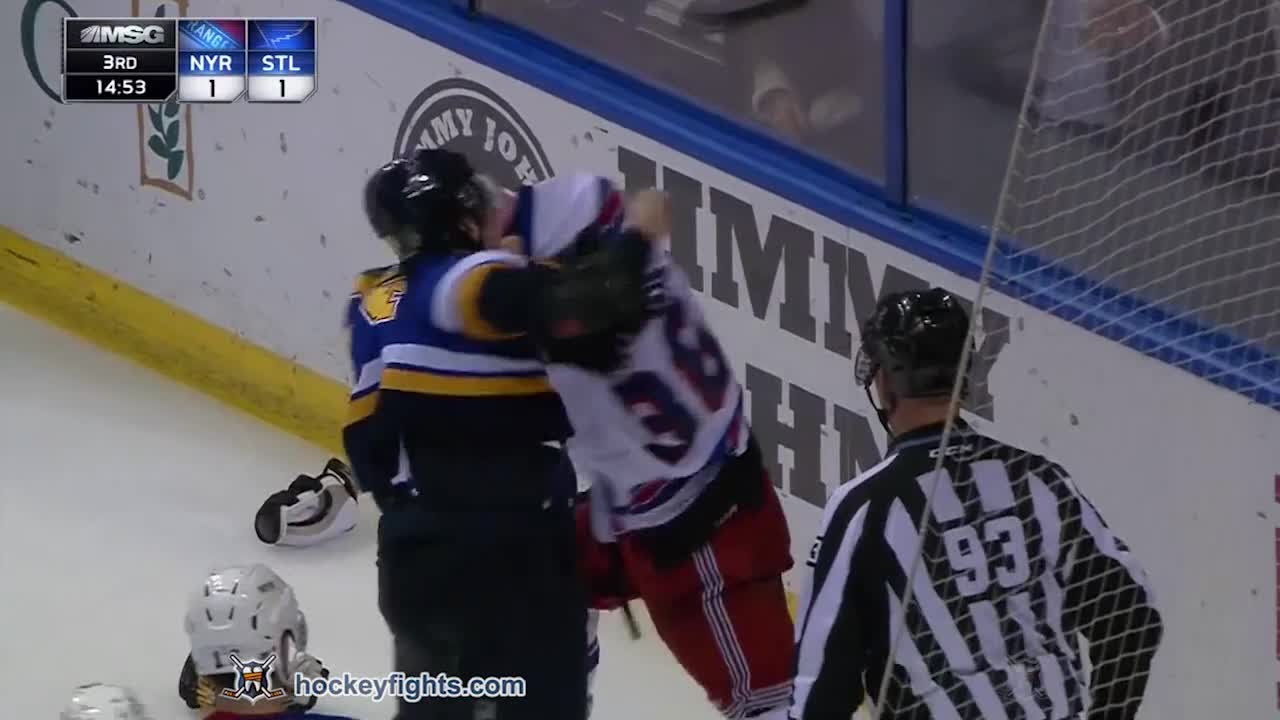 Although Zuccarello only stands at 5 feet, 7 inches, he is a tough player to knock off the puck while also being one of the hardest workers on the Rangers’ squad. Oshie is 4 inches taller and is known for the same attributes. It’s no wonder these two found each other during play, but a fight was something nobody could have predicted. It was Oshie’s third career NHL fight, and likely his first career no-contest victory. The fight seemed to re-energize the Blues’ squad, but, unfortunately, it was the Rangers who scored next (Kreider).

Just two days after the Blues’ loss to the Rangers, the Blues took to the ice again, hoping to earn the team’s first victory of the young 2014-15 season. Lindstrom got his squad off to a good start. The Blues broke out of the zone and suffered miscommunication in the neutral zone, which appeared to provide the Flames with a breakout opportunity. The Flames experienced the same issue, leading to a turnover at the Calgary blue line and a three-on-one in favor of Alexander Steen, Paul Stastny and Joakim Lindstrom. It was a tic-tac-toe play that was capped off by Lindstrom’s first NHL goal since Oct. 13, 2011.

1 thought on “Video: Top 5 Plays of the Blues’ Young Season”