It’s been nearly two weeks since the Vancouver Canucks announced that prized 19-year-old Bo Horvat would be sticking with the NHL club for the foreseeable future, and not head back to his OHL team, the London Knights.

The video of Horvat learning he’d be sticking with the Canucks can be seen below.

It is arguable that Horvat has been the most prized, talked about and closely watched prospect to be drafted by Vancouver since the Sedin twins were taken second and third overall all the way back in the 1999 NHL Entry Draft. One of those reasons being of course that Horvat is the only return the Vancouver Canucks got for goaltender Cory Schneider.

The Canucks traded to get Bo Horva but he still needs some AHL time.t (Ed Mulholland-USA TODAY Sports)

Horvat nearly made the Canucks out of training camp last September, but was ultimately returned to the OHL, a move that in retrospect probably helped the young centre more than hindered. He avoided the disaster that was the short-lived John Tortorella era here in Vancouver, avoided the Roberto Luongo and Ryan Kesler fiascos and avoided the toxicity that enveloped the team from January to April.

Instead Horvat had a strong third season for the Knights, notching 30 goals for the second straight season, playing for Canada at the World Junior Hockey Championships and leading the Knights to their third straight Memorial Cup, although only as the host team rather than the OHL champions.

It was a year that no doubt had significant impact on his situation coming into camp this year.

While a strong start to training camp was eventually halted by an injury that cost Horvat the early part of his season, a quick recovery and a decent showing to begin camp allowed Horvat to stick with the Canucks, and make his debut in Denver on November 4 against the Colorado Avalanche.

He has since played an additional 15 games and has shown his worth as a fourth liner and penalty killer, along with many other reasons as to why he has stuck in the NHL.

The day before Horvat made his Canucks debut, the team sat an abysmal 27 overall in the league in face-off win percentage at 46.9 per cent, above only Florida, Calgary and Buffalo. Henrik Sedin was the Canucks top centre, winning draws at a 51.2 percentage rate.

In an early season push, chalked so full of positives the Canucks woes in the face-off circle was well documented in the city.

Horvat has been the focal point for that improvement by the Canucks. He leads the team winning 56.2 per cent of his draws, with many of those wins coming against some of the premier two-way centres, and top face-off men in the league. 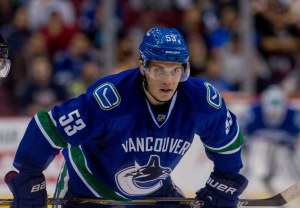 The names of players Horvat has taken to task in the dot include, Ryan Kesler, Jonathan Toews and Anze Kopitar, a who’s, who of elite centres in the game.

His top two statistical nights in the face-off circle, in fact have come against the Ducks on the road, where he won 75 per cent of his draws, although only playing 12 shifts that game, and two weeks later he schooled Blackhawk centres all night to the tune of 81.25 per cent, a truly impressive number considering the veterans the Blackhawks have playing down the middle.

The Blackhawk game really stands out as to why Horvat remains in Vancouver.

His face-off game is strong, especially for a 19-year-old, but it’s his maturity on the ice that really stands out.

In the game against Chicago, a 4-1 Vancouver win, the game in which Daniel Sedin played his 1000 career NHL game, Horvat logged 14:27 of ice-time on 20 shifts, numbers that nearly matched his career highs from his third career game against Los Angeles over two weeks before.

The difference, Horvat wasn’t being given garbage time ice in a blowout loss like he was against the Kings. He was being given primetime minutes against one of the best teams in the NHL the previous five seasons in a big win.

That game saw Horvat dominate at times, even against top Chicago players. He racked up three assists and went over 80 per cent on draws. He was strong on his feet and protected the puck well along the boards. It really said something about his game that he was given minutes late in the third period with the Canucks up by only two.

It was really no surprise when the next day head coach Willie Desjardins announced to the team that Horvat would be staying with Vancouver.

So, what’s left that stands in Horvat’s way in Vancouver?

For this season at least, Horvat could be hurt by the numbers game. When veteran players Zack Kassian and Shawn Matthias both return from injury that’ll leave the Canucks with 13 forwards on their active roster. Who will sit?

Matthias played like a bull in a china shop for the month of November, taking the puck to the net at will and anchoring a solid third line. Kassian for his part showed signs of improvement this year, but still seems disinterested at times and is a streaky player.

The obvious choice for exclusion from the lineup seems like Linden Vey, but his play at the tail end of this road trip picked up and he’s a key piece of the first unit power play with the Sedins and Vrbata.

At the end of the day, Horvat’s play has been too good for him not to get slotted into the lineup, whether that means a rotation of players such as Vey and Horvat sit depending on play, or even someone like Brad Richardson is forced from the lineup for a game, it looks like it’s critical that the Canucks get Bo into the lineup.

After years of never ending goalie controversies, a lineup problem is something nice to have in Vancouver for a change.