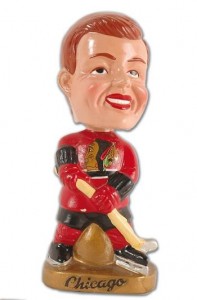 Don’t agree with my selections or the order of ranking? Let me know.

In the eight seasons between 1933 and 1940, the Toronto Maple Leafs went to the Stanley Cup Final six times and lost them all. Just about every other team in the NHL of the 1930’s took a turn at beating the Leafs for the Cup. The most embarrassing final series came in 1938 when the Chicago Black Hawks, with a dreadful regular season record of 14-25-9 and the least goals-for total in the league upset Toronto to win the Cup. In the first game of the Final, the Hawks were without a healthy goalie and team captain Johnny Gottselig went to town looking for a minor league netminder named Alfie Moore. He found him after searching a local tavern. Alfie had already consumed a few, but he was sobered up as best as possible in time for the opening game. Miraculously, he stoned the Leafs, giving up just one goal in 60 minutes of play. Chicago won the game 3-1 and went on to win the best-of-five series 3 games to 1 for the Cup.  Alfie Moore became the legendary Hawks’ Cup hero of 1938. 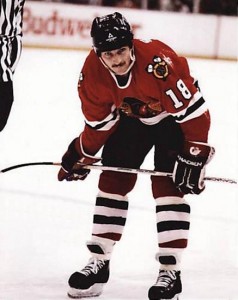 Denis Savard ranks second to only Stan Mikita in all time playoff points for the Chicago Blackhawks. Savard and the Hawks reached the Conference Final five times during the 1980’s, but 1985 was by far his best contribution with 29 points in 15 post-season games.  Like every good team of the decade, the Hawks eventually had to face the unstoppable Edmonton Oilers. Savard still shares the team record with Jonathan Toews for most points in one playoff season.

The Golden Jet led the league in playoff scoring in 1965. His 10 goals and 7 assists propelled the Hawks all the way to Game 7 of the Finals. Had it not been for a disappointing 4-0 shutout at the hands of the Montreal Canadiens in the deciding game, Hull may well have been the first ever winner of the Conn Smythe trophy. 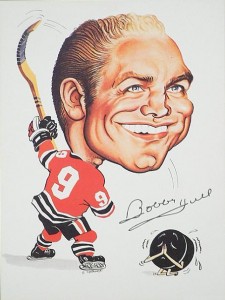 Bobby Hull’s indefatigable play throughout the 1971 playoffs contributed greatly to the club’s march all the way to Game 7 of the Finals. His 25 points in 18 games were second only to Frank Mahovlich of the Canadiens. Hull’s dramatic 1971 playoff season was complete with game-winning goals and overtime heroics. Once again, had the Hawks been able to defeat the Canadiens in Game 7 of the finals, Hull would have most assuredly been named winner of the Conn Smythe. 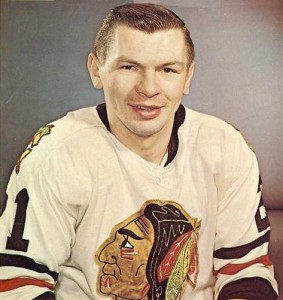 brilliant playoff season by Black Hawk “Stan the Man” was wasted. Mikita’s 15 assists and 21 points were playoff records, all accomplished in just 12 post-season games.  He led all other playoff scorers by a large margin. Mikita was recognized as the 1962 playoff MVP even though the Conn Smythe trophy was only to be first presented three years later in 1965.

Patrick Kane’s 28 playoff points this year was third best in team history. Playing alongside Jonathan Toews didn’t hurt his numbers. Scoring the Cup-winning goal in overtime will add to his legacy in time. Kane, a first overall draft choice in 2007, came through when it counted. At 21 years of age, he has already accomplished so much and this playoff year was the crowning pinnacle, so far. 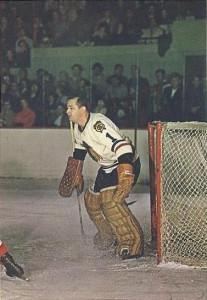 Mr. Goalie was, without argument, one of the best goalies of all time and 1961 was his moment of absolute glory. In backstopping the Black Hawks to their first Cup victory in 23 years, Hall bested his legendary opponents Sawchuk and Plante with a sparkling 2.02 GAA in the playoffs. His magnificent 3-0 shutout in Game 6 of the semi-finals against Montreal officially ended the Canadiens’ 5-year Stanley Cup dynasty. With a Stanley Cup victory under his belt, Glenn Hall ruled.

Goaltender Charlie Gardiner died of a brain tumor at the age of 29 only two months after he guided the Black Hawks to their first Cup victory in 1934. The story of his outstanding playoff performance in 1934 has been passed down through generations. Gardiner had won the Vezina as the NHL’s top goalie in 1933-34. Recognized for his leadership, he was team captain at the time. Through failing health, he only lost one game during the 1934 playoffs, putting up a dazzling 1.33 GAA and recording two shutouts. Before the Cup-clinching game, he told his teammates to just get him one goal. The game went into double overtime before Mush March ended it with the only goal of the contest. The Black Hawks were champions. Soon after, Charlie Gardiner left this world as the very best at what he did.

Like his teammate Patrick Kane, young team captain Jonathan Toews has already achieved the ultimate goal. His playoff performance this year was tremendous and he became the very-deserving first Blackhawk in team history to win the Conn Smythe trophy. His 29 points in 22 games tied an all-time team high. He was one of only three centers in this season’s post-season to exceed a 60% faceoff success rate. It’s tough to argue with the selection of “Captain Serious” as MVP. He’s on top of the world right now.

A few years ago, a SIHR research committee, reinforced by prominent hockey historians Brian McFarlane and representatives from The Hockey News voted on a retro Conn Smythe trophy list. In other words, they picked playoff MVP’s for each year from before the Conn Smythe was first presented in 1965. For 1961 when the Chicago Blackhawks last won the Cup, the clear choice was defenseman Pierre Pilotte and for good reason. Pilotte set playoff records for points and assists by a defenseman in one playoff season. His 15 points tied Gordie Howe for the 1961 league lead. He had points in every game but one and assisted on an incredible six of eight game-winning goals. In 1961, Pierre Pilote actually outshone superstars Bobby Hull and Stan Mikita. His just reward, apart from the Cup, was team captaincy for most of the 1960’s. Pierre Pilotte, 1961 – Number one. 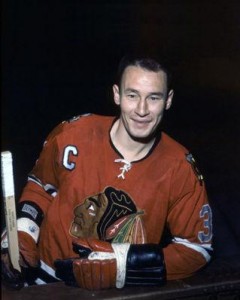