It wasn’t the awards show to top all awards shows, but it was a steady improvement from last year’s awkward debut in Las Vegas giving hope to a league scratching to get onto the national radar.

Prior to the show, fans got a chance to get up close and personal with their favorite NHL stars on the red carpet.  Despite the Vegas heat, players took the time to sign autographs and mingle with the crowd.

Snoop Dogg was billed as the opening act, but wasn’t in attendance.  Due to a “scheduling conflict”, he was forced to tape his performance a day earlier.  The Snoop-less start didn’t dull the enthusiasm of the crowd though.  Fans were louder and more enthusiastic than last year and gave the show the energy it needed.

Celebrities like Mark Wahlberg, John Slattery, Jamie Kennedy, Michael Rosenbaum, and Jerry Bruckheimer all made appearances, but it was the players that stole the show with their unexpected jokes and impromptu reactions.

Ovechkin and Duncan Keith will learn their lesson for waiting for applause during their acceptance speeches.  Both players were startled to see the show moving on before they had a chance to finish their thank-you’s.  Ovechkin was able to wrestle the spotlight back from VERSUS’ Reese Waters, but Keith wasn’t so lucky.  His speech was cut as the program moved to a pre-recorded piece for the NHL’s Foundation Award, the lights went out, and a stage hand moved in and swiped away his microphone as he waited in hopes he could imitate Ovechkin’s strategy.

Jose Theodore delivered the most inspirational speech after winning the Masterton Memorial Trophy for perseverance and dedication to hockey.  Ovechkin led the crowd in heavy applause throughout the acceptance speech and Theodore’s reflection gave fans a new appreciation for the struggles the soon-to-be free agent overcame in the past year.

I thought this might be the year the Selke Trophy went to someone other than Pavel Datsyuk, but Ryan Kesler’s brand name isn’t quite strong enough yet.  Datsyuk took home the award for the third-straight season and delivered a very poetic, wedding-reception-type-speech thanking everyone (in broken english) including management…for paying him.

The only real shocker of the night was the Hart Trophy going to Henrik Sedin.  With it seeming inevitable that one of the NHL poster boys Ovechkin and Sidney Crosby would be leaving with the award, Sedin took home the biggest prize of the night.  After continuing to score at a torrid pace despite missing twin brother Daniel for a substantial portion of the season, it was refreshing to see Sedin get the respect he deserved.

Yahoo’s Greg Wyshynski has an interesting breakdown of the votes for each award and while the winners came out mostly as expected, some of the underlying votes were…curious.

Mike Green for the Hart Trophy?  Jeff Schultz for the Norris? Ovechkin 1st-place vote for Selke? How did Mike Babcock get two first-place votes for the Jack Adams? Vincent ‘Mr. Spear’ Lecavalier for Lady Byng?  And the craziest of them all…Georges Laraque for Lady Byng?!  Some things just can’t be explained. 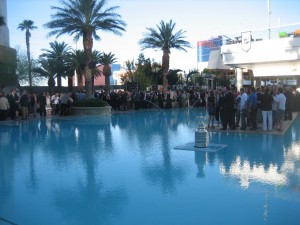 Afterwards, players, team personnel, celebrities, and fans moved over to the pool area at the Palms where the fan-friendly former stars like Brett Hull and Ted Lindsay were occupied by a steady flow of fan photographs.

The highlight of the night came when Bobby Ryan and Ryan Getzlaf participated in a hilarious skit revealing both player’s great sense of humor. A piece like this is exactly what the NHL should continue to do in future award shows to give fans a look into the unique personalities of it’s players from all over the world.

2 thoughts on “An Evening In Vegas: NHL Awards Show Recap”