If Scott Wheeler of The Athletic is correct, the answer to whether Jake Gardiner or Connor Brown will be with the Toronto Maple Leafs next season is a solid “no.” Jim Parsons, in his most recent The Hockey Writers’ podcast, interviewed Wheeler and what he had to say about Maple Leafs’ salary cap next season woes was interesting. Wheeler reported that, although the Maple Leafs would like to keep both players, they will be forced to make some difficult salary-cap decisions that will result in these two players’ likely departure from the team.

Basically, it comes down to dollars and cents, or perhaps dollars and sense. As Parsons and Wheeler discussed how the Maple Leafs would handle next season’s salary cap issues, Wheeler noted that there was little choice except to move these two players.

Wheeler, who covers the Maple Leafs for The Athletic, spoke matter-of-factly about the move. He named a number of problems that necessitated it. Problem one is that there’s no way Patrick Marleau will waive his no-movement clause. That leaves the Maple Leafs stuck for another season with Marleau’s $6.25 million contract. 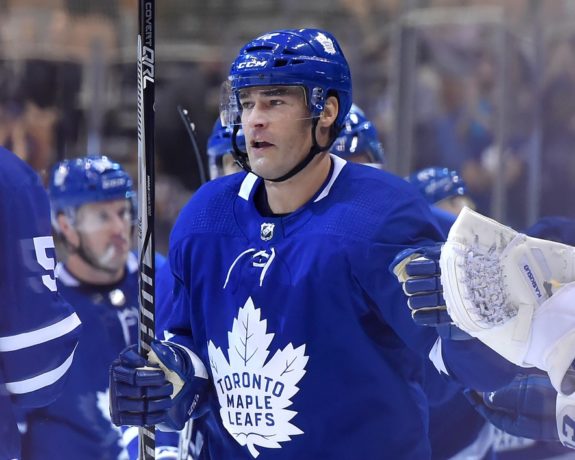 Although some contracts age well and become bargains for the team, this contract is not one of them. Marleau is one of the good guys, but his contract has become a drag on the team’s budget moving forward. No one should blame him for asking the Maple Leafs to honor the remainder of the contract, however, the simple fact is that he is no longer producing like a top-six player.

Problem two is Nikita Zaitsev’s contract, which is also too high when compared to the value he brings to the team. This contract is also a drag on the team’s salary cap. Zaitsev is making $4.5 million, which is too steep a price for a non-scoring defenseman who’s basically killing penalties this season. He’s one of former Maple Leafs general manager Lou Lamoriello’s signees in 2017 and his contract is one I’m certain current general manager Kyle Dubas wishes he hadn’t inherited.

As noted, the team would really like to keep Gardiner because of his value on the second power-play unit and the fact that he eats up minutes at even strength, and only financial reasons necessitate the move. My belief is that after Gardiner’s treatment at the hands of fans, and after dealing with his nagging back injury, he might actually look forward to starting next season with another team. I’m thinking the Minnesota Wild, because Minnesota is home for him.

Related: Why Jake Gardiner Will Leave the Toronto Maple Leafs

The Brown move is also financially motivated. Although his contract is only $2.1 million and Brown is signed through the 2019-20 season, Wheeler’s take is that this contact could be replaced by similar value at a cheaper cost. With Tyler Ennis’ emergence as a depth winger, who’s valuable on every line from the first to the fourth, Brown seems expendable. He simply didn’t show he could contribute on the fourth line. I also believe next season’s fourth-line budget has to be below $2 million, which cuts Brown out.

The Maple Leafs must move salary to address two needs. They first need to re-sign Andreas Johnsson and Kasperi Kapanen. Moving Gardiner and Brown will free up salary cap space that allows the Maple Leafs to sign both young players to what Wheeler believes will be bridge deals.

The second need is that the Maple Leafs must reshape their rear guard next season. Moving Zaitsev’s contract would help them accomplish that goal. The team’s 2019-20 defensive core will be led by Morgan Rielly, Travis Dermott and Jake Muzzin and will also feature a number of young and promising defensemen who are already in the system and will move up from the Toronto Marlies. 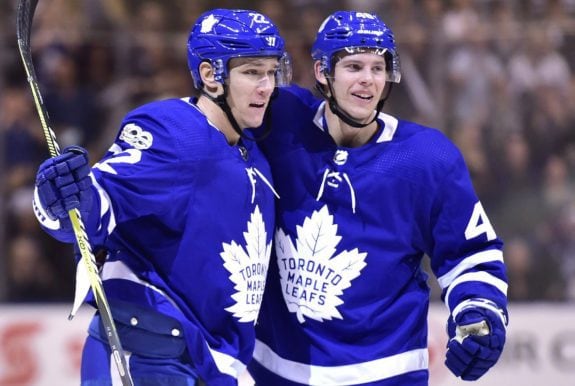 I’m unsure if 27-year-old Martin Marincin fits into the Maple Leafs’ plans. He has had two assists in three games since coming up again from the Marlies on Feb. 27, but he’s never had more than seven points in a season. He also doesn’t seem to be on other teams’ radars, because he easily passes through waivers. He’s played 18 games with the team, but seems expendable.

The 27-year-old Justin Holl has skated in five games with the Maple Leafs this season, and recently had an assist in the team’s comeback win against the Philadelphia Flyers on Friday evening. But, for the most part he’s seeing little ice time and certainly hasn’t earned coach Mike Babcock’s trust. It’s hard to say where he fits into the team’s plans. He’s low on the Maple Leafs’ blue line depth chart, despite being a needed right-hand shot.

Looking forward to next season, some of the Maple Leafs’ current defensemen no longer fit. I don’t see the team re-signing Ron Hainsey. And, I see Zaitsev leaving because, although he too is a right-handed shot, he isn’t worth his $31.5-million contract. As well, I don’t think Igor Ozhiganov has progressed as much as the team’s management thought he might. He’s an RFA and, although his current contract at $925,000 fits the team’s budget, I can’t see Dubas offering him much of a raise. 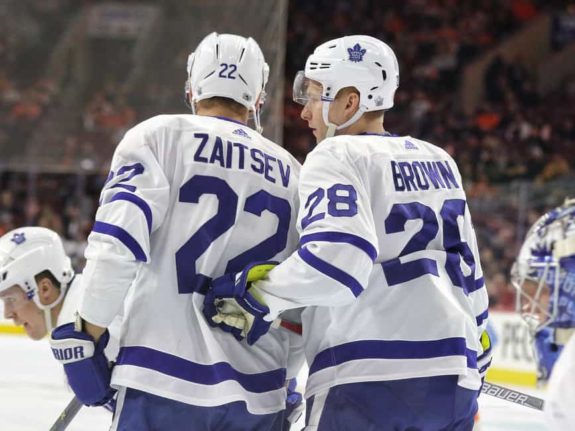 The Leafs need to find some significant depth scoring – especially from guys like Connor Brown. (Amy Irvin / The Hockey Writers)

If Wheeler is correct, Gardiner and Brown will no longer be with the team. I’ve heard nothing about where Gardiner might land, but there was speculation before the trade deadline that the Edmonton Oilers were interested in trading for Brown. With salary cap issues looming, next season’s team is likely to be much different. And, part of that make-over will be good-byes to both Gardiner and Brown.