The Rangers find themselves down 2 -1 in the Eastern Conference Finals due to their sloppy and embarrassing play. The Rangers came out strong in the first period going up two goals to none but that quickly dissolved with their lack of defense and goaltending. This was a game that the Rangers deserved to lose and need to learn from in order to come back.

The dynamic triplets line has accounted for 25 of Tampa Bay’s 47 goals in the playoffs. The Rangers are just another team in the playoffs that have found no answer for them. Tyler Johnson, Ondrej Palat and Nikita Kucherov are combined for four goals in a 6-5 overtime win against the New York Rangers on Wednesday

Johnson and Palat were unstoppable once again in Game 3, as their second period goals were the turning point in Tampa Bay’s come back. Kucherov’s game-winning tally was the nail in the coffin for the New York Rangers as he capitalized on a shot from 40 feet out in front of Henrik Lundqvist.

Johnson continues to ride a record rookie season as his second period goal tied him with Brad Richards for most goals (12) in a Lightning postseason. He leads the league in playoff goals and points. 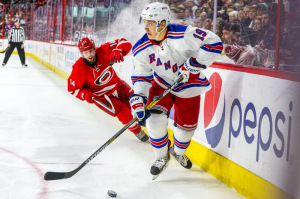 Head Coach Alain Vigneault asked his top line to step up and play like top line forwards, clearly the only one to hear him out was Jesper Fast as Rick Nash and St. Louis appeared invisible in yet another crucial playoff game.

Fast, entered the game with one goal in the playoffs, exploded into play and gave the Rangers a two-goal lead in the first period. Fast became the first Rangers rookie to score multiple goals in a game since Brandon Dubinsky in Game 3 of the 2008 Eastern Conference quarterfinals against the Devils.

Fast has been a crucial player for the Rangers and is finally being rewarded. He  has registered six points through three goals and three assists in his past 10 games, including four points, two goals and two assists, in the past six games.

According to Elias Sports Bureau, he became the first Rangers rookie to produce a multi-goal game on the road in the playoffs since Mike Ridley, during Game 1 of the 1986 Patrick Division semifinals against the Flyers.

“He’s been playing really good for us,” Derek Stepan said. “Me and Chris Kreider have built a little chemistry with him, so it’s good.

When you’re having as strong a game as Fast the last thing you want to do is lose. “It’s tough to lose this game,” Fast said.

Henrik Lundqvist is now the 1st Rangers goalie to allow 6 or more goals in consecutive postseason games since Gump Worsley, 1958. This is not the type of record Lundqvist is known for breaking.

Lundqvist has fallen victim to the Tampa Bay Lightning as this has not been the only series that Lundqvist has had trouble against the Lightning. Tampa has blown out Lunqvist 6-3 and 4-3 during the regular season bringing his record to 1-5 against Tampa with a 4.51 goals against average, and .840 save percentage.

In games where Lundqvist allowed 5 or more goals during the regular season and playoffs, Tampa lingers on the board 4 times.

“It’s a tough one. It really is,” he said. “It’s really challenging for me the way they move the puck. The way they find open ice in the slot, and scoring chances right in front. I just need to dig deep here to try to be more consistent with my game plan. Try to challenge the shooter then they pass and sometimes you stay back. As a team, if we can be a little bit better, but also I have to be better. Honestly, you’re not going to win if I give up six goals.”

Like Carey Price has, Henrik Lundqvist experiencing difficulty all season trying to hold back the powerful TB offence pic.twitter.com/ytcyWpBApN

Each team throughout this series so far have had their fair share of turnovers and defensive end mistakes. The only difference between the two teams seems to be that Tampa is capitalizing on the opportunities and the Rangers have not which is making all the difference in this wild series.

A major turnover in Game 3 came from Dan Boyle in the first period. It was not per say the deciding factor of the Rangers loss but it was certainly a huge killer of the momentum that the Rangers had built after having a 2 goal lead.

Rangers captain Ryan McDonagh was a strong offensive presence on the ice having a goal and an assist in a game of scoring frenzies but he was also a contributor of the Rangers defensive crumble sporting a minus-2 rating. Along side McD was Marc Staal and Dan Girardi, the Rangers top defensemen who had a combined minus-5 rating.

Keith Yandle played what could be seen as his best game of the playoffs so far with two assists and a plus-2 rating.

Rick Nash has been invisible throughout the playoffs. When you have a leading scorer in Rick Nash delivering throughout the regular season with a team leading 42 goals and not producing in the playoffs it shows at the end of the game when you’re down in the series. A team can’t place the blame on one player but when the lack of scoring is showing in dramatic fashion something’s gotta give. Over the last three years, Nash is eighth in the NHL in goals (89) and fifth in goals per game (0.47). Over the last three playoffs, in 51 games, Nash has scored six goals; one in 2013, three in 2014 and two this year. It’s hard to win games when your best players aren’t at their best.

This Eastern Conference Final is far from over and the winner of this series is up in the air.