Jonathan Marchessault and William Karlsson also scored to help the Golden Knights win for the 10th time in 13 games. Marc-Andre Fleury, making his 11th straight start, stopped 23 shots to take over the NHL victory lead with 18.

Anthony Beauvillier and Adam Pelech scored for New York. The Islanders have lost six of eight (2-4-2). Robin Lehner finished with 14 saves to fall to 0-4-2 in his last seven appearances.

Nosek put Vegas ahead when he jumped on the rebound of a shot by Oscar Lindberg at the right side as neither Lehner nor defenceman Thomas Hickey immediately went for the puck, and put it in for his third 3:32 into the third.

Pelech nearly tied it about three minutes later as his shot rang off the goalpost.

New York pulled Lehner for an extra skater with a little more than a minute remaining, but couldn’t get the equalizer.

The Islanders failed to score on their lone power-play chance to fall to 1 for 28 over the last 12 games.

Fleury made successive stops on Mathew Barzal in front about 6 1/2 minutes into the second period to keep the score tied 1-1. 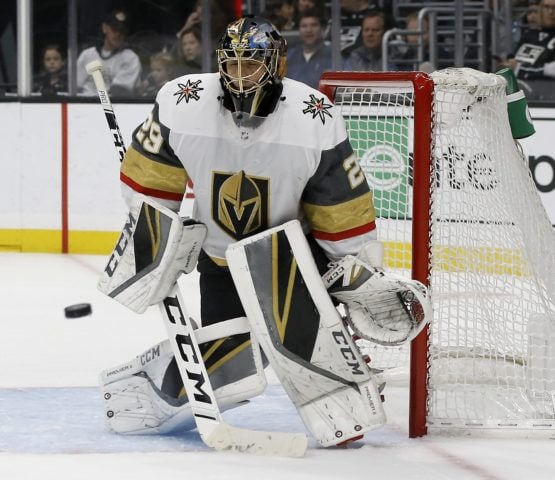 New York then went ahead when Barzal brought the puck up the left side on a rush, stopped and sent the puck to Pelech at the centre point and the defenceman fired it in for his third with 8:41 left. Barzal got his second assist of the game and team-leading 22nd of the season.

Lehner stopped a tip try by Ryan Reaves a minute later to preserve the Islanders’ lead. New York’s Josh Bailey had a tip attempts and a follow backhand in front with about six minutes remaining in the second, but Fleury denied both.

After a giveaway by Islanders defenceman Nick Leddy, Karlsson tied it 2-2 with a shot from the right circle for his 11th with 3:29 left in the middle period.

Vegas went on the power play just 19 seconds into the game when the Islanders’ Casey Cizikas was whistled for cross-checking. The Golden Knights took advantage just 15 seconds later as Marchessault got a pass from defenceman Colin Miller in the right circle and beat Lehner up high from the dot for his 12th.

Beauvillier tied it less than three minutes later. He took a pass from Johnny Boychuk in front and beat Fleury through the five-hole at 3:17 for his ninth.

Vegas defenceman Brayden McNabb briefly left the game midway through the opening period after getting hit in m the mouth with a puck while he was sitting on the bench.

NOTES: The start of the third period was delayed about 15 minutes due to a lighting issue in the arena. … Karlsson has six goals and seven points in his last nine games. … Marchessault needs one point for 100 with the Golden Knights. … Lindberg’s assist on Nosek’s goal gave him five points in his last five games. … The teams conclude the season series at Vegas on Dec. 20. … The Islanders, who won both meetings last season in Vegas’ inaugural campaign, were the last team the Golden Knights had not beaten. … Islanders F Andrew Ladd, sidelined with a lower-body injury since Nov. 13, celebrated his 33rd birthday. … Beauvillier has eight goals and 10 points in his last 13 games.

Beauts Maddie Norton Making the Most of Her Opportunities