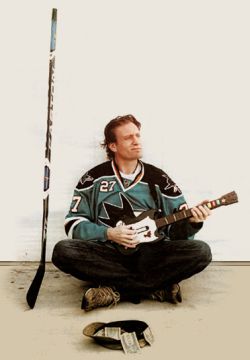 Here’s an interesting tidbit for you to chew on: Not only does Jeremy Roenick have his own page on IMDb, but he actually has acting credits attached to it. Yeah, I had to read that again myself, and I wrote it. So what are these small screen gems? They include:

– “Assistant Coach” on one episode of CBS’ The Ghost Whisperer. The episode was titled “Giving Up the Ghost,” but trust me when I tell you that Jennifer Love Hewitt remains clothed throughout. I mean come on, it’s a family show ferchrissakes.

– “Desk Sergeant” on two episodes (hey, a recurring role!) of another CBS classic titled Hack. Remember that one? If not that’s probably because it lasted about as long as a cheese cake in Rosie O’Donnell’s refrigerator.

Roenick also appeared as himself on two episodes of HBO’s Arliss (or Arli$$ if you’re a film purist), but I guess you could still technically call what he did on the show acting.

And now comes Roenick’s newest foray into the world of glitz, glamor, and judging from the acting in the clip below, more than one take. Ladies and gentlemen, I give you Jeremy Roenick in his star-turning role as “Building Security Guard” on TNT’s Leverage.