The Edmonton Oilers are bad….again.

This was supposed to be the year for marked improvement. Not necessarily the year to make the playoffs, but at least be in the hunt and push for a spot.

New additions like Benoit Pouliot, Teddy Purcell, Mark Fayne and Nikita Nikitin were supposed to plug some of the holes and make the team bigger and harder to play against.

Instead, the team finds itself in a very similar situation to the past few years. Those in the analytics field will tell you that there has been some improvement and that there have been some minor positive steps taken.

The eye test will tell you, even if that’s true, it’s not showing up on the ice.

GM Craig MacTavish appears keen on making a deal to shake things up and bring some new blood in. While he does not appear to be afraid to pull the trigger on something significant, he is very reluctant to deal from the young core of Taylor Hall, Jordan Eberle, Ryan Nugent-Hopkins or Nail Yakupov. 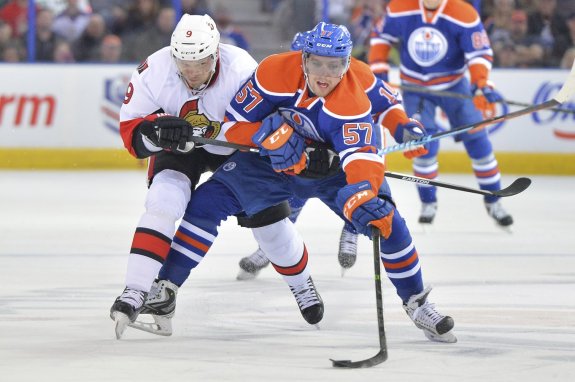 He has instead dangled players such as Benoit Pouliot or David Perron. Now if he can get something significant back for one of those players and fill a need, it may be worth monitoring to see if there is any improvement in the dressing room or on the ice.

Realistically though, to bring about the change needed, the next step is likely dealing from that core. The Oilers have tried shuffling the supporting cast and it has not worked.

Which brings us to the question, if he is to deal one of his young guns, which one should it be?

The best player on the team and the most productive, Hall has gained superstar status and is one of the game’s top left wingers. He also plays with the fire and competitiveness that is sorely lacking on the majority of the team. Based on that there should be no way he’s dealt.

Of all players he would bring the most in return however and could set the Oilers up long term. He is injury prone and borders on a reckless style on some nights. He has yet to play a full, healthy NHL season.

Few players in the league are as slick with the puck as Eberle. Soft hands and great vision are his trademarks and he is the type of player anyone would love to play with.

He has already put up 30+ goals and is a low maintenance player that no doubt would give coaches little concern.

He is also the name most associated with being traded from this list. Many will suggest he is more expendable than Hall or Nugent-Hopkins and will bring more in return than Yakupov.

The argument can be made that Nugent-Hopkins is the most valuable to the Oilers than the other names on this list. With true No. 1 centres extremely rare, it would make little sense to deal an emerging one of your own. Combined with the fact that the Oilers need is at centre ice, the incentive to even consider moving him should not be there.

He leads all Oilers forwards in ice time and has been playing a well-rounded role for them and in all situations. He’s gotten bigger and stronger and the Oilers hope the numbers will follow.

Would be able to get the type of defenseman the Oilers really need, however with almost as many questions at centre as there are on defense, don’t expect RNH to be the one to go.

The player MacTavish is no doubt most willing to deal on this list, Yakupov has not put together the NHL resume the other three have. While he is as offensively talented as the others, he has not had the numbers or consistency that would warrant a big return.

He does however have an electrifying skill set, and one GM may think a change of scenery is the key to unlocking it. It wasn’t that long ago he was the No. 1 consensus NHL prospect and heralded as the next great Russian sniper.

MacTavish will have to see what offer would come back on him and whether the chances of him coming back to haunt the Oilers would be worth it.

This seems to be the line of thinking with MacTavish, at least at this point. He appears to want to make any other changes to his roster first before considering a move of one of the young core forwards. You can’t exactly blame him for wanted to keep all of his best assets.

If the season had started differently and the team was more successful with the additions he did make, he would be praised for not jumping the gun and pulling the trigger early.

Unfortunately that is not the reality we are in, and the Oilers are once again at the bottom of the standings.

Word from eastern teams: MacTavish is very eager to land a center. Source says "no one is off limits." Normal procedure to get talks going.

Even though he has publicly said that no players are off limits, MacTavish appears to want to take one more crack at changing the supporting cast first, whether it’s the right move or not, his moves will need to start paying dividends or everyone’s patience will run out.

I was one who did not necessarily disagree with MacT’s approaching in the offseason. In the past full year MacTavish has turned over half of the roster and brought in players in all positions.

As with most I did not expect the Oilers to be so bad so early yet again. The expectation was that the new additions would make the team more competitive on a nightly basis in order to see if it was a group that could grow and contend without dealing one of the core forwards.

Clearly that has not worked and a more significant play is needed.

Jordan Eberle is the player that is the best value to be traded. He is an elite level offensive player that can play in any team’s top six and powerplay.

That’s not to say he’s the player you want to trade, but the one that makes the most sense. 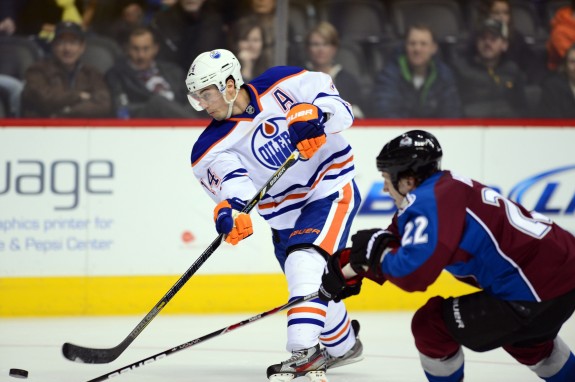 Hall and Nugent-Hopkins are not going anywhere as you won’t see the team’s only star in Hall being moved and trading their top centre in a position that is already a weakness makes no sense.

If Yakupov would bring the same interest as Eberle, than who wouldn’t love to keep Eberle instead? That is very unlikely to be the case however, as Yakupov has yet to even establish himself as a top six forward on a consistent basis.

Fans would no doubt be upset to see Eberle go as he’s a fan favourite in Oil Country and a Canadian hero for his World Juniors exploits. At this point however the need for change and improvement overrides all and those same fans want to see changes made.