The Detroit Red Wings have pulled off an incredible feat, qualifying for the playoffs for the 23rd consecutive season despite an incredible 396 man games lost. A lot of the credit can go to Mike Babcock, who deserves some serious consideration for the Jack Adams award. However, when it comes to Detroit, it’s more than just qualifying for the playoffs. During their incredible 22-now-23-season playoff run, the Wings have advanced to the 2nd round 15 times, the conference finals eight times, the Stanley Cup finals six times, and have won the Cup four times. The Wings don’t just want to get in to the playoffs; they want to do some serious damage. ESPN’s Craig Custance has already talked about how the Wings are the most dangerous wild-card team. However, if the Wings are to make a serious run in the 2014 Stanley Cup Playoffs, it will have to start as the 7th seed. With two games remaining for both Detroit and Columbus and Columbus owning the tiebreaker, the Wings will have to win out. 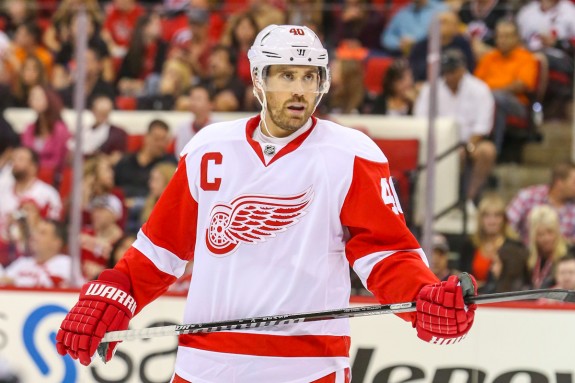 The New Playoff Format – Changes for 7th and 8th Seeds

With the new playoff format, there is no re-seeding like in years past. In previous years, if the 7th seed defeated the 2nd seed in the first round, the 7th seed would have to play the highest seed remaining in the 2nd round. However, in this year’s playoffs, that is not the case. Here’s how the standings look right now in the East:

As the standings are currently set up, the Wings would play the Boston Bruins in the first round. The 2nd and 3rd seed in each division will play each other and then play the winner of the 1st seed vs. the wild-card team. That means that the Red Wings 1st round matchup would be Boston, with a potential 2nd round matchup being against Tampa Bay or Montreal. For me, a route as the 7th seed that takes them through Pittsburgh is an easier route than Boston. 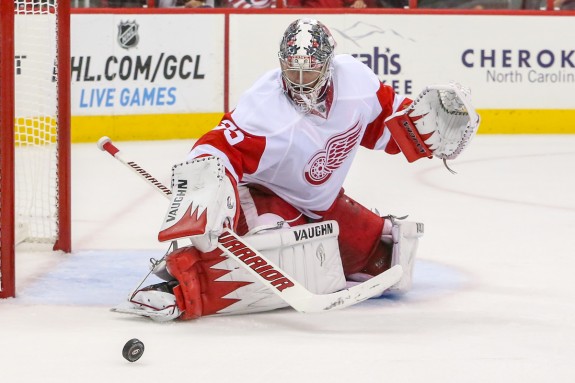 Jimmy Howard will be asked to stand on his head, regardless of the 1st round opponent – Photo Credit: Andy Martin Jr

The Wings are a combined 3-1 against the Bruins and  1-1-1 against the Penguins. So why am I advocating a route that goes through Pittsburgh? It’s based on the fact that the Wings have actually been more competitive in those games than in the games against Boston. I’ll illustrate the Fenwick percentages below as well as other factors that contribute to Pittsburgh being a more desirable first-round matchup.

It’s common knowledge that both Pittsburgh and Detroit have suffered an incredible amount of injuries this season. Pittsburgh and Detroit rank 1st and 2nd respectively in terms of man games lost this season (505 and 396). Pittsburgh is missing regulars Evgeni Malkin, Marcel Goc, Pascal Dupuis, and Joe Vitale. On top of that, they are missing backup goaltender Tomas Vokoun. While some of those names don’t seem significant, the loss of Malkin, Dupuis and Vokoun are the big names to focus on. Malkin is expected to return for the 1st round of the playoffs, but Dupuis and Vokoun are not certain to be back. If you look back to last season, Vokoun actually supplanted Marc-Andre Fleury as the starting goaltender in the playoffs and provided very solid goaltending. This year, the Penguins may not have that option. Other things to keep in mind are that Malkin will most likely be rusty, the Penguins top two defensemen, Paul Martin and Kris Letang, have just returned from injury and will take a few games to get back into game shape, and that the Penguins simply are not playing their most cohesive hockey right now.

This brings me to the Penguins possession numbers. When we look at team Fenwick, the Penguins have a Fenwick  For% of 50.1%, good for 15th in the NHL. The Red Wings on the other hand are at 51.0%, good for 11th in the NHL. In my analysis of the Stanley Cup playoffs, from 2007-2008 to 2011-2012, teams with a higher Fenwick% won 57.3% of playoff series. For comparison’s sake, the Bruins have a 54.3% FF%, good for 4th in the NHL. People have been apprehensive about using advanced statistics to predict games, but as I’ve just shown you, a higher FF% correlates to a higher winning percentage in a playoff series.

A matchup with Sidney Crosby might be a welcome sight for the 7th seed (Photo Credit: Andy Martin Jr)

If you are a head coach, which goaltender would you rather face?

If you haven’t been living under a rock for the last four years, you should clearly be able to tell that Goalie A is Marc-Andre Fleury and Goalie B is Tuukka Rask. What you can see from these numbers is that Rask is stealing games for the Bruins, but Fleury is losing games for the Penguins. Fleury faces nearly four fewer shots per game, has played five fewer games, but has given up 15 more goals. Rask’s save percentage is off the charts and his goals against average is a full goal less than Fleury’s. The Wings have had a lot of success against Rask this year as Rask is 1-3 against the Wings this year with a 3.29 GAA and a .871 SV%, his worst numbers against any team he saw multiple times this year. However, Rask has another gear that he saves for the playoffs  and I would not want to face him the playoffs. On the other side, Fleury seems to down-shift his game when the playoffs arrive, putting up absolutely horrific numbers. With the Penguins potentially not having Vokoun as a safety net, Fleury has even more pressure on his shoulders. I think the Wings will have a greater chance of success against Fleury than Rask.

Boston has scored 251 goals this season compared to Pittsburgh’s 237. However, it’s not the absolute difference I want you to focus on; rather it’s where those goals are coming from. The Bruins have eight guys with at least 15 goals and if defenseman Torey Krug can find the back of the net once in one of Boston’s remaining games, that number goes to nine players. Pittsburgh on the other hand has five players with 15 or more goals and a majority of their offense comes from Sidney Crosby (he’s factored in on 43.5% of Pittsburgh’s goals this season). It’s much easier to slow down a team if the scoring is concentrated on one or two lines, especially because center Luke Glendening and his linemates have proven themselves to be effective against Crosby this season. In the last two games against the Penguins, at 5-on-5 Glendening has a 53.7% CF% which far exceeds his season average of 46.2%. In the previous game at Joe Louis Arena where Glendening and Crosby matched up for nearly the entire game, Glendening had a CF% of 64.7% compared to Crosby’s 50.0% and Crosby played just two shifts where Glendening was not on the ice for part of it per ShiftChart. In this most recent game, the Penguins were able to get Crosby away from Glendening starting in the 2nd period and that’s when Pittsburgh’s offense opened up. If the Wings can continue to match Glendening’s line against Crosby’s in the playoffs, the Wings might be able to shut down a large percentage of the Penguins’ offense.

To summarize for you, I believe that the 7th seed provides the best chance of playoff succes for Detroit. A first round matchup against Boston is not ideal due to Boston dominating the flow of play during the four matchups this season, the ability of Rask to take over, and the depth of scoring that Boston possesses. A route through Pittsburgh offers the Wings the opportunity to play a team that is equally wounded, has a goaltender with almost no confidence in the playoffs, and a team that has struggled to control the play in head-to-head matchups.