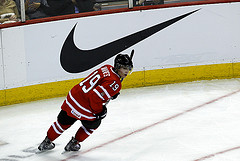 One-Timer: Already a legend,  J.T. has broken the all-time OHL goal-scoring record this season.  Possessing elite hands, hockey sense and on-ice vision, as well as an innate pure goal-scorers touch,  J.T. seems destined to be an NHL superstar.  Skating is about the only possible issue scouts can identify,  but even that is far from a liability.  J.T.’s other skills and unbelievable Hockey IQ,  more than make up for whatever current skating deficiencies he might have.