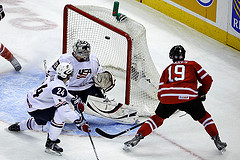 After returning from the beautiful Mayan Riviera and having evaded the notorious swine flu, even with the exciting and classic playoff races taking place, why am I not surprised to see Brian Burke’s mug stealing media limelight.

CBC Sports is reporting the Leafs may actually have a legitimate shot at landing the coveted elite forward prospect – John Tavares. I had touched on the subject of Burke relentlessly pursuing the rights to obtain Tavares in a previous article, Shots From The Slot.

If you have been living in a secluded bunker of some sort hiding from pending pandemics and have no idea who Tavares is, read this bio written by fellow THW columnist, Mike DiFranco. You can also get up-to-date Tavares stats along with a brief description of what he brings to the table and NHL player comparisions by checking out my latest mock draft on my blog (he is ranked #1 overall currently).

On Hockey Night in Canada this past Saturday Night, Pierre Lebrun stated:

“In the last couple of weeks there have been rumblings coming out of Long Island … and suddenly it’s not a sure bet, according to these rumblings, that [GM] Garth Snow will take John Tavares as we’ve been led to believe all along.” If that were to happen, he continued, “I’m told the Lightning would immediately go to Toronto’s table and say ‘Alright, Brian, we’re open for business. We want [veteran defenceman Tomas] Kaberle and Luke Schenn.”

T.O. Sports magazine recently published a top ten list of why Tavares should be a Leaf.

Let’s then take a look at several scenarios, if all the dominoes stack up as Burke hopes, in which Tavares might fall in to the Leaf’s lap:

Burke, who states that no player who is property of the Leafs is untouchable, including backbone blueliner Luke Schenn, stated:

“No player is untradeable,” he said. “Wayne Gretzky got traded.”

This is quite ironic coming from same bold guy who made the following statement earlier in his career about a decade ago:

“I don’t care if we lose every game for the next five years and the team goes broke and moves to Moose Jaw, I will not trade Pavel Bure!”

Then Canucks GM Brian Burke, several weeks before trading Pavel Bure to the Panthers in the late nineties.

In the words of O-Bomber (Barrick Obama), “Let me make this perfectly clear,” – I am not stating the Leafs will end up with Tavares, but simply stating potential happenings that may lead to that transaction taking place.

Please post your comments or fabricated scenarios below on whether or not you think the Leafs have a true shot at landing the Next, Next One.