The following is a list of 5 popular delay tactics after a team ices the puck. Icing places a face-off inside the defensive zone of a team that is usually reeling and has a tired group of players on the ice. Icing is explained by Rule 81 in the official NHL rule book. If you care to have a better understanding of the icing rule, please watch the video below.

It is Rule 81.4 that’s caused every player in the NHL to find creative ways to buy time before lining up for a face-off since they aren’t afforded a line change after their team ices the puck.  Since this rule came into existence, players and teams have continually become craftier in an attempt to gain one more second of rest before the puck is set to drop. Here are five tactical ways to kill time after a team ices the puck. 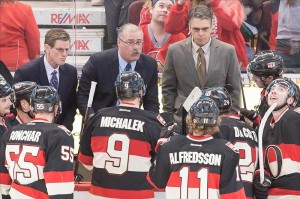 Since the 81.4 icing rule was put in place, coaches haven’t been shy about using their timeout early in a game. (Marc DesRosiers-USA TODAY Sports)

This is the most proper way for a team to buy time after icing has been called. While a timeout does not allow a team to make a line change, the players on the ice can rest and be full of wind after some Gatorade and water at the bench. A coach like Dan Bylsma has never been afraid to use up his timeout after an icing in the first period.

As both teams gather around one of the defensive face-off circles to resume play after an icing,
goaltenders have found plenty of ways to delay the puck from dropping in a timely manner. Many goalies are a one flick away from loosening a strap on one of their leg pads and asking a linesman to tighten it up. Goalies have so many pieces of equipment. There are plenty of strings or straps for a goaltender to pull on to attract some attention from the referees before the puck is supposed to drop.

Goaltenders will do whatever it takes to buy extra time after their team is guilty of an icing call. (Tim Fuller-USA TODAY Sports)

Whether a player’s hockey stick is cracked or a fresh twig was taken off of the bench a shift prior, I’ve seen a variety of $250 hockey sticks snapped in half after an icing call. In a matter of seconds, any NHL player can put all of their weight on their stick and break it. This gives everyone on the ice more time to rest while the player who broke his stick goes to retrieve a new one from the bench.

The rule is widely known throughout the league that a player who is on the ice when his team ices the puck cannot make a line change. This doesn’t stop anyone from trying. Many times when the puck is on its way for an icing, players will attempt to change. Fresh players will then come on the ice and pretend to head for the defensive zone face-off. The linesmen will count and work to get the five players back on the ice who were guilty of the icing. All of this confusion and disorder gives the tired players time to rest. The guilty players will sit on the bench and rest until the linesmen call them back onto the ice. 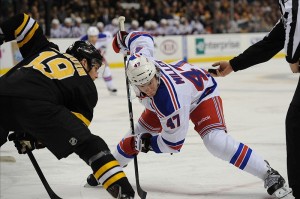 The Boston Bruins were one of many playoff teams that had a winger get kicked out of a face-off circle on purpose after an icing infraction. (Bob DeChiara-USA TODAY Sports)

When a team lines up for a face-off after an icing, often times they will have a winger line up to take the draw instead of the center who is on the ice. This is scripted for the winger to cheat and get kicked out of the face-off circle by the linesman. This is done on purpose so every player can have a little extra time to catch some wind. Then the center will step in for the winger who was just kicked out of the face-off circle. The winger never intended for the puck to be dropped. This is one of the most popular maneuvers to gain more time before play is resumed.

While these delay tactics are quite amusing, the NHL will never be able to stop players and teams from trying to bend the 81.4 rule after an icing has been called. Team and players will continue to develop new ways to gain rest after an icing is called.