The playoffs are under a month away, and the Canucks are already getting into postseason form. They are only holding down a playoff spot by three points, and will have to battle hard to maintain their position in the standings.

They will likely be fighting for their playoff lives right up until the end of the season, which is unfamiliar territory in Vancouver. In their past five playoff appearances, the Canucks began their postseason as the top seed in the defunct Northwest division.

Here are five potential playoff matchups for the Canucks, ranked from most favourable to least favourable. 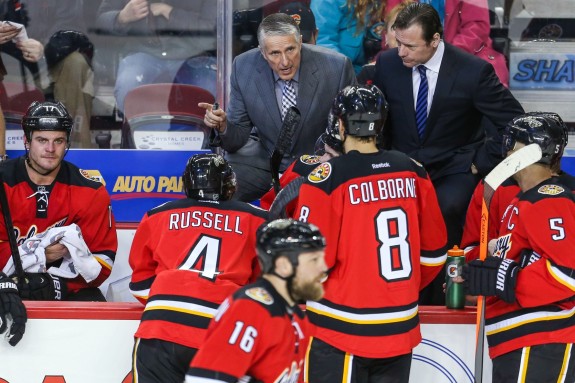 Bob Hartley and the Calgary Flames are right in the thick of the playoff race. (Sergei Belski-USA TODAY Sports)

The Calgary Flames continue to baffle the NHL by hanging around in the playoff race. The Flames are continuing to get it done, even without the services of their captain, Mark Giordano. They are 5-2-1 since Giordano was lost for the season after suffering a torn bicep tendon.

This series represents the most even matchup for the Canucks, and choosing a winner between the two teams would likely come down to a coin flip. Although both teams were near the basement of the Conference last season, they would put on a hell of a show if they met in the first round.

They haven’t met in the playoffs since 2004, in a series where Matt Cooke tied it up in game seven with under ten seconds to go. The Canucks lost the series in overtime after a goal by Martin Gelinas.

Another surprising team this season, the Predators are currently tied for the division lead with the St. Louis Blues. If the Canucks were to face the Predators in the playoffs next month, they would take on the role as the underdog. Definitely a different scenario from the last time these two met in the playoffs.

Unfortunately, Ryan Kesler won’t be around to recreate his dominance against Nashville. The Canucks also haven’t beat Nashville this season, and they have lost by a combined score of 8-2. Although Nashville is struggling right now with two wins in their last ten, they are still a dangerous team to face in the first round. Nashville would hold home-ice advantage in this series, and the Canucks would have to face them and their league-best home record. 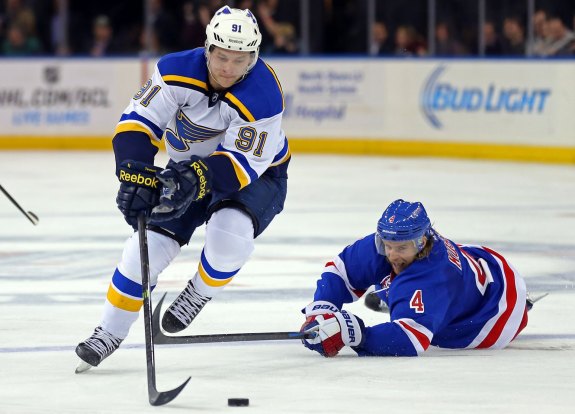 Vladimir Tarasenko has elevated his game with St. Louis this season, and his team leads the Central division. (Adam Hunger-USA TODAY Sports)

With Nashville and St. Louis going in opposite directions in the Central division, the Canucks would be more likely to face the Blues if they slip into a wild card position. On the surface, the Canucks might be better off playing St. Louis, since they are the only team on this list that the Canucks have a winning record against.

St. Louis has under-performed in the playoffs during their last few appearances, so they should be heavily motivated entering the post-season. They are a dangerous team on both sides of the puck, with the fifth-best goals per game average in the league, along with the seventh-best goals against average. They are also a heavy team that would likely outmatch the Canucks physically over a seven game series.

The Canucks have kept it close in four of their five games versus the Ducks this season. However, this is far from a favourable matchup for Vancouver.

In their last two games against the Ducks, the Canucks were outshot and outplayed. They lost 4-0 to Anaheim back in January, in a game where they never really showed up. They actually won their last matchup against Anaheim 2-1, despite being outshot 30-16. 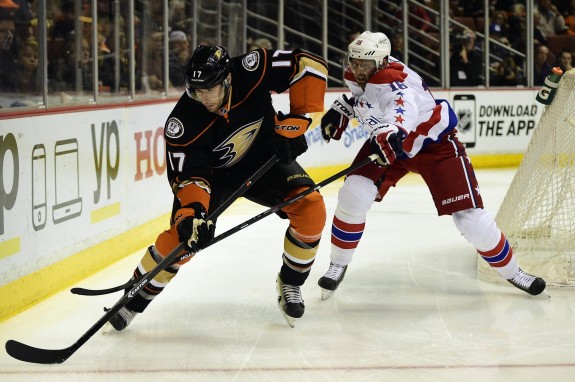 It would be an interesting story to see Ryan Kesler face his old team in the first round. (Kelvin Kuo-USA TODAY Sports)

The only factor working in the Canucks favour, is that they will be playing meaningful games until the end of the regular season to hold down their playoff position. With the Ducks comfortably in a playoff spot, they might not have the same intensity come playoff time. If this matchup coalesces, the Canucks will be praying for the President Trophy curse to strike the Ducks, who currently lead the NHL in points.

In terms of sexy playoff matchups, Ryan Kesler versus his old team would be quite intriguing.

The Canucks haven’t beaten Los Angeles all season, and their chances don’t look good in a first round matchup against the Kings. (Jayne Kamin-Oncea-USA TODAY Sports)

If there is one team the Canucks don’t want to face, it’s their foes from the Pacific.

Everyone around the league knows that the Kings ramp up their intensity come playoff time, and so far they have dominated the Canucks this season. In the three games they have played against each other so far, the Kings have won all three by a combined score of 11-2. Including last year’s record against the Kings, the Canucks have 1-6-1 record in their last eight games versus Los Angeles.

With two more games against the Kings left in the Canucks schedule, Los Angeles could potentially be the Canucks biggest threat to a postseason birth. Unless the Canucks play better hockey against Los Angeles, a first round matchup against them would be their quickest ticket to the golf course.