Stafford Smythe, President of the Toronto Maple Leafs, said yesterday that the City of Vancouver has missed its chance to join the NHL for “a whole generation.”

Smythe was commenting on a plebicite held as part of the civic elections in which the city’s ratepayers rejected a by-law which would have gifted a $2,000000 piece of prime downtown real estate to Smythe in order that he could build a 18,000 seat NHL-quality arena.

Smythe says the vote brings about a complete end to the project.  He had placed a December 21 deadline on approval of the deal, which he hinted, could have resulted in the NHL expanding and placing a franchise in Vancouver.

The vote, which was limited to taxpayers in Vancouver only, and not all eligible voters, was rejected by  34,844 to 27,205.  Yet in the general election, Mayor William Rathie was returned, although his campaign was based largely on the viability and his support of the arena project. 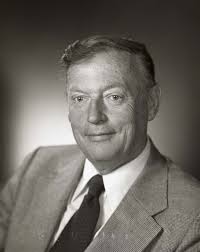 Many observers feel that the rejection had more to do with the fact that Stafford Smythe was the person behind the project, rather than the actual construction of a big-league facility.  Jack Dulmage of the Windsor Star postulated that  hotel owners in the downtown area of Vancouver led the charge against Smythe.  With no restrictions on what, other than the new rink, could be built on the site, they were afraid the Maple Leaf president would construct a shiny new hotel to pose direct competition to those accommodations already established.

One thing is for certain – without Smythe’s considerable support, Vancouver’s road in to the NHL, if there is a road at all, just became a lot more tenuous.

In the only NHL game played last night the Boston Bruins were no match for the Chicago Black Hawks at the Boston Garden.  Phil Esposito scored two goals, while Bobby Hull added his 21st goal in 23 games in a 5-1 Chicago drubbing of the Beantowners.  Red Hay and Ken Wharram rounded out the Hawks’ scoring list.  For Hay, it was his first goal in 17 games.

Murray Oliver, whose errant pass led to Hay’s goal, was the only Bruin to beat Chicago netminder Denis DeJordy.

Only 8,719 were on hand to see the Hawks thoroughly dominate the home side.  Part of that domination was due to the fact that Chicago coach Billy Reay played Hull for about 40 minutes.  Reay quipped after the game,

A beleaguered Ed Johnston made 27 saves in goal for Boston, while DeJordy got in the way of 25 Boston drives.

Bill Hicke, recently demoted from the Montreal Canadiens to the Cleveland Barons of the American Hockey League, paced the Barons to a 4-1 win over the Quebec Aces last night in Quebec City.

Hicke score two goals and added an assist for the Barons, still in last place in the Western Division.  Frank Martin and Bob Ellett also scored for Cleveland.  Ed Hoekstra was the lone Quebec marksman. 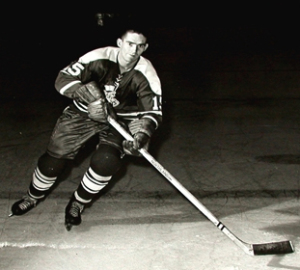 The Toronto Marlboros dug themselves a gigantic hole against the Peterborough Petes last night, and even a frantic four-goal final frame rally wasn’t enough to save the day.  The Petes had built a 6-0 lead on  Toronto over the first two periods before the Marlies came to life in the third.

Leo Thiffault led the way for the Petes with 2 goals,  and Danny Grant, Andre Lacroix, Jim Paterson and Dale Watson netted singles.  The Marlies stormed back in the third on goals by Brit Selby, Jerry Meehan, Jack Chipchase and Wayne Carleton.

Punch Imlach, the irascible manager-coach of the Toronto Maple Leafs, is unhappy with the play of his Stanley Cup defending champions this season, and unless things improve, changes are in the offing.  Only the approach of Christmas is saving several of his charges from being sent to the minors in favour of younger blood.

“These guys are family men and Christmas is coming.  I’d be a pretty heartless guy if I sent one or two of them to our farm team at Rochester or Victoria, B.C., or even Tulsa.  Yet I’m beginning to think that’s where some of them belong.”

“I’ve said from the start I would go with the men who won the Stanley Cup for Toronto last spring.  But I can’t wait much longer for them to deliver.”

A possible replacement for anyone farmed out would be young Marlboro grad Peter Stemkowski, presently working with Rochester of the AHL.  Imlach is heading to Quebec City on Tuesday to get a first-hand look at the  impressive youngster. Some Rochester folks are saying that Stemkowski is the best player to ever suit up for the Americans in their nine-year history.  So far this season he has scored 10 goals and added 13 assists, good enough for ninth place in AHL scoring.  He has been particularly hot over the past five games, netting six goals and five assists.

While it appears that Stemkowski could definitely help Toronto, Imlach would not likely bring him on board unless he could provide him with steady work. Given the depth on the Leaf roster, that would mean someone would have to be shipped out, either via demotion or trade.

Howell under the weather

The New York Rangers said today that star defenceman Harry Howell has come down with influenza and is a doubtful starter for Saturday’s NHL game in Montreal.  No replacement has been announced.