In today’s News and Observer, local writer Luke DeCock wrote about the need for the Carolina Hurricanes organization to essentially trade off anyone and anything that isn’t nailed down in an effort to compete in the McDavid sweepstakes. He wrote about how the season is a lost cause and the time and effort would be better spent looking toward the future. In that regard, Mr. DeCock is correct.

However, the thought of a “firesale” of Carolina players to garner as many young prospects and/or picks as possible should remain a fleeting fancy. For that matter, so should the thought of seeing McDavid in a Carolina uniform. The season is a lost one, for sure. Outside of a five-game winning streak to begin November, Carolina is 3-16-3 this year. But it’s a story that Canes fans have seen before, and they know how it ends.

First, the McDavid sweepstakes just isn’t in the cards for Carolina. Yes, they’re tied for the worst team in the league at the moment. Only the Edmonton Oilers have come close to the futility of Carolina’s season, and it took them an 11-game losing streak to achieve that. But there’s little reason to believe that the Hurricanes will remain this bad.

First and foremost, Jordan Staal will be returning to the lineup soon. He’s not going to give the team some miraculous boost to suddenly turn them into a playoff contender, but he will provide enough of an offensive and defensive improvement to leapfrog a couple teams in the standings. In Bill Peters’ possession system especially, Jordan Staal will thrive.

Second, as the year winds down, more and more teams will begin to start their backup goaltenders against Carolina. While the Hurricanes do not have the best record against backup goaltending, they will likely earn more wins against those backups than they will against the starters, especially in the Metropolitan division.

Finally, the schedule favors Carolina down the stretch. Of the 15 games in March, 11 of them are at home. If the Canes were a playoff team, March would have been a godsend for the organization. Instead, that home cooking will likely provide the Hurricanes just enough wins to put them out of lottery range and into the typical 5-7 spot. Not a terrible location to be, but not McDavid/Eichel territory.

As far as trading off all the assets and looking toward the future, Carolina will have trouble doing that as well. The Canes players basically separate into three groups:

The first group is the “core group” of players that former general manager Jim Rutherford spent so many years building. Eric Staal, Jordan Staal, Cam Ward, and (despite his recent struggles) Alex Semin are all talented players that could be valuable pieces should the Canes decide to trade them. Unfortunately for the Hurricanes organization, their respective contracts keep them anchored in Carolina. The Staal brothers and Ward have no-trade clauses in their contracts, meaning that if they want to stay in Carolina, there’s very little Ron Francis can do about it. Not that he would ask them to waive those clauses in the first place.

“You get a big centerman, those are the guys everybody’s trying to covet,” Francis said about the trade rumors. “So we’re not looking to move a guy like that.”

Alex Semin is a different issue. It’s not hard to imagine that the organization is unhappy with his play this year, and the friction between Semin and Peters has been palpable at points in this early season. Unfortunately, with only 1 goal and a $7 million contract for the next couple years, there likely won’t be many takers for the winger if the Canes put him on the trading block. The best the Hurricanes can hope for is that he bounces back next year or sneaks off to the KHL in the offseason.

The second group makes up the vast majority of the remaining roster, and that’s probably the biggest issue in Carolina. Too many players that have been cast out elsewhere find a home here, and the moderate success they find is often enough to receive a contract they probably shouldn’t have. Tim Gleason, John-Michael Liles, Nathan Gerbe, Jay Harrison, Riley Nash, Brad Malone, Jay McClement and Patrick Dwyer could all technically be moved with little issue, but the return for each player will likely be minimal. Maybe the Hurricanes could grab up enough 4th or 5th round picks to find a diamond in the rough. 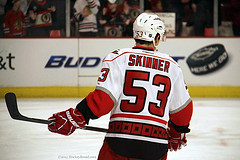 Jeff Skinner should be a part of Carolina’s future. (Cheryl Adams / HockeyBroad.com)

The final group is part of the “light at the end of the tunnel” that DeCock and many Canes fans are hoping is better than the current situation. Jeff Skinner, Justin Faulk, Elias Lindholm, and some prospects like Hayden Fleury and Alex Nedeljkovic are all young enough to build around successfully. They’re also the most valuable pieces the Hurricanes have, should the organization really make a push for the McDavid sweepstakes.

Between a Rock and a Hard Place

It’s nice to fantasize that the Hurricanes make a miraculous turnaround on the season. They’ll win 40 out of the remaining 55 games and surprise everyone by not only making the playoffs, but putting forth a deep Cup run. Improbable, and as close to impossible as one can get, but fantasies help fans deal with poor seasons. Likewise, the thought that Carolina trades off their assets, wins the lottery and grabs McDavid, Eichel or Hanifin to start a new era of Canes hockey is another such fantasy. One with a bit more basis in reality, but a fantasy nonetheless.

The Hurricanes are stuck with what they have, at least for another year. Like rearranging the chairs on the Titanic, the depth players may change, but the core will likely remain, and barring some surprising developments in the offseason, the Hurricanes will be in the same position next year, debating whether to take Auston Matthews or Jakob Chychrun with their hypothetical 1st overall pick.