1. Nathan Mackinnon – Halifax QMJHL, Forward. A special player who is having a great rookie season in the Quebec League. Played for Shattuck St.Marys last year and is following in fellow Nova Scotia native Sidney Crosby’s footsteps.

2. Seth Jones – US Under 18 USHL. Defense. Big mobile defenseman who would of made the US world junior team this

year if it was not for an injury sustained in the pre tournament camp. Son of former NBA player Popeye Jones.

3. Alexsander Barkov – Tappara Finland, Forward. Already playing full time in the Finnish Top Division. This prospect has come out of nowhere this season. Was the youngest player to ever suit up for Finland at this year’s World Juniors.

4. Sean Monahan – Ottawa OHL, Forward. A late 94 birth year who is starting to slow down after great start to the season. Still has an outside shot at challenging for a top 3 spot if he can put up big numbers next year.

5. Hunter Shinkaruk – Medicine Hat WHL, Forward. Another late 94 birth year who already has 40 goals this year in the Western League. Next season will be a big challenge as he will lose line mate Emerson Etem, who has helped him greatly this year.

1. Sam Reinhart – Kootenay WHL, Forward. Averaging a point a game as a rookie in the WHL. Already over 6 feet tall and still growing. Still has two more years of junior and could have number 1 spot locked down for the long run. 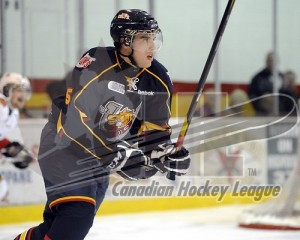 2. Aaron Ekblad – Barrie OHL, Defense. Granted exceptional status and has not disappointed in his OHL rookie season. Really shows confidence with the puck and being given lots of ice time to show what he can do. Will be a leader in Barrie for the next two years.

3. Josh Ho-Sang – Toronto Minor Midget, Forward. Some scouts consider him the best prospect out of Greater Toronto since Stamkos. Can electrify an arena with one rush of the puck. His speed and puck skills are phenomenal. Everyone interested to see how he adapts to Major Junior next year.

4. Jake Virtanen – Fraser Valley (BC) Midget, Forward. The number 1 pick in the WHL draft last summer. A big scoring forward who can rack up the penalty minutes as well.  Look for Jake to have a big year next season for the Calgary Hitmen.

5. Nick Ritchie – Peterborough OHL, Forward. A late 95 birth year who is having a decent rookie season in the OHL. Your typical power forward that will get every opportunity to exceed over next two years for the Petes.