With three preseason games under their belt, an image of a new, re-shaped Tampa Bay Lightning has finally begun to form. No longer will analysis have to consist of speculations made from educated guess and theoretical predictions. Now, there’s room for keen, accurate observations which will unravel themselves over the course of the preseason and manifest itself as a concrete ideal of a re-born team over the following eighty-two games. And, from what we have seen so far from this small glimpse of Yzerman’s monster, the Lightning find themselves on track to becoming the dominate force in their division and, with a fierce certainty, one of the best franchises in the NHL.

I know that most of this rambling may be either pure hyperbole or naive exaggeration – both being common problems when writing about team’s you feel partial to – but, even if these are just mere fabrications of an over-excited, Hockey-deprived mind, they’re certainly statements made not entirely off-base. Last year, the Lightning, suffering from a somewhat weak defense, occasionally slipped into that monotonous kind of play. During certain points in some games, as the lull of constant motion went on as it always does when the clock winds down, they seemed more inert than perpetual. A tad too many goals were scored and a few too many games were lost as a result.

However, what the Lightning lacked in reliable, consistent defense, they made up in competent offense. Perhaps the biggest revelation last year for Tampa Bay came in the form of second-hand scoring. In the absence of their Goal-Scoring-King Stamkos, the Bolts’ forwards were forced to drastically improve their game. The end-result, as we all know, was two Calder nominations for Tyler Johnson and Ondrej Palat as well as the quickened development of a young team. Now, as we turn our attention to this year’s addition of rookies, those currently playing their heart outs in an attempt to obtain a roster spot for the upcoming season, we must realize that last year’s success was no mere fluke. Instead, it was the beginning of a new era.

…In the Second Year of the Rookie

Many Bolt prospects, long-awaited as well as thoroughly developed, are expected to take their first steps at the NHL level this year. Among these players are Brett Connolly, Vladislav Namestnikov, and, of course, Jonathan Drouin. All three are first round picks – Connolly and Drouin being top 10 picks. Until now, Lightning management has kept them in the juniors in order to develop into well-rounded players, whereas most other teams would have brought them up a year or two ago.

Connolly will be the most interesting to watch this year. A 6th overall pick in 2010, expectations were automatically high. And, as often the case with many Bolt prospects, Connolly seemed to fail to live up to expectations. But, while tempted to dwell on the word ‘fail,’ we must focus on the idea of ‘seem’ – for we may make the foolish mistake of drawing conclusions too early and ruling out a highly skilled skater before his time has even come. Connolly’s journey has been one of speed bumps, obstacles thrown before him without warning, slowing down his development and journey enough to make him look like a hopeless cause. But, through sheer determination and well-deserved patience from Yzerman’s end, it looks like Connolly’s time has come at last.

Whether or not Connolly will be successful this season in the NHL will really depend upon the chemistry he develops with other skaters. There’s a possibility that he’ll end up on the third or fourth line with players like Namestikov and Kucherov. At the same time, there’s also chance (and hopes) that Connolly will be contending for a top six position. In the end, I think it’ll come down to a battle between Connolly and Kucherov when considering that final top six position. Putting him on a line with recently signed veteran Brenden Morrow would also be a fascinating and potentially lethal combination – when it comes to the Lightning, the veteran and prospect combination can often be a game changer.

While he’s going to be the biggest rookie presence for the Bolts this year (perhaps even the NHL), I’m not going to talk much about Drouin simply because everyone else has written about him. He’ll be in the spotlight in the coming months, so his talent and skill and accomplishments will speak for themselves. It’s Namestnikov, that Russian forward with visceral skill and hockey sense, who will be the Lightning’s surprise star. While he harnesses an arsenal of talent, he probably won’t turn out to be the shocking revelation that was Ondrej Palat, but there’s no doubt that he will not go unnoticed this season.

A 27th overall pick, Namestnikov has the potential to be a game-changer. While not an elite forward, there’s the likelihood that he will one day develop, into a consistent contributor like Valterri Filpulla or Ryan Callahan. Though he’s from Russia, Namestnikov plays a North American-style game, implying that he plays a gritty form of offense rather than clean, puck dancing, as many Russians display when on the ice. However, despite being on the small side, Namestikov also plays with high energy, showing an aggressiveness on the fore-check, which can cause many problems for opposing defenders in the neutral zone. Because of his style of play, Namestnikov will likely make a surprising impact this year when on the ice.

The Question of the Sophomore Slump

And, of course, with every successful rookie-campaign their comes the added pressure of having to follow up with even more success. While players like Palat and Johnson will probably improve their game even more this year – most likely because these two skaters seemed not only to possess the ability to improve under pressure but actually seemed to thrive because of it – there’s also the question of other skaters making their way back into the league this year.

Last year, the Lightning saw sixteen rookies play on their roster, more than any other team in the NHL. Besides Palat and Johnson, Nikita Kucherov, J.T. Brown, Radko Gudas, and Richard Panik. Gudas’ will most likely improve his defensive game with the addition of Jason Garrison and Anton Stralman (though most of Stralman’s play will be shared with fellow Swede Victor Hedman).The most attention will probably be put upon Nikita Kucherov and J.T. Brown. Both are players with incredible speed, albeit different manifestation of it in their play. For example, Brown excels on the breakaway. While he shows little proof of puck-handling skills (meaning that he’s not a dazzler but a simple player), Brown’s greatest trait can be found in his vision. Take this set-up to Stamkos as an example:

Brown fiercely forces himself into the right position, the perfect spot to feed Stamkos the puck, allowing Stammer to do his thing. While Brown won’t develop into a primary goal-scorer any time soon, he’ll definitely find himself in those tight spots more often than not. He’s the one who will notch the assist during close game, not getting his name into the goal-column but still playing a large factor in the ultimate outcome of a game.

Nikita Kucherov, a whole different style of player, I believe, will turn out to be the surprise breakout star for this year. Some believe it to be Connolly, and it may just be him – though that mostly depends on whether or not he’ll be playing on a line with Jonathan Marchessault – but, from watching Kucherov play last year, I’m expecting the tiny Russian to tear up the ice this year. He plays with a fierce speed that’s at time both shocking and dazzling, proving to have both excellent puck-handling skills as well as a mature composure when facing daunting veterans.

Kucherov’s skill is top-6 worthy, I believe. He also may be the most underrated forward on the Tampa Bay Lightning. For a player who scored his first NHL goal on his first shot, Kucherov’s reputation has been a silent one. This lack of attention probably stems from a lack of impressive statistics, though that may change soon enough. He’s played on a line with Namestikov and Marchessault this preseason, a line which debuted with fierce results in the first game against the Nashville Predators. But, Kucherov’s loaded with talent. And, if you seem skeptical at first, just consider his speed, puck-handling, and offensive vision, and take a look for yourself: 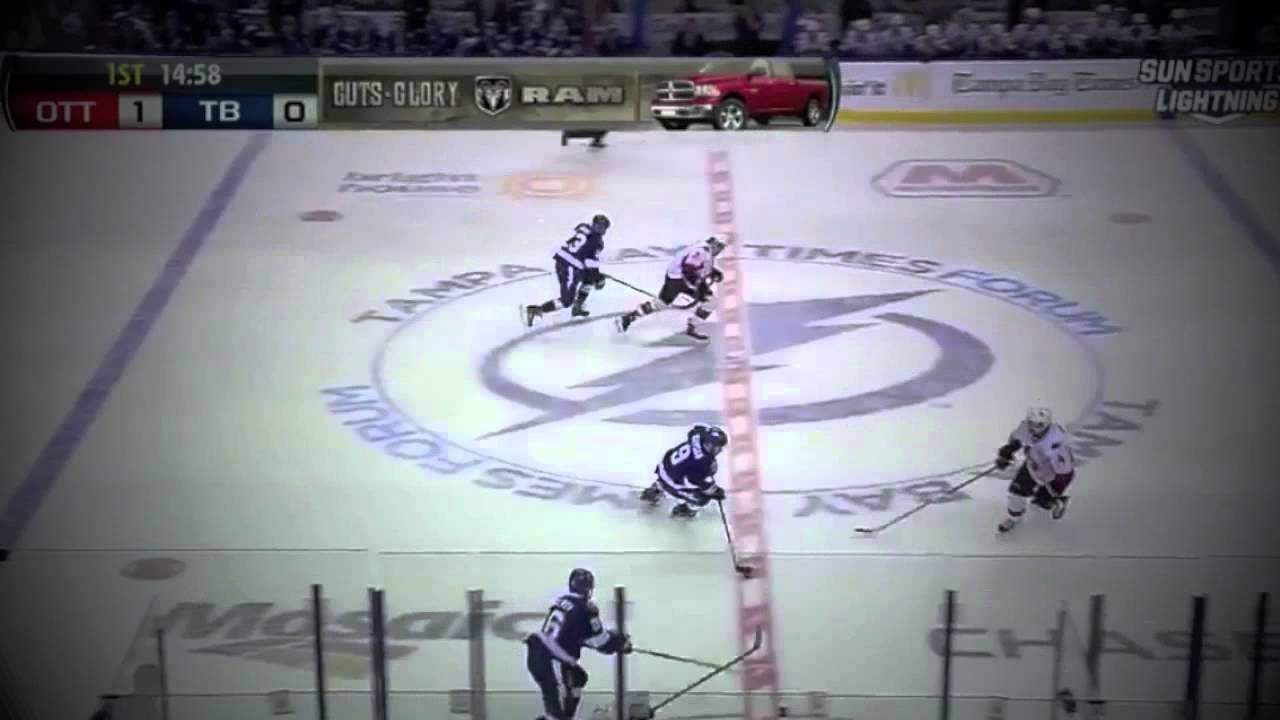 Living Up to Expectations

Hockey is a game of context: a sport which must allow its structure and form to develop according to the different demands of each game. In Hockey, playing the same way night in and night out will only lead to lost games. Opposing goaltenders will know where to anticipate shots just as defenders instinctively place themselves into predictable offensive zones. The Lightning seemed to observe their mistakes from last year, recognize problems while realizing the solutions. The necessary steps that were needed to fix these weaknesses were taken, mostly in the form of acquisitions through both trades and free agency.

This summer, Tampa Bay GM Steve Yzerman went crazy on a Sunday night, dumping three players some could say provided little to the newly shaped Tampa Bay team. Later that week, he filled those gaping holes with the addition of three veterans: Brian Boyle, Anton Stralman, and Evgeni Nabokov. The presence of well-developed veteran players (with plenty of playoff experience) will provide a level of certainty that can potentially stabilize a relatively (and increasingly) young Tampa Bay team.

Expectations are high for the Tampa Bay Lightning. Rookies often cave under fierce pressure. Thanks to these new veterans as well as a slightly more skilled and confident sophomore class, the rookies finally stepping into the big picture will be able to breathe easy when time get tough. The Lightning will be a different team from even the one we saw at the end of last season, caving under the Canadiens during the playoffs, sent packing for the summer while gasping for air. But, as they re-emerge from the off-season, the Tampa Bay Lightning will make it known that they intend to contend for the cup – not just now, but for years. to come.

I, William Gilbert, am from Bradenton, Florida and currently attend Florida State University. My major is Creative Writing but I spend most my time watching hockey and obsessing over Ben Bishop.