No more Ray Shero and his masterful trades, or his inability to draft anyone other than defensemen. 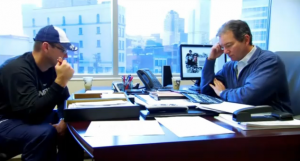 No more Dan Bylsma and his wide open style of play that lead to tremendous regular season results, but ended with bitter postseason flame-outs.

In as Shero’s replacement is the man whom Shero took almost-criminal advantage of during the 2012 draft that saw Jordan Staal shipped off to the Carolina Hurricanes in exchange for Brandon Sutter, Brian Dumoulin, and the ‘Canes’ first round draft pick that turned in to Derrick Pouliot:

Are you excited? Me neither.

Alas, the curtain has all but officially risen on the 2014-2015 version of the clean-slate, fresh-start Pittsburgh Penguins. Forgotten will be the lack of forward depth to which Shero contributed. Gone is Bylsma’s ego and inability to adapt in the playoffs and adjust his system.

In are new faces, presumably a new system, and a new attitude that should serve these Penguins well (also a new alternate jersey that harkens back to the glory days of the Cup years of ’91 and ’92; of which I am a fan).

I don’t want to beat the proverbial “out with the old, in with the new” already-dead horse any further. So let’s have a look-see at what we can reasonably expect from this incarnation of the Pittsburgh Penguins.

The Pens did not take many strides to become a more gifted team in terms of scoring. I can assure you however, that they will be a much more difficult team to play this season with the additions of Nick Spaling and Steve Downie.

If Daniel Carcillo; in camp on a professional tryout, makes the team, yikes.

James Neal is now in Nashville, and in return is the aforementioned Spaling, and Patric Hornqvist. Hornqvist likely figures to replace Neal on Malkin’s right wing, but at the moment that is the farthest thing from a guarantee.

The bottom six forward group is markedly better with the additions of Spaling, Downie, Blake Comeau, and Rutherford’s ability to retain Marcel Goc.

The biggest question mark of all the forwards will be former first-round pick Beau Bennett; specifically his health. He has dealt with bad wrists since his days at Denver University. Last season he only saw 21 games of action due to a third wrist surgery. I said at the beginning of last season that I felt he would have a breakout year playing on Malkin’s left wing. I still feel that Bennett is best suited to play alongside Malkin. Their respective skill sets compliment each other nicely in my opinion.

This is the group that should be better, if for no other reason than there are just so many options on a given night.

For what its worth, watching Rob Scuderi in last night’s first preseason game against Detroit has led me to the conclusion that he should not play one minute of meaningful action this season. If he does (and he will), he should never skate past his own blue line. He has clearly lost the one and only step he ever had, as he was never accused of being fleet afoot to begin with. If he appeared to be skating in quicksand last season, then he was trying to skate in solidified concrete last night. This is a situation where a guy is hanging on when he needs to hang it up. Ray Shero did this organization no favors by signing Scuderi to a four-year contract at the beginning of last summer.

That said, there are more than enough young guys capable of coming up and taking Scuderi’s roster spot; most of whom should see action in tonight’s tilt in Columbus.

Those names include Brian Dumoulin, Scott Harrington, Derrick Pouliot (when healthy), and potentially Philip Samuelsson and Harrison Ruopp. Ruopp, according to a few in the Pens organization, could be the next Brooks Orpik, circa 2008-2009.

That group doesn’t include the likes of newly signed Christian Ehrhoff (presumably Paul Martin’s replacement for next season), Simon Despres (he of a nice new two-year, one-way contract) and Robert Bortuzzo. Despres is a guy who is firmly on the bubble I believe. There is potential in there somewhere, I’m just not sure if he will ever realize it with the Penguins. Bortuzzo meanwhile, figures to have a roster sewn up with his ability to join the rush, and level opposing players.

In an upcoming article, I’ll lay out my plan for how the Pens should handle their abundance of defensemen. For my taste, they simply have too many with too much potential to NOT trade one for a top-6 winger.

Marc-Andre Fleury is playing for his next contract, whether it be with the Penguins or not.

New GM Jim Rutherford elected not to extend Fleury this summer, which on the surface at least, does not bode well for the former first-overall draft pick.

While I understand the decision completely (Fleury is still considered to be somewhat of a head case), what troubles me is the lack of potential talent in next summer’s UFA goalie pool.

Rutherford brought in former Arizona Coyotes backup Thomas Greiss to compete with incumbent backup Jeff Zatkoff. Griess is by far the better of the two goalies and he should make the final regular season roster. If Greiss sees any type of successful regular duty this season, then we could be witnessing the end of the MAF era in Pittsburgh.

You can check out last season’s five bold predictions and feel free to throw me under the bus on a few of them. I missed on three (and one was really off), and was spot on the other two. So bookmark this article in your browser and feel free to check back at the end of the season to see how I did.

Bold Prediction #1: The Penguins will win the Metropolitan Division This is more about the lack of talent within the division than the Penguins’ ability to win it going away.

Bold Prediction #2: Jim Rutherford will continue his joke of a tenure as Penguins’ GM by firing new head coach Mike Johnston before Christmas The Penguins will struggle out of the gate with a new system and so many new faces on the roster. That coupled with the inability of anyone in the organization to step up and do what needs to be done with Simon Despres and Rob Scuderi will spell the ultimate doom for a guy who is in a bad situation to begin with.

Bold Prediction #3: Crosby and Malkin will be uncommonly and disappointingly lackluster While it should make no difference what the players think or feel towards management or the coaching staff (respect is the word that immediately comes to mind), it will play a role in how the two superstars of this team perform. The rumor from Russia earlier in the summer is that Malkin was rather upset at the trade of James Neal, and was not impressed with new head coach Mike Johnston. Again, this shouldn’t be an issue, but for some reason it is. Crosby meanwhile will continue to disappoint in the leadership department (I’ll have more on this in a later column).

Bold Prediction #4: Multiple Penguins’ players will face multiple suspensions As I stated above, this is going to be a very nasty team to play against with Steve Downie and Nick Spaling. Don’t forget to factor in Dan Carcillo.

Bold Prediction #5: The Penguins will bow out of the Stanley Cup Playoffs prior to the Conference Final (again) Too much turmoil over the summer, and just not enough in the way of leadership on this team. This is all based on past events. I could be dead wrong (and I hope I am) and this team really does exorcise its Dan Byslam demons.

The first edition of this season’s THW-Penguins mailbag will be published on October 8th, the night before the Pens open the season at home against Anaheim. Get your questions in now to TDTorraoTHW@Gmail.com to be a part of some of the best hockey talk going.

6 thoughts on “A Recap, and Welcome, Back to Hockey”