For a team like the Anaheim Ducks who, along with its fans, are used to regular playoff appearances, this is going to be a tough month to stay excited. Unfortunately, the NHL Draft Lottery is more than three months from now but that doesn’t mean there aren’t critical storylines for the final weeks of the Ducks season. Between the race for the best lottery odds, the further development of Ducks prospects and one milestone for a veteran Duck, there’s plenty to keep an eye on for the rest of the season.

The Ducks will be in the lottery and, depending on how the next 16 games go, could increase their odds for the first-overall pick. To do that, they’re going to have to continue to lose at a high rate.

Of the four teams, the Ducks, Detroit Red Wings, New Jersey Devils and Los Angeles Kings can all conceivably shuffle positions over the next 16 games.

Senators Are at an Unreachable Depth

To catch the Ottawa Senators, who are the league’s worst team by four points — they’re eight points worse than the Ducks — Anaheim will need to lose at an even higher rate. Through 66 games, Anaheim has a point percentage of 45 percent; the Senators’ point percentage is 39 percent over that same period. Since Dec. 15, three days before the Ducks’ nosedive began, they actually have fewer wins than the Senators.

Even with their poor head-to-head record versus Ottawa, it seems the Ducks won’t catch the Senators.

In the last four drafts since the league adjusted the odds, the bottom-three teams earned the top-three picks only once, in 2015. Even that year, the teams flipped positions. The Edmonton Oilers, with the league’s third-worst record, won the first-overall pick while the Buffalo Sabres, the league’s worst team, fell to second overall. The Arizona Coyotes dropped from second to third.

In the other three drafts, and the two since the most recent rule changes in 2016, things were much more hectic. Of all the bottom-three teams in each of those lotteries, only two landed a top-three pick in their drafts. The Sabres won the first-overall pick in 2018, and the Toronto Maple Leafs received the first-overall pick in 2016. Other than that, the rest of the teams to earn a top-three pick in the draft did not have the best-three odds in the lottery. 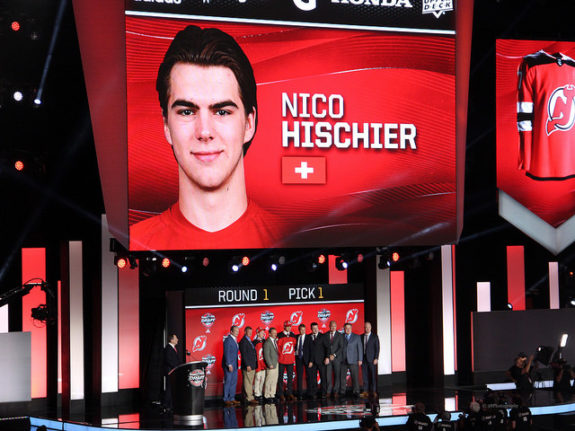 The New Jersey Devils, with the fifth-best odds in the draft lottery, won the first overall pick and selected Nico Hischier. (Amy Irvin / The Hockey Writers)

That includes the Devils who, in 2017, won the first-overall pick with the league’s fifth-worst record, right where the Ducks currently sit.

Ducks and Kings’ Series of Futility

The Ducks and Kings play each other three times during the season’s final month in what should be called “Freeway Fall-Off” rather than the “Freeway Face-Off” because the games will have a huge impact on each team’s odds in the lottery.

Obviously, the players on both teams play for pride and future employment even if they won’t make the playoffs, so they aren’t tanking. It would be an insult to suggest they are. However, with Bob Murray behind the bench and behind the general manager’s desk, he’s got a significant conflict of interest.  It’s rare for an NHL GM or coach to openly admit to tanking, but deep down, in places he doesn’t talk about in front of the media, Murray probably wouldn’t mind losing a lot the rest of the season. It will be interesting to see how the remaining Ducks and Kings matchups will play out.

The Ducks’ young prospects have developed well this season in the AHL. Max Jones and Troy Terry specifically have made impressions for the Ducks since being recalled from the AHL in mid-February. Jones has regularly shown off his strength, speed and dynamic offensive ability even if it hasn’t resulted in significant point production. 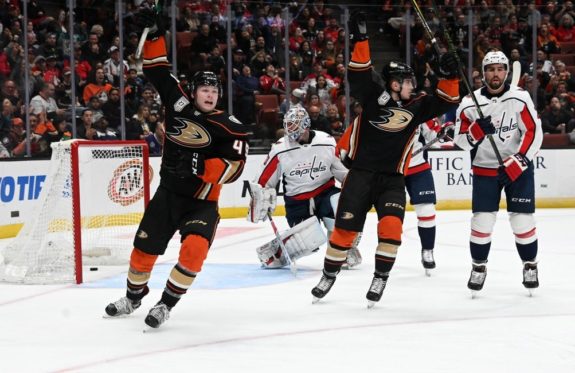 Terry, who looked overmatched in the NHL to begin the season, has shown poise in the offensive zone and an ability to play a stronger physical game than he had at first.

If you’re looking for evidence of both players’ growing composure and influence on the team’s offense, even without the points, look no further than some popular fancy stats in five-on-five situations. Over Terry’s first six-game stint in the NHL, the Ducks managed a paltry 33.8 Corsi for percentage (CF%) while he was on the ice. The percentage of high-danger scoring chances (you can check out both definitions here) that went to the Ducks (HDCF%) while Terry was on the ice, stood at 22.6 percent.

In the nine games he’s played since his most recent recall to the NHL, his CF% has grown to 54.9 percent and his HDCF% has skyrocketed to 68.3 percent. That’s the highest mark on the team for any player who’s played more than one game.

That means that while Terry is on the ice, the Ducks have had 68.3 percent of all five-on-five high-danger chances compared to their opponent. Jones has had similar success. His CF% has increased from 45.8 percent during his first four-game stint in the NHL to 52.1 percent since his most recent recall which has lasted nine games and counting.

Although Sam Steel hasn’t seen as much NHL time as of late, he’s still one of the San Diego Gulls’ leading scorers.

The Athletic’s Jordan Samuels-Thomas, a former Gull and teammate of Jones’, had high praise for all three players in his most recent article. Of Terry’s poise and playmaking ability, Samuels-Thomas wrote,

“This guy is in the wrong league,”

He was referring to Terry’s domination of the AHL. In that same article, he also said Steel could carve out a role in Anaheim’s middle-six forwards next season and that Jones might someday surpass the ability of Micheal Ferland, the Carolina Panthers’ emerging power forward.

If you’re lamenting the Ducks’ absence from the playoffs this season, pay close attention to the Gulls. They are having a strong season and are comfortably in position to qualify for the AHL’s Calder Cup Playoffs. If you’re wondering whether or not you will get to see Jones, Terry and Steel help the Gulls’ playoff run, you are in luck. Murray made sure all three players were on the Gulls roster by 3 p.m. on trade deadline day, qualifying them for the playoffs, which begin the week of April 15.

Ryan Kesler plays in his 1000th NHL game Tuesday night against the Arizona Coyotes. After joining the Ducks in 2014, Kesler had three strong seasons before suffering a hip injury that has hampered his production since. Even though he spent the majority of his career with the rival Vancouver Canucks, Kesler has had a crucial role with the Ducks as a strong two-way forward with the ability to contribute offensively, win faceoffs and generally stir up trouble.

The most interesting question is, how will Anaheim honor his achievement? The San Jose Sharks gifted Brent Burns the customary silver stick and a bottle of wine for his 1000th game. He also received a couple of gifts fitting for the burly defender who could easily be confused for a caveman, including a fossilized megalodon tooth and two antelope.

Maybe the Ducks will buy Kesler some time in the Octagon with Ryan Johansen or hire him as a host for their pre and post-game shows once he retires. If that happens, I’ll really feel for his co-hosts.

March and April can be painful for fans of any team that fails to make the playoffs, especially when that fanbase is as used to spring hockey as Ducks fans are. Fear not, there are multiple storylines to follow in the final month of the season, until the excitement of the draft lottery hits. From the quagmire that is the battle to earn the best odds in the lottery to the growth of Anaheim’s rookies to Kesler’s 1000th game, there’s still plenty to watch.

All stats from hockey-reference.com and naturalstattrick.com