July 1st, the beginning of the free agency period, is one the most exciting things to happen in hockey outside of an arena for hockey fans. For NHL general managers, however, it is a stress-filled week of making important decisions that could decide how well their team performs in the upcoming season. At least, that has been the perception for the past ten years or so.

Just how important has free agency been to team success for the current general managers of the NHL? That is what this article will attempt to figure out.

For the purpose of this analysis, I will be strictly focusing on 5v5 statistics since the 2007-08 season. Although I will mention specific players that general managers have acquired via free agency, statistics referenced will generally be the combined statistics of all acquisitions by that particular general manager. I will also be focusing on active general managers in the NHL only, with a few exceptions. Because no data has been accumulated for the acquisitions by John Chayka, Pierre Dorion, and Tom Rowe, they will be excluded from this analysis. In their place, I will include Don Maloney, Bryan Murray and Dale Tallon in this data sample.

You might be wondering how general managers are given credit for a players’ stats? For this article, they will be credited with players’ statistics for every season played since they acquired the player until they move on to another team. Statistics are only since 2007-08, but that does not exclude players who may have been acquired before then. For example, if Dean Lombardi acquired <Player X> during free agency in 2006 but that player stayed with the Los Angeles Kings through the 2008-09 season, Lombardi would still accumulate the players’ stats in 2007-08 and 2008-09. Hopefully, I haven’t confused you too much.

All statistics 5v5 and via corsica.hockey. Players are only included if they accumulated at least 100 5v5 minutes in a season. Free agency also includes waiver pickups for this article.

Certain general managers may not look to free agency when acquiring high-end, offensive talent but at the very least they will be looking for players who score more than they give up goals. Turns out, that is a big deal in the NHL.

When it comes to acquiring players with high goal-rates through free agency, look no further than Jim Benning. Wait. No, that can’t be right. Let me double-check.

How about that, Jim Benning has the highest combined goals/60 (.56) from free agent acquisitions out of all of the general managers in the league. That said, it is a rather small sample size with just four total acquisitions appearing in his data. He received a significant boost in this category from Radim Vrbata’s two disappointing seasons in Vancouver. Overall, Benning hasn’t really acquired any standout players in free agency and will likely see this statistic drop as the sample increases.

As you can see from the above chart, several of the top-performing general managers in this category have been let go or have moved on to a different position (Dale Tallon, Don Maloney). Of still-active general managers, Poile, Jim Rutherford and Ken Holland look the best in terms of goals/60 by free agents.

How about the other end of the ice now? In terms of on-ice goals against/60, Jeff Gorton leads the way with a 1.42 GA/60. Gorton is once again another one of those GMs with a small sample of data to reference, so let’s look a little further. Following Gorton is Chiarelli with a 1.92 GA/60. Not too surprising with the acquisition of Zdeno Chara on his side. In fact, Chiarelli has used free agency primarily to acquire defensive players throughout his career as a GM. Following Chiarelli is San Jose Sharks general manager Doug Wilson (1.99 GA/60). In fourth, somewhat surprisingly, is George McPhee (2.04 GA/60) who seemed to be more known for acquiring offense throughout his time in Washington. At five, with a sample size of six unique acquisitions and ten total, is Ron Hextall (2.07 GA/60).

Let’s put it all together now and look at how these free agent acquisitions performed relative to the rest of their team, focusing strictly on goals-for/against. Chiarelli sits on top here, with a 1.9 relative goals-for-% from his free agent acquisitions. Helping him to the top, are Kevan Miller, Blake Wheeler, Michael Ryder, Torey Krug and about four seasons of Zdeno Chara. Chiarelli really benefits from being able to acquire big names in free agency, like Wheeler and Chara. Marc Savard, Jarome Iginla and Andrej Sekera have also been acquired by Chiarelli through free agency and were extremely beneficial in goals-for/against.

What is somewhat interesting here is three of the top five general managers are no longer in that position, arguably four as most of Chiarelli’s work has been done in Boston and he is now in Edmonton.  Bryan Murray stepped down and Dale Tallon moved to another role with the Florida Panthers, so perhaps these stats are a coincidence. Obviously, free agency is just one small part of being a general manager, as Chiarelli and Maloney have had noted deficiencies in other areas.

What About the Shot Metrics?

Now that we have looked into goals for and against, let’s delve into some of the shot metrics and see how free agent acquisitions are doing.

Shot-attempt wise, current general managers struggled to put together a group of free agents who could consistently move the needle in their teams’ favor. Just two general managers finished in the positive portion of relative Corsi-for-% and they did so by a sliver. Brian MacLellan (.09 relative CF%) and Dale Tallon (.01 relative CF%) were the saviors here and judging by the numbers, savior is quite the generous term. 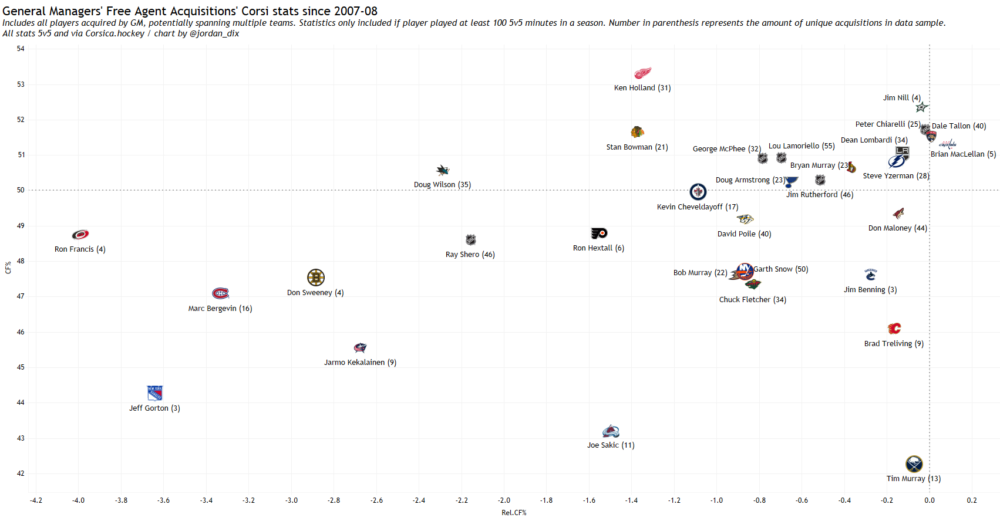 That was also observed in relative Fenwick-for-% and relative shots-for-%. Very few general managers were able to build a group of free agent acquisitions that had a relatively positive impact on shot differentials. Those that had a positive impact did not do so in an enormously significant manner.

Nobody did well in this regard and a big part of that has to be the quality of the player that reaches free agency in the first place. A player like Chara reaching free agency is the exception, not the rule. Why was the hype surrounding Steven Stamkos so palpable this year? Because a player of that magnitude rarely sees July 1st.

Free agency tends to boil down to general managers filling holes in the lineup and particularly in the bottom-six. Combine that with the immense talent found in the draft and acquired via trade, you get these poor relative shot and goal numbers. It becomes too difficult for the free agent acquisitions to keep up. That isn’t to say the relative numbers aren’t indicative of anything, just that there are plenty of factors to consider.

Ideally, a general manager will find free agents who fit well in their system and are able to hold their own when compared to drafted and players acuired via trade. If there is a general manager who is consistently filling the bottom-six with players who are shot-metric anchors (Hello Marc Bergevin), then perhaps they need to re-evaluate how they approach unrestricted free agency.