If you walk up to any Philadelphia Flyer fan and ask them what the most dreadful contract signing of the past few years has been, you will probably get one of two answers.

The first is Ilya Bryzgalov. He was signed during the summer of 2011 despite that the Flyers had a legitimate goalie prospect in Sergei Bobrovsky and despite Bryzgalov’s inconsistent stats. The Flyers were thrown a bone on this one, as the ensuing lockout permitted two compliance buyouts. Bryzgalov became one of those.

The second answer you would almost certainly get is Andrew MacDonald.

A Tough Hit on the Cap

Make no bones about it, the Flyers have failed to manage the salary cap effectively since its inception after the 2004-05 lockout. Year in and year out they are constantly pressed up against the cap ceiling with little room to maneuver. Now, that isn’t necessarily a bad thing, but the team has been in and out of the playoffs the past few seasons with a cap payroll that looks like a team that should be in the Stanley Cup Final. 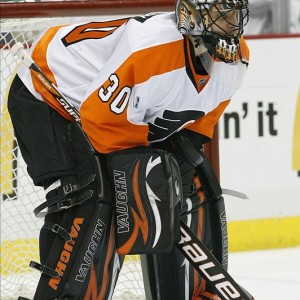 Bobby Clarke was ailing in the transition after the lockout, Paul Holmgren made some great moves before handing out several bad deals, and Ron Hextall inherited a mess that is still being cleaned up to this day.

Part of that mess is Andrew MacDonald’s whopping 6 year, $30 million dollar deal that he signed back in 2014.

That number equates to a $5 million dollar per year hit on the Flyers cap. That’s a steep price to pay for a guy who has played just 57 games over the past two seasons.

Just as a measure of comparison, MacDonald’s cap hit is along the same lines as guys like Ryan McDonagh, T.J. Brodie, Oliver Ekman-Larsson and Duncan Keith. That is a high price to pay for a guy who has had terrible possession metrics and is out of position night in and night out.

On top of that, his offensive game has been almost non-existent.

Despite averaging over 20 minutes a game since coming to Philadelphia, MacDonald has managed a total of just 35 points. That may not sound awful for a defenseman, but when you take into account that a lot of that time was spent alongside Shayne Gostisbehere, it looks pretty bad.

It’s unlikely that anyone would even bother to inquire about a trade involving MacDonald, but there is an expansion draft on the way.

There has been a little rumor swirling around Philadelphia over the past few weeks regarding MacDonald’s playing time and his eligibility for the NHL Expansion Draft this summer. Philadelphia fans claimed that Dave Hakstol was playing MacDonald so that he could reach the game threshold to be exposed in the draft.

That rule, as per NHL.com, is as follows:

That rule specifies that the Flyers will have to leave one defenseman who fits that criterion exposed in the draft. The defensemen that currently fit the bill are Radko Gudas, Brandon Manning, Shayne Gostisbehere and Michael Del Zotto (assuming he is re-signed before the draft).

That means that the Flyers will have to leave one of those three players exposed to the draft but only if MacDonald doesn’t meet the requirements outlined in the rule. However, given how much he has already played this season, he will probably break 40 games.

What’s interesting is that MacDonald could have sat out the entire 2016-17 season, and still be eligible to be picked by the Golden Knights. That is because the Flyers almost certainly will not protect him, and any player that isn’t protected is eligible to be swiped up in the draft.

The Flyers are only allowed to protect a limited number of players in the draft:

* Clubs will have two options for players they wish to protect in the Expansion Draft:

a) Seven forwards, three defensemen and one goaltender

b) Eight skaters (forwards/defensemen) and one goaltender 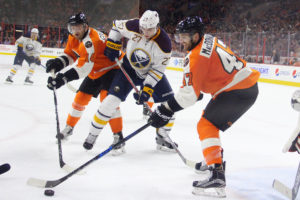 What does that mean for MacDonald? Well, for starters, it means the Flyers probably wouldn’t include him on the protected list, and as long as he’s not a part of that, he is eligible to be picked up by the Golden Knights.

So what advantage is there to getting MacDonald to that 40 game mark this season?

As I mentioned above, MacDonald is eligible whether or not he plays 40 games this season. However, if MacDonald reaches 40 games, the Flyers will not be forced to make Gostisbehere, Gudas or Manning available, MacDonald would be that player.

That holds a lot of weight for the Flyers.

Gostisbehere is going to be protected by the Flyers, there is no doubt about that. Gudas has proven to be a very effective physical defenseman since he’s cleaned up his act. That’s invaluable for the Flyers considering he is really the only physical defenseman they have on their roster. Manning has also been a very solid third-pair defender with a manageable cap-hit. The Flyers need to save cap space anywhere they can, and Manning provides that opportunity. 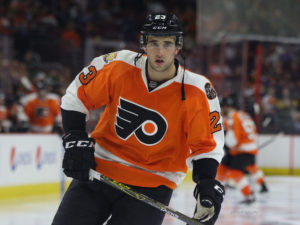 Manning has also been a very solid third-pair defender with a manageable cap hit. The Flyers need to save cap space anywhere they can, and Manning provides that opportunity. If Gudas, Manning, or Del Zotto were exposed in an expansion draft, one of them would be taken, given their lower cap hits and performance.

MacDonald’s contract is one of the worst among all defenseman, but why would Las Vegas even think about taking him?

Well, for starters, they’re going to have to reach the cap floor. That may not sound too hard to do if you’re a fan of a team like the Philadelphia Flyers, however, most teams are going to end up protecting their star players, meaning guys with larger cap hits will be few and far between in the draft. The guys who do carry the bigger cap hits will be guys like Andrew MacDonald, who aren’t terrible defenseman, but certainly don’t have performances that match the cap hit.

Unless the Flyers protect MacDonald, he is eligible to be picked in the draft, however, if he has under 40 games played, the Flyers will also have to make sure that one of Gudas, Del Zotto, Gostisbehere, or Manning is exposed. If he reaches those 40 games, then the Flyers could protect all four of the other defensemen and rid themselves of MacDonald’s costly contract.