NHL fans are familiar with French-Canadian players populating their favorite teams. Outside the freezing temperatures of Quebec, however, ice hockey isn’t so hot in central Europe. While France took home the gold in the 1924 World Championship in Chamonix, France, the team now battles to stay in contention. Despite their struggle, the continental European underdog is still home to a growing list of current and former French-trained NHL players who found ways to thrive.

The Dallas Stars’ own polarizing character, Antoine Roussel, has made his fair share of friends and enemies. Former teammate, Brenden Dillon, admitted he hated playing against a troublemaker like Roussel, and wanted to beat him up when each played for separate AHL teams. As an undrafted agitator, Roussel earned his place on an NHL roster with grit and determination. Never finding his place with Providence or Chicago, Roussel finally found himself in Cedar Park with the Texas Stars.

The Dallas Stars, on the brink of a rebuild following the 2012 lockout, needed speed and versatility. However, the organization didn’t need a goon. They yearned for a player who would participate in a full 60 minutes rather than just the final two. By February 2013, the Stars traded their agitator, Steve Ott, to the Buffalo Sabres in a surprising offseason move that was a shock to the Stars’ fan favorite. Ott’s departure left a hole in the Stars’ lineup, a slot that fits Roussel perfectly. Both forwards, oddly enough, are cut from the same cloth, one woven from fierce loyalty, dedication, and irritation.

Roussel has found success with and without the Stars in 2014 and 2015. In Dallas, he maintains streaky scoring stats as a bottom six forward. Despite slight contribution to the French national team in the 2015 IIHF World Championship, Roussel made his mark in 2014 as one of the top five scorers in the tournament.

Being the first French-born and trained player to hit the NHL, Philippe Bozon had a great weight on his shoulders. He became an influential figure to many young players in his native country, and paved the way for others to make their way in the NHL.

When the St. Louis Blues recruited Bozon, he shared a line with Brett Hull. Appearing in the NHL through four seasons from 1991 to 1995, Bozon scored few goals, but made an impact as a defensive forward.

In the 2014-15 season, Bozon coached Gamyo Epinal in the Ligue Magnus, also serving as head coach to multiple junior teams since his retirement from professional play in 2006. Now Bozon’s son, Tim Bozon, a Canadiens prospect, has the opportunity to follow in his father’s footsteps. 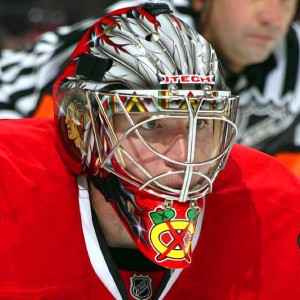 As a perennial starter for “Les Bleus,” the French national hockey team, it’s no surprise that Cristobal Huet spent seven seasons in the NHL. Playing for the Kings who drafted him in 2001, as well as the Canadiens, Capitals, and Blackhawks, Huet was the first French goalie to make it to the show.

Huet’s last NHL stint with the Blackhawks saw the 2010 Stanley Cup winner replaced by Antti Niemi, who went on to win the Cup as well. Before his demise as a backup, Huet was a star in Washington, backstopping the struggling team to the 2008 playoffs, the Capitals’ first appearance since 2003.

Now 39 years old, Huet plays for Lausanne HC of the Swiss National League A. The seasoned goaltender is not yet ready to hang up the skates, as he has played in net for France in the last five IIHF World Championships. Having only earned his first shutout for the national team in 2015, a 2-0 win over Austria, it’s clear that Huet will keep pushing to play the game.

[Related: Which European FA is Next to Join NHL?]

Currently under contract with CSKA Moscow, Stephane Da Costa spent four seasons in the Senators organization. Da Costa, a native of Paris, grew up playing near his home before making the move to Texas to join the NAHL Texas Tornado at 17 years old. Three seasons into his North American junior career, Da Costa scored 31 goals with the Sioux City Musketeers, before turning to Merrimack College. As the first freshman in the NCAA to score a natural hat trick as part of a five-goal game during which he saw his first career goal, Da Costa turned heads.

By the age of 21, Da Costa received attention and offers from 20 NHL teams before signing with the Senators. Following his NHL debut in April 2011, however, he spent most of his short North American career with the Binghamton Senators of the AHL. Da Costa’s professional experience paid off in the 2014 and 2015 IIHF World Championships, as he scored a shootout game winner in 2015, but made a bigger impact in 2014 by scoring both goals in France’s upset versus Canada.

While Da Costa held the French national team in the game versus Canada, Pierre-Edouard Bellemare scored the 2014 game winner that helped France edge out the national hockey powerhouse 3-2. As the second of two French-trained players finding success in the NHL, Bellemare is making a name for himself with the Flyers.

With six goals and six assists in his rookie season, the 30 year-old winger signed a two-year contract late in 2014-15. At long last, Bellemare is catching his break in the NHL following a long career with Skelleftea AIK. Flyers GM, Ron Hextall, spoke highly of him following his signing:

“He gives us speed, he works hard. He is an intelligent player. He’s always available for the puck and puts the puck in the right place. And he’s capable of doing some things offensively. He’s a good person, too.” – Flyers GM, Ron Hextall via CSN Philadelphia

Diversifying European Representation in the NHL

Since the 1960s, European players have gained greater opportunity in the National Hockey League. In the years following Bozon’s addition to the St. Louis Blues roster in 1991, gaps between French acquisitions have not prevented the nation’s players from carving their own paths to North America. Despite remaining undrafted, four of these five players took a different path, turning heads and climbing their way to the top. Each made a significant contribution to their national team, and Roussel and Bellemare continue to lead the slow, albeit passionate charge to the NHL.