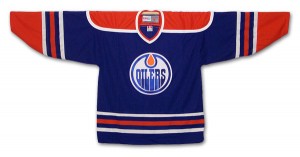 Nineteen games into the season, and the 2010-11 edition of the Edmonton Oilers have a record of 5-10-4, good for 14 points and the 28th spot in the NHL. They are dead last in the Western Conference, and last overall in goal differential, scoring 49 and allowing 77. Going into the season, there was a lot of positivity and excitement surrounding this team. New coach, three supremely skilled rookies, a healthy Ales Hemsky and Nikolai Khabibulin. But so far, with just 5 wins on the year, and some brutal losses, any optimism for the playoffs has all but disappeared in Edmonton. Maybe it wasn’t fair to expect anything big things from this team, but perhaps what was expected, was a better record.

Through 19 games in 2009-10, the Oilers had a record of 8-9-2, good for 18 points. Not vastly different than this season, but it was better. Last year at this time, they had allowed 5 goals just once in game (a loss to Calgary), and had yet to allow more than 5 goals against. This season, they’ve allowed 8 goals once, 7 once, 6 goals twice, and 5 goals three times. Is it possible that the defense is actually worse than last year? At the conclusion of the 2009-10 season, the Oilers finished dead last in the NHL in points, and in goals against. They committed an egregious amount of turnovers and giveways. They somewhat addressed the weaknesses on the blueline by signing Kurtis Foster and veteran Jim Vandermeer in the offseason. The jury is out as to whether they have been an improvement or not. The Oilers powerplay is running at 14.5%, good for 25th in the NHL. Their penalty kill is currently rated at 68.4%, landing them last in the league in that category. Last season, they finished 18th overall on the powerplay and 26th on the penalty kill. Although there’s just a small sample size to draw from this year, right now the Oilers aren’t performing better than they did last year, and are on pace to finish with worse stats.

Obviously, when a team is rebuilding as the Oilers are, patience is required, but this team hasn’t made the playoffs since 2006, and although it’s early, it will take a lot of wins to avoid missing the postseason for the 5th year in a row. Make no mistake, the Oilers have been drafting well and are on the right track, but if the fans were hoping for a worst to first scenario, it’s probably not going to happen. The best thing for the team at this point would be another lottery pick in the draft, because adding another high end prospect would do nothing but help. They’ll have to find a way to beat out the New York Islanders if they want that first overall pick again though. Do you think the Oilers will finish 30th in the NHL for the second year in a row?