GLENDALE, Ariz. — Christian Dvorak and Michael Grabner each scored two goals and Darcy Kuemper made 33 saves to win for the ninth time in 10 starts to lead the surging Arizona Coyotes past the Los Angeles Kings 4-2 on Saturday night.

Dvorak’s second goal broke a 2-2 tie midway through the third period and Grabner scored on a breakaway with four minutes remaining as the Coyotes won for the eighth time in nine games while setting a franchise record with their first 6-1 homestand. 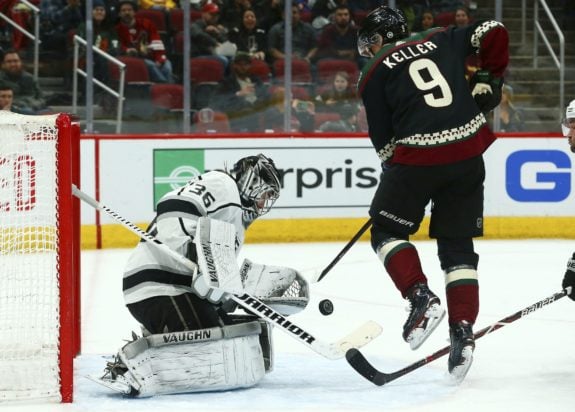 Kuemper has given up just 16 goals in his last 10 starts.

Adrian Kempe and Carl Grundstrom both scored and Drew Doughty had two assists for the Kings, who have lost 13 of 14.

The 21-year-old Grundstrom tied the game at 2 with his first NHL goal at 3:44 of the third period. Grundstrom, promoted from the American Hockey League on Saturday, was acquired from Toronto in the trade for Jake Muzzin on Jan. 28.

Dvorak tipped in a slap shot by Jakob Chychrun from the left point on a power play to give the Coyotes a 1-0 lead at 7:23 of the first period. Dvorak underwent surgery for a torn pectoral muscle early in the season and had his first goal in six games since being activated. He had 15 goals in each of his first two seasons.

Grabner’s fifth short-handed of the season gave the Coyotes a 2-0 lead two minutes later, in his second game after missing the previous 41 with an eye injury.

Kempe used his speed to score late in the first period to make it 2-1, beating a Coyotes defender along the boards and skating in on Kuemper.

NOTES: The Coyotes have won seven of the last 10 meetings. … The Coyotes are 25-1-1 when leading after two periods. … Kings forward Anze Kopitar, held scoreless, has 24 goals and 66 points in 66 career games against the Coyotes. … Los Angeles’ Jack Campbell had 28 saves while starting for Jonathan Quick, who has given up 26 goals in his last six starts.

Kings: Finish a two-game trip Sunday at Anaheim with the second of back-to-back games. The teams will play three times in a 13-game span.

Coyotes: Open a two-game road trip Monday in Chicago, where former Blackhawk Vinnie Hinostroza had a two-goal game in the Coyotes’ 4-1 victory Oct. 18.