That’s when the university announced a partnership with the Arizona Coyotes, and will begin playing home games in the Gila River Arena.

Signed for four dates through the up-coming season, the association between the Sun Devils and the Coyotes may only address the 2015-16 season, but the goal for the university is to eventually play their home games in the arena.

As Arizona State moves into elite Division I status, its playing facility needs to be upgraded. That’s to reflect the increased prestige of the program and characterize the incentive behind the Sun Devils move into an NHL arena.

Speaking during a news conference Wednesday afternoon on the Arizona State University campus, representatives of the Coyotes and Sun Devils expressed their collective hope and desire that this embryonic association can flourish and grow.

“Right now, the agreement is just for the season ahead,” said Anthony LeBlanc, the Coyotes CEO. “We hope and look forward to a long-term association with Arizona State. For now, we’re excited to share the building with the largest university in North America.”

As graduate and under-graduate students are listed at 83,301, college officials hope to tap into the local community as well as school graduates. That’s to generate interest within the university itself and gain alumni support.

While LeBlanc listed the three obvious reasons why a university would engage in the highly competitive Division I level, he was also quick to point to overall benefits.

“There’s a great demand to watch hockey in the state of Arizona,” LeBlanc said. “I think that’s because of the vibrant nature of hockey around here.”

Going forward, LeBlanc placed those three objectives on the table.

For now, the Sun Devils move to a hybrid schedule, and play significant Division I schools.

The up-coming dates for the Gila River Arena include Friday October 3 against the University of Arizona, a four-team tournament called the Desert Hockey Classic, and a game against the USA under 18-year-olds on Sunday Feb. 28.

Schedule for the Desert Hockey Classic engages UConn against Michigan Tech on Friday Jan, 8 at 5 p.m. (local time) followed by Arizona State and Yale at 8 p.m.

Consolation game will be played on Sunday Jan 10 at 12 noon and the championship match will follow at 3 p.m.

On Saturday Jan. 9, teams were expected to take in an NHL game between the Arizona Coyotes and Nashville Preds in the arena.

With the 2016-17 full schedule of Division I opponents ahead, Arizona State will play an enticing schedule. Though teams have not been announced, the slate of games reflects the desire of school officials to rapidly move forward.

“We want to play with the best,” said Ray Anderson, the Sun Devils’ athletic director. “Not only to play but to compete at this level, we have the play the big boys.” 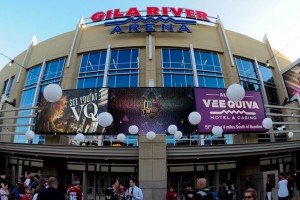 While the Sun Devils play a limited of games this coming season in Gila River Arena, just skating in an NHL rink is a powerful recruiting tool.

“This legitimizes our program,” said Greg Powers, the Sun Devils head coach. “Because the program is so new, the message we tell recruits is, ‘be the tradition.’ Now, we can add playing in an NHL building. For the program, that’s’ exciting.”

Since last November’s announcement that Arizona State moved to Division I, additional attempts have been made to up-grade the program. The first is to translate Powers’ high energy and passion for the game into a sellable package to scholar-athletes in the United States and Canada.

A native of Indianapolis, Powers is a graduate of Arizona State.  As goalie, Powers was a three-time ACHA Division I All-American net minder.

Starting with his first year as head coach in 2010, Powers has helped lead the Sun Devils to five consecutive ACHA National Tournament appearances, and their first ever ACHA Division I national championship.

In the 2013-14, Powers helped guide the Sun Devils to their first ever ACHA Division I National Championship. He holds a 164-27-9 career record, and his team ended the 2014-2015 season ranked third in the ACHA with a 35-4-1 record. In the progress, the Sun Devils qualified for the team’s third straight ACHA Division I Final Four.

While the agreement for this coming season is limited, the Sun Devils will continue to play the majority of their home games in the Oceanside Ice Rink near campus.

Opened in 1974, the university began its club program at Oceanside in 1985, and the Coyotes used the facility for practice during their first two seasons of operation in the desert.

Recently, there was a $300,000 upgrade to the facility, but the Sun Devils hope to gradually transition to the Gila River Arena. Seating capacity at Oceanside is only 650, and the facility is worn by constant play from various leagues in a myriad of age groups.

Mark Brown is a former sports editor for daily newspapers in the Philadelphia and Cincinnati markets. He was named Best Sports Columnist, honorable mention 2004 by the Associated Press Society of Ohio. He is a contributor to major daily newspapers, including the Chicago Sun Times, Philadelphia Inquirer, Honolulu Star-Bulletin, Milwaukee Journal, Arizona Republic, Nashville Tennessean and the Associated Press. He was a Featured Columnist for bleacherreport.com and covered the Arizona Coyotes.