What factors make hockey the most exciting sport? In addition to the fast and rough play, each team portrays a personality indicative of its region and history. While the Montreal Canadiens’ or New York Rangers’ branding and communication conveys a sense of storied dignity, younger expansion teams like the San Jose Sharks or Dallas Stars appeal to their fans’ modernity and irreverence.

As each team portrays a character, so does each arena. The common representation of the Bell Centre in Montreal is that of a rapturous mob. Instead, the American Airlines Center in Dallas, or the BB&T Center in Sunrise serve as examples of regular season insouciance. In these arenas, the fans go as the team goes.

When the home team is scoring, the audience experiences a rush, producing energy off of which the team feeds. Once the team finds itself down by three, digging out of a hole, the fans impose radio silence. After a string of impotent shifts, the crowd boos a power play that concludes without a shot on goal. As the team exits the ice at intermission, their confidence deflated, on a downward spiral, the fans walk out prematurely to queue up for concessions before the buzzer sounds. By the end, how does audience participation, including positive, negative, and indifferent feedback, affect the game?

Booing the Home Team – The Arena and The Work Place

It is true that any profession faces adversity and criticism. Without it, anyone would be lost. Creativity, after all, is born of constraint, and criticism begets improvement. The everyday career of the NHL player, however, is vastly different from any work day the average person faces. Former Montreal Canadiens goaltender, Jacques Plante, explained his perspective on his “noble” position.

“Goaltender is a normal job. Sure! How would you like it if at your job, every time you made the slightest mistake a little red light went on over your head and 18,000 people stood up and screamed at you?” – Jacques Plante

In the average day, one’s coworkers are rarely embarrassed with a flashing red light and air horn every time they make a mistake. It would be quite a sight to watch neck ties and blazers thrown at the feet of an accountant when his or her clients are unhappy with their annual refund (though it would be even better to see little green visors tossed en masse after filing three tax returns successfully). A professional athlete’s workday is drastically different from what most people will ever experience. This is common knowledge.

In adulthood, the players know what they signed up for, and the arena is a completely different venue than the office with different norms. However, do these factors preclude the players from the same psychological impact that would befall the average person in the same situation? How many understood the full impact the game would have as an adult when they were children working their way into the field? This is just food for thought.

One major difference between the NHL workday and the stereotypically “average” workday is one of numbers. One side of the argument contends that a higher volume of criticism, chanted from a crowd of 18,000+, generates a greater blow to the psyche and performance than criticism from smaller numbers of people. The other side argues that interpersonal, face-to-face criticism is more imposing, triggering a stronger effect than the taunting of a faceless audience. In any occupation, enduring duress when one is already under internal pressure results in beating a dead horse. By that point, the task at hand feels Sisyphean.

Regardless of the criticism’s volume and proximity, when a certain emotional tone precipitates, it rubs off on others. This is an example of social contagion. Like passing around a yawn, a negative attitude has a contagious effect. Acting as a part of a group under pseudo-anonymity encourages disinhibition, but also promotes participation due to increased community identity. Cognitive psychologist, Albert Bandura, examined what he termed “disinhibition of aggression through diffusion of responsibility.”

Bandura’s studies determined that in groups, individuals behave more aggressively due to the shared responsibility for poor behavior. No one person stands out for their actions when they can hide behind the choices of the majority. In sports arenas filled with thousands, joining in contributes to the fun, but it also perpetuates behavior in which one might not engage individually.

Not only does an uptick in positive encouragement shift the energy of an arena for the better, but it also provokes a psychological response in the recipient. The tone in which others deliver feedback is instrumental to progress. Feedback given with a positive tone, even if providing criticism rather than praise, activates the brain’s reward circuitry. Unearned praise is not the object when cheering a team to success. Instead, offering encouragement before criticism is the objective.

To Cheer or Boo – Which Behavior Provokes a Desirable Outcome?

In a study of “cheers vs. jeers,” researchers studied athletes across various sports to determine the impact of social facilitation, including cheers, jeers, and silence. While noise of any type harmed golfers’ performance, only jeers harmed baseball pitchers, and cheering and jeering had no effect on basketball free throws. The study concluded that each activities complexity determines the overall impact.

In 1993, Finnish researcher, Simo Salminen, explored the effects of audience behavior on athlete performance in hockey and soccer, finding that positive feedback for the home team resulted in more goals, but also more penalties and fouls. Support for the visiting team, however, also positively provoked the home team. Salminen did not research the effect of negative feedback on the home-team advantage. In 1983, Greer gave more focus to this type of negative audience behavior.

Greer’s study concluded that audience support helped the home team and hindered visiting teams, as one expects, but what happens when the audience boos the home team? Thirer and Rampey determined that extreme negative audience behavior is also a detriment to the home team advantage.

“Normal audience conditions were associated with fewer fouls and turnovers for the home team compared to visiting teams. Yet, in 5-minute periods following extreme negative audience tactics (i.e., behavior beyond normal ‘booing’, such as throwing objects, fighting, chanting obscenities), the home team tended to have more infractions than visitors. That is, extreme anti-social behaviors of the audience were predictive of performance decrements for the home team; this audience behavior was not related to changes in performance of visiting teams.” – Epting, Riggs, Knowles & Hanky

When Moore and Brylinksy studied the absence of an audience in 1993, they found that both home and visiting teams performed better. Though this study included research on basketball teams, the findings may account for the Florida Panthers’ improvement in the 2014-15 season.

In the case of championships, alternatively, positive audience feedback is shown as a detriment. Increased audience pressure caused teams not to be outplayed by the opposition, but to outplay themselves, as Dr. Roy Baumeister proposed in his study, Disputing the Effects of Championship Pressures and Home Audiences. Wright, Voyer, Wright, and Roney supported Baumeister’s evidence by testing this effect on hockey players in 1995. This phenomenon explains why hard-working, aggressive contenders like the San Jose Sharks or Anaheim Ducks succeed in the regular season, yet choke in the playoffs.

So, what are audiences to deduce from these studies? The home-team advantage is real, and athletes cite the importance of positive audience feedback as a value to their success. Still, positive feedback aimed at the opposing team can also have a positive impact, while extreme negative audience behavior results in a less disciplined team performance. Under playoff and championship pressure, audience encouragement can instead cause a team to outplay themselves, choking when success matters most.

NHL history is rich with the hats, octopi, rubber rats, fish, a waffle, hoodies containing the owners’ cell phones, and even a live chicken that have been tossed to the ice. While throwing jerseys on the ice after a home loss is disrespectful and expensive (Ben Scrivens might even throw it back), tossing anything on the ice is both dangerous and disruptive.

When fans throw hats in celebration of a hat trick, the players anticipate the action after scoring the third goal and can prepare for a barrage of the soft objects (unlike the rubber rats thrown at Panthers games). The same is true of team-organized teddy bear toss events. When players cannot anticipate thrown objects such as a discarded jersey, it disrupts play and presents a hazard while skating.

In fact, the Panthers’ Rat Trick is the reason rule 63.4 exists in the NHL rulebook. Articles thrown for a special celebration do not result in a bench minor. In the first event of an object thrown on the ice, play is stopped and the face-off occurs in the zone nearest to where the object fell. Further behavior will result in harsher imposition on the home team.

“In the event that objects are thrown on the ice that interfere with the progress of the game, the Referee shall blow the whistle and stop the play and the puck shall be faced-off at a face-off spot in the zone nearest to the spot where play is stopped. When objects are thrown on the ice during a stoppage in play, including after the scoring of a goal, the Referee shall have announced over the public address system that any further occurrences will result in a bench minor penalty being assessed to the home Team.” – Rule 63.4 of the Official NHL Rulebook.

In essence, throwing objects on the ice in protest of bad play is counterintuitive, as the behavior compounds the home team’s challenges. Fans who are upset about an already suffering game continue to set the team back further.

Deducing the Ideal Ratio of Encouragement and Criticism 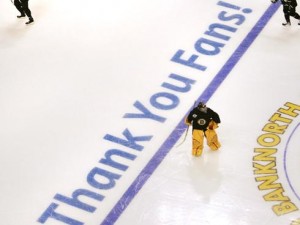 The primary argument is not to lend praise when it is not deserved, but instead for fans to behave in a way that befits the outcome they wish to see. An argument against jeering the home team is not based on hurt feelings and bruised egos, but on the crowd’s ability to help drive the game. To perpetuate failure and diminish discipline with negative feedback, especially the extreme variety, is not productive and should be avoided.

Booing and jeers toward the home team will never disappear, but studies show that bad behavior in the stands provokes higher penalty minutes, and encouragement for either team makes a positive difference. Fundamentally, avoiding extreme negative feedback is the most important factor in playing the 5th line; a responsibility that fans have to each other to generate energy and, at the very least, create an enjoyable arena atmosphere.