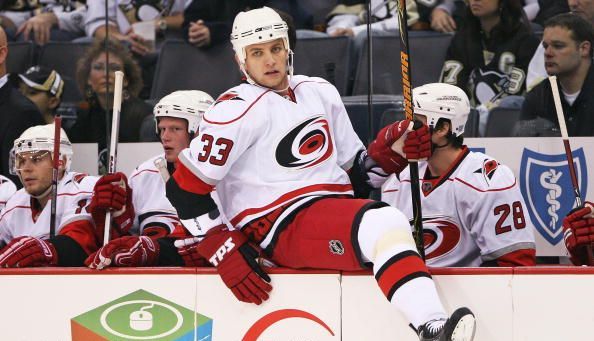 I won’t go into last night’s demoralizing 5-0 loss to the Florida Panthers, who are inching closer and closer to securing that 8-seed. Between hard economic times and horrific plane crashes, no one wants to read what I have to write about that game. Needless to say, almost everyone on the ‘Canes roster played poorly when it mattered most. Cam Ward was shaky at best, the Staal-Samsonov-Ruutu line did not learn from the third goal in time to stop the fourth one 12 seconds later, and the ‘Canes defense was simply hapless. Corvo and Gleason played poorly, and Wallin and Rodney weren’t in sync either.

Strangely, however, the pairing of offensive-minded D-men Joni Pitkanen and Anton Babchuk was even on a night when almost everyone else was in the hole. Pitkanen has been off and on all season, but Babchuk has been the greatest surprise of 2008-2009.

You may never have heard of Anton Babchuk. He was a first-rounder from 2001 that looked as though he was headed down the slippery slope to RealEstate-ville after an unimpressive showing with Chicago. The Kiev, Ukraine native was a young defenseman that was forced far too soon into the big leagues to help out a struggling team. He spent one year in the Russian Super League before making his NHL debut. He was tall and talented, but had a problematic ego. The one thing you may actually know him for: while playing for the Blackhawks’ AHL affiliate, the Norfolk Admirals, Babchuk incurred a five-game suspension for throwing a water bottle into the crowd (okay at a concert, not at a hockey game.) During the 2005 playoffs, Babchuk was heckled by a few Philadelphia Phantoms fans while sitting in the penalty box. Babs didn’t take it well. He threw his water bottle into the stands, reportedly hitting a seven year old boy. The AHL suspended Babchuk for five games as a result.

The Hurricanes picked him up the following year in exchange for Danny Richmond. Babchuk wowed crowds with his booming slapshot and even scored a dandy of an overtime goal against Atlanta, showing far more dexterity than a hulking defenseman should with a deft backhand. However, his play in front of his own net was not quite as solid, and he spent a lot of time in the press box. The ‘Canes won the cup that year, but as Anton failed to meet the requirement for games played during the regular season and didn’t appear in the playoffs, the Hurricanes had to petition to have his name put on the cup. The petition was granted.

The next year, trouble brewed. After a few defensemen came back from injury, the Hurricanes had far too many blueliners to fill six spots. Though Babchuk had played well enough to stay in the line-up, he was the only defenseman with a two-way contract and was assigned to Albany. This is getting repetitive, but he didn’t take that well either. Babchuk stubbornly refused the assignment and was suspended by the Hurricanes. (Although, let’s look at it from his perspective: would you really want to be sent down to a team called the “Albany River Rats?”) Rutherford spoke to him and worked it out, and eventually he accepted the demotion. He played in nine games with the River Rats, then made some adjustments.

Babchuk spent the next season with Avangard Omsk of the Russian Super League and had easily his best offensive season to date. He was plus-8 and had nine goals and 15 assists in 57 games. No one expected to see him back in Carolina, but before this season, he and Rutherford had a heart-to-heart and Babchuk was signed to a one-year, $1 million deal. He came back to America with a new look, a new number (33, his number in Omsk) and a better attitude.

You may not have heard much about Babchuk, but at the rate he is improving, you will. Though he was scratched during the early season in favor of veterans, he found his way into the line-up and stayed there. After a few early gaffs, Babchuk has shored up his defensive game and is solid in front of the net. He has learned to use that hulking, 6’5 frame to hit and fend off opposing players. He has gotten quicker, which was a concern during his first tenure in Carolina. He has been rewarded with ice time, going from the single digits in the early season gradually up to the 25 minute mark last night, and is on Carolina’s second line of defensemen with recently-acquired and fellow first rounder Joni Pitkanen.

Babchuk was named the first star against Phoenix without registering a point, though Tuomo Ruutu had two goals and Sergei Samsonov had a four-point night. Maurice has had the faith in Babchuk to put him out there during key moments in the game of late. He occasionally slips up, but he is, after all, 24. And not Niclas Lidstrom.

Most importantly, his point production has gone steadily upward. He has reached new NHL bests this season with 4 goals and 8 assists, which doesn’t sound like a lot for 45 games, but if you looked at the replays and timing of those goals, they were really very impressive. And, of course, no more water bottle throwing or reassignment temper tantrums…so that’s good.

Someone asked me recently who I thought the MVP of 2008-2009 season so far has been. Obviously names like Ruutu and Whitney were thrown around, but they have hardly taken control of the season. In fact, no one has really been consistent enough to run away with an MVP title. However, my vote for the “Most Improved” category has already been sealed and stamped: Anton Babchuk, who almost became one of those “Where are they now?” fun facts while he toiled away in Russia, has really upped his game this season. Watch for him down the stretch.

2 thoughts on “Babchuk is back and better than ever”