If the NHL were a playground, the Western Conference would be the pack of bullies who steals your lunch money and dignity. Going into the Olympic break, consider the Western Conference’s four teams that have exceeded the 80 point benchmark to the Eastern Conference’s one. Suddenly, Chicago’s two Stanley Cup Championships in four years doesn’t appear to separate them from their geographical brethren. So are they still the favorite? 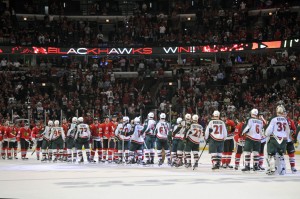 The Chicago Blackhawks made quick work of the Minnesota Wild in last year’s quarterfinal, winning in 5 games(Rob Grabowski-USA TODAY Sports)

With the abundance of competition in the Western Conference, earning a trip to the Stanley Cup Finals is like beating a video game at the hardest level on the first try. The road to the Finals, however, doesn’t include beating every single team. In last season’s playoffs alone, the Detroit Red Wings shocked the Anaheim Ducks in the quarterfinal, despite trailing the favored Ducks 3-2 in the series.

Detroit’s upset series win over Anaheim is one of many that do, in fact, happen every year. When a heavily favored team goes down, the pathway to the Cup becomes less bumpy, no matter what the final regular season standings say.

“It’s not something you think is going to happen,” said Anaheim’s Corey Perry after last season’s eliminaiton. “You get the job done throughout the year, but it just didn’t seem to be there in this series.”

Although Chicago’s greatest threat to being victimized by the ever occurring playoff upset came from those very Red Wings last year, beating Detroit in a Game Seven 3-2 overtime win, Joel Quenneville’s seasoned team continued to be the exception to the rule. Even the Eastern Conference’s top seed, the Pittsburgh Penguins, were embarrassingly swept by Boston in the Eastern Conference Finals.

“The possibility of upsets is one of the things that makes the first round of the playoffs so compelling — and it’s not just the No. 1 seeds that are in peril. In fact, better than one third of all recent first-round series have ended in upsets. During the 11 seasons since the NHL went to 30 clubs in 2001, we’ve witnessed 31 out of 88 first round series in which a team with an inferior record has taken down an opponent that had a stronger regular season. That averages out to almost three first-round series upsets per year.

In 2006, four top teams were ambushed in the first round — all in the Western Conference, including the Presidents’ Trophy-winning Red Wings, who had one of the great 82-game regular seasons ever (124 points). But they lost in six games to the 95-point, eighth-seeded Oilers. That series victory helped propel Edmonton to the Cup final.” — Sports Illustrated

The Western Conference may be the league’s lion den when it comes to the regular season, but historic playoff performances by teams like, the St. Louis Blues and San Jose Sharks shrink the West’s intimidation factor. While it’s true that the Eastern Conference holds teams of similar reputation, underperforming teams out west even the playoff landscape dramatically. 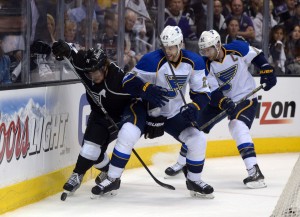 Alex Pietrangelo and the Blues will try to make their 1st Stanley Cup appearance since 1970. (Kirby Lee-USA TODAY Sports)

The St. Louis Blues pose a serious threat to the Blackhawks this season. Not only has Ken Hitchcock’s team flagged down their division rivals in the standings, they’ve also beaten the Hawks in all three of their previous matchups. The Blues are tied in points with the Blackhawks for the Central Division lead with 84 points, but St. Louis holds three potentially pivotal games at hand.

St. Louis entered the Olympic break winner’s in seven of their last ten. Defensemen Alex Pietrangelo and Jay Bouwmeester, member’s of Canada’s gold medal-winning team, look to pick St. Louis’ momentum up right where it was left off.

“I saw ‘Hitch’ on the ice after the game, and I said, ‘That’s one championship, one more to go this year.’ It’s special to share that (gold medal) with them. We’ve obviously been through a lot together and now back to reality, to win here in St. Louis,” said Blues and Canadian defenseman Alex Pietrangelo.

With the Blues soaring, few are overlooking their talents that boasts an NHL best plus-61 goal differential, and their five home regulation losses. However, St. Louis has shown this season, and in the past, that they are not invincible.

“The Blues ended up with four total goals in each of their last four games that were decided beyond regulation, but they need to improve a power play that’s gone 0 for 18 in the last three overall contests.

They also need Jaroslav Halak to match the form that allowed him to post a 1.94 goals-against average in his last four NHL starts as he returns from a rough performance in Sochi. Halak had a 5.13 GAA in two games for Slovakia.

Alexander Steen, who won a silver medal with Sweden, ranks among the NHL leaders with 28 goals but has one and no assists in the last five games. He had a goal and an assist in a 3-2 overtime loss to the Canucks (27-24-9) on Oct. 25 and sat out a 2-1 defeat at Vancouver on Jan. 10 with a concussion.” — CBS Sports

The Blues have qualified for the playoffs 36 times throughout their franchise history. Of those postseason appearances, the Blues have gone to the Conference Finals four times, winning twice. When playing for the Stanley Cup, St. Louis is 0-for-2, despite not even playing for hockey’s most coveted prize since 1970. The Blues have continued to live up to their “playoff bust” label, losing in the 1st round of the playoffs in four of their last 5 appearances.

The San Jose Sharks are quite the curious case. Their six Pacific Division Championships and one Norris Trophy would lead one to ask next, how many Stanley Cups? Not only have the Sharks never won a Stanley Cup, they’ve never even played for one. San Jose has appeared in three Western Conference Finals, only to come up empty on all three tries.

As the playoff losses mount, so does the frustration throughout the organization. Before losing Game Seven of last year’s semifinal round against the Los Angeles Kings, the Sharks were shown the door by the St. Louis Blues in the previous year’s playoffs.

“It’s brutal,” said Sharks defenseman Dan Boyle. “All the hard work in the summer, all the 82 games, the playoffs, preseason, practices — it sucks and it’s very frustrating. It’s not a good feeling.”

After struggling to qualify for the playoffs last season, the Sharks are sitting more comfortably this year. With 80 points through 59 games, San Jose should have no issues gliding into the playoffs and enjoying home ice advantage in a series or two. Should the paths of the Sharks and Blackhawks cross, both teams will be sure to remember 2010’s Western Conference Finals sweep. Chicago’s goaltender at the time, Antti Niemi, is now stopping pucks for the Sharks, which would add an interesting twist to the potential storyline.

Anything Can Happen In The Western Conference

Although the Blackhawks won the Stanley Cup last season, along with the Presidents trophy, they’re no strangers to defeat after overly productive regular seasons. In the two years between their championships, the Hawks were disposed of in the 1st round in back-to-back years. 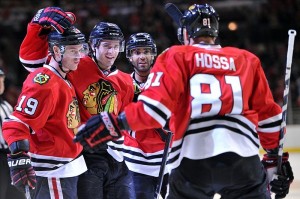 In 2011, the Vancouver Canucks outlasted Chicago in seven games, despite the Hawks collecting 97 points during the regular season. In the following year, the Phoenix Coyotes ignored Chicago’s 101 points, sending them packing after six games. Two Stanley Cups in four seasons, however, have taken the attention off of those disappointments and on to possibly labeling the Blackhawks a “modern dynasty.”

“There’s still a long way to go with that,” said Blackhawks captain Jonathan Toews. “I’ve seen that as the term, ‘modern dynasty,’ that people have thrown out. With the group that we have in Chicago, I mean last year we had a great team and a great bunch of guys and once we got through that series with Detroit, if we didn’t believe in ourselves before, that was really our moment. To come back like that against the Red Wings, that’s when we knew we could come back from anything. There’s always something, especially in the past four or five years, with the guys in our leadership group, that whoever comes in and surrounds that group, we are just a team that is really tough to get rid of and tough to beat. A lot of things have to go wrong for us to lose in a playoff series.

“If we can keep that way about us, and continue to believe like we have before, there is no reason we can’t find ourselves back in the Stanley Cup Final and competing for another championship.”