It seemed so innocuous at the time . . . harmless really.  When former Blue Jackets GM Scott Howson proposed a tie-breaking revision that would make non-shootout wins the first tie-breaker for playoff determination, it was viewed as a sensible little move, appeasing the haters of the shoot-out.  Even in Columbus, it was viewed as a benign change, particularly given the club’s lousy shootout record at the time.  It was almost a cute suggestion, like a puppy.  Well, from the Columbus perspective,  that innocent little puppy just grew fangs, and, with just two games left in the regular season, could take a big bite out of the club’s 2012-2013 playoff chances.  Let’s review all of the pertinent playoff mathematics.

Games Out of Hand

Up until today, the “true” standings were difficult to assess, as the Blue Jackets had worked their way through the schedule at an accelerated pace, giving the other contenders the dreaded “games in hand” as the stretch run unfolded. This puts Columbus in the unenviable position of having to sit on the couch and watch as the other clubs even up the schedule. To be sure, the Blue Jackets have done their part in the playoff drive, going 4 – 1 on a year-end road trip thus far — a trip that most figured would be irrelevant, and the rest figured would quickly dispatch any playoff aspirations the club might have.  Still, those heroics might not be enough.

The Minnesota Wild currently hold seventh place in the West, with two games remaining.  Sitting at 53 points, with 21 non-shootout wins, the Wild clinch a playoff spot with a win in either of their last two games.  That puts them at 55 points, and while Detroit could pass them with 56, Columbus maxes out at 55, and loses the non-shootout win tiebreaker with the Wild, as their maximum value is 19 in that category.  If the Wild go 0-1-1 or 0-2-0, they risk falling completely out of the playoff picture.

Detroit, with its 3-1 victory over Los Angeles last night, sits in the final playoff slot with 52 points, and 20 regulation/overtime wins.  They accordingly control their own destiny, and clinch a playoff spot with a record of 1-0-1 or better in its last two.  Again, if the Blue Jackets tie Detroit, they lose the Howson tiebreaker.

The Dallas Stars remain mathematically alive, primarily due to the fact that the schedule makers saw fit to have the Stars play Columbus and Detroit in its final two games.  With 48 points and 20 non-SO wins, the Stars task is simple mathematically, not so easy in practice.  They must win both of their remaining games, while Detroit and Columbus must each lose both of their remaining contests — with Detroit losing both in regulation, and Columbus losing at least one in regulation.  The good news for Dallas?  Both games are at home.  The bad news?  The Stars have a very indifferent 11-9-2 record at the American Airlines Center.

For those keeping track, Phoenix was eliminated last night, despite winning their game.  Also sitting at 48 points, they max at 52, but cannot win the tiebreaker with Detroit.

The Blue Jackets have the most complicated playoff situation from the mathematical perspective, due in part to the fact that they lose the first tiebreaker in most situations.  However, if the Blue Jackets win both of their remaining contests, they end up with 55 points.  That eliminates Dallas, and forces Detroit to earn 3 or more points in its final two games to beat out Columbus.  In that scenario, Minnesota must earn two points in its last two games to edge Columbus (again on the tiebreaker).  If Detroit wins out in regulation, Minnesota needs a 1-0-1 record, with a regulation win, to edge out the Red Wings, as Minnesota wins the head-to-head tiebreaker.  So, to simplify, two Blue Jackets victories and a regulation Detroit loss clinch a playoff spot.

Predictably, things get goofier as you move away from a two-win scenario for Columbus.  With three points —  a regulation win and overtime loss, Detroit needs either a win or two OT losses to claim the 8 slot, and Minnesota needs only a single OT loss to keep Columbus out of the playoff mix.  Dallas remains eliminated.  Splitting the remaining contests eliminates Dallas, ensures that Minnesota stays ahead of the Blue Jackets, and requires Detroit to simply not lose its final two in regulation.  Anything less than a split sends Columbus packing for the off-season.

Blame Los Angeles (Sung to the tune of “Blame Canada”)

The complexity of the Blue Jackets’ situation down the stretch can be attributed in large part to the very un-regal treatment the Los Angeles Kings have provided.  On the one hand, 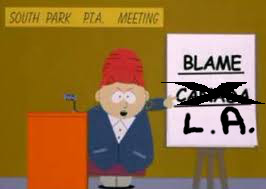 the Kings swept the season series from the Blue Jackets, with the last two being taut 2-1 decisions.  That’s bad enough, but then L.A. decided to take an early vacation on Tuesday and Wednesday nights, losing to Minnesota and Detroit, playing poorly in each contest, and notching only single goals each evening.  Two wins in that stretch do wonders for the Columbus playoff drive, and even a single win there would have swung the odds significantly.  But such was not to be . . .    It’s little wonder that some of the more aggressive members of Blue Jackets Nation expressed some measure of satisfaction over Jeff Carter’s mid-game negligence last night in misplacing two of his front teeth.  Hockey is a brutal game on the ice — and sometimes more brutal off the ice.  What’s a playoff race without a little bitterness, eh?

When all is said and done, and whether or not the present circumstance is to your complete liking, this is what hockey is all about.  Two games left for a shot at the brass ring, and while the Blue Jackets do not control their destiny, they have done themselves and the city proud with their record and the way they have played since late February.  If this were an 82-game season, there is little doubt that the club would be in the Stanley Cup Tournament, and a threat to go deep.  If they play  the last two like they have the previous 26, that’s all anyone can ask.  The bars and Buffalo Wild Wings locations throughout the Columbus area are going to be packed tonight, as the final push takes a critical step in Dallas.

As for Scott Howson, is this really his revenge?  Of course not.  He had nothing of the sort in mind when he proposed the rule 30 months ago. Still, given that the Blue Jackets have a 4-0-1 record against the Red Wings this season, Columbus has to be longing for that old “head-to-head” tiebreaker. You have to wonder if Howson isn’t sitting at his desk in Edmonton, smirking just a bit , don’t  you?