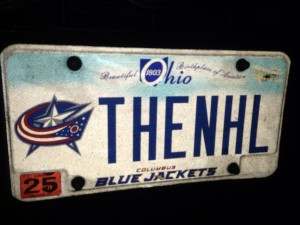 As this installment is written, the Blue Jackets’ training camp is thirty minutes old, with just 25 guys vying for 23 slots – a process that must be culminated in just six days.

Though scheduling conflicts precluded my attendance, early reports  that James Wisniewski led the club onto the ice, and that an SRO crowd  greeted the squad at the Ice Haus.

For those who doubt the viability of Columbus as a hockey market — this response  is common among the fan base.

In the meantime, the Blue Jackets flag flies in front of the house, the full schedule has been loaded in the calendar, and the sweaters are in play.

Of course, today’s festivities are the by-product of yesterday’s ratification of the new CBA by the NHLPA.  (89% voted — all but 12 approved.  NHL GMs to that Dirty Dozen:  “Welcome to the ECHL!”)  That was not enough, however, as the opening of camp and release of the schedules also depended upon the execution of the Memorandum of Understanding by the league and the union.  While the whole process was expected to be completed shortly after the official end of player voting at 8:00 AM ET  yesterday, the process lasted well into the night.  #MOU was trending on Twitter, and media outlets traditional and virtual were wringing hands over space reserved for publishing schedules, training camp details, etc.  In the end, all was handled with few surprises.  Let’s look at what this all means for the Blue Jackets.

With only six days to prepare for a compressed season, there is precious little time for auditions, experimentation and evaluation.  Assuming the club elects to carry the full complement of 23 players, only two “extra” players are in camp.  This is as it should be,  as the number of new faces on the squad dictates that the majority of the time be devoted to finding line combinations and developing chemistry .  One of the major criticisms of GM Scott Howson and former coach Scott Arniel last season involved the huge number of players invited to camp, and the length of time it took to get to the final roster.

The  roster is set in goal — Bobrovsky & Mason, with Bobrovsky the presumptive starter.  By all accounts, Mason has come into camp at a good weight and in shape, but the true issues of mental toughness, focus and fundamentals remain open questions.   After a very successful stint in the KHL, look for Bobrovsky to be the starter.

Defense is largely set, with Johnson, Wisniewski, Tyutin and Nikitin almost assuredly representing the top four.  The third pair will feature Adrian Aucoin and John Moore, with the seventh slot wide open.   The camp contenders for this position are David Savard and Tim Erixon, who has looked impressive in the AHL season to date.  Savard has more NHL experience, but Erixon appears to have more upside.  This will be an interesting decision, and could be driven by other factors, which will be addressed below.

The forward lines are where the real battles and movement will take place.  Atkinson and Johansen are fully battle ready, having honed their skill in the AHL this season.  Newcomers Dubinsky, Foligno and  Anisimov will join Umberger, Brassard, Prospal and Letestu to provide the bulk of scoring.  Derek Dorsett, who made huge strides last season, will be eyed closely, to see if his skills warrant more scoring responsibility or checking line duty.   MacKenzie, Boll and Gillies will be defending regular roster spots against Matt Calvert and Boone Jenner, who is getting a close look at camp.  Observers are impressed with his size and game, so any decision to return him to juniors will not come lightly.

While the forward ranks lack the star power of Rick Nash, they are deeper than ever in players who can legitimately compete for top six slots.  Don’t be surprised if the club debuts with three rolling lines of relatively equal ice time, and a fourth checking line.  In this abbreviated season, Todd Richards faces a dilemma:  how much time does he give for a line to form cohesive ties?  On the one hand, if he shifts personnel too quickly, it will be difficut for the club to effectively integrate the wealth of new personnel.  On the other hand, if lines are not producing, a 48 game season provides woefully little time to atone for scoring droughts.  Of course, Richards has had half a season to think about such things, so this will not be a spur of the moment decision.  It is a scenario that is being mirrored around the NHL — to one extent or another — and each team’s fortunes will be dictated in no small part by how they respond to those challenges.

The Schedule From Hell

For many, yesterday’s highlight was the release of the official 48-game schedule, and Blue Jackets fans and observers responded with predictable shock and awe.   Between opening on the road, and closing at home against Nashville, there are two six-game road trips, including six of the season’s final seven games, and eleven back-to-back contests.  This has conspiracy theorist lamenting that the NHL is biased against Columbus, but such is not the case.  This is truly a case of shared misery, as all clubs will be facing an onerous schedule.  Certainly, the scuttling of realignment stings, as the Blue Jackets face the typical burden that confronts teams situated at the borders of the Western Conference.

There are a few positives in the schedule, for those who look closely.   Columbus has nine of its first 13 games in the friendly confines of Nationwide Arena.  As a club that will be looking to establish cohesiveness early, that home cooking can make the difference.  The Blue Jackets will be looking to leverage that early home advantage, and then split the next 28 games evenly, before embarking on that late trip to Minnesota, Colorado and the West Coast.  (Minnesota, by the way, has the worst travel burden of any NHL team this year, surprising Winnipeg fans).  The club will be looking to have some wiggle room by that point, and will certainly have the advantage of playing together all season going into that sojourn.  The Blue Jackets also travel to western Canada only once — hosting two of the three match ups against Calgary, Edmonton and Vancouver.  Just as well, those trips have historically been difficult ones for the squad.

In a compressed season, a team cannot afford to start off in the hole, and the fact that the lion’s share of early games are at home work to the Blue Jackets’ advantage.  However, there is no free lunch, and the pain will hit Columbus — and every other club — at some point during the 97 day sprint.  The clubs that adapt the best will prevail.

Are Deals In The Works?

Thus far, only a smattering of signings have been announced, and no significant trades.   However, that is almost certain to change quickly, as clubs attempt to navigate the necessities imposed by  an NHL version of the New World Order. TSN pundit Bob MacKenzie keeps close tabs on such things, and let his Twitter followers know his view of the landscape:

Seems like every team is looking for defencemen. I believe DET and EDM are two teams with great motivation to upgrade the blueline.

Defense is an area of some strength and depth in the Columbus organization, so John Davidson may well have a bit of leverage should he be in the market.   If Tim Erixon looks like the real deal — and that seems more likely all the time — a guy like David Savard could be parlayed into additional scoring depth.  Combined with one of the three first round draft picks Columbus holds, a significant acquisition is not out of the question.  League chatter also suggest that a number of clubs are looking for physical, “shut down” style forwards.  Again, the Blue Jackets arguably have more of these than they need, so this is another potential avenue for incremental improvement.

Of course, this is all uncharted territory for the entire league, so nobody knows what the trading activity level will be over the coming days.  It will certainly not be business as usual for anyone — including Columbus. Strap in — it promises to be a wild ride.  In parting, here is Blue Jackets’ video of President of Hockey Operations John Davidson, providing his early thoughts: