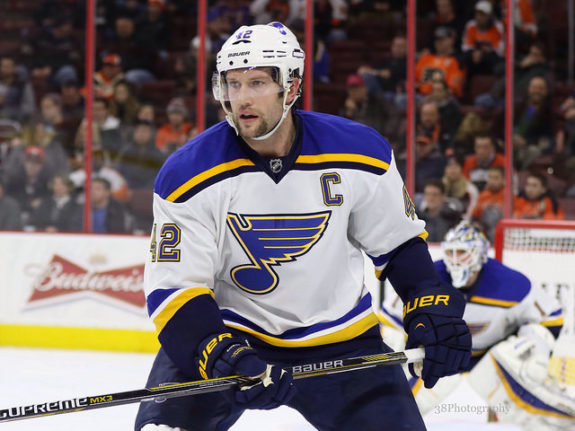 The St. Louis Blues made a statement in losing the opening game of their Round One series in the 2015 Stanley Cup Playoffs to the Minnesota Wild Thursday night. They’ve declared to Blues Nation that they will NOT repeat the mistakes of years past! The Blues will NOT win the first two at home and then get swept out of the first round! Yes, my tongue is firmly in cheek as I make that comment, but all is not lost. St. Louis will rebound Saturday afternoon.

Despite the general feeling of frustration many fans have for the Blues when they play like they did last night (apathetic, slow, lazy) this is the fourth straight year St. Louis has opened the playoffs at home. That’s great right? Consider that the past two years the Blues won both home games to start their pursuit of Lord Stanley’s Cup, only to then drop four straight. Twice. In a row. That’s the stuff of nightmares, which I’ve no doubt Ken Hitchcock (and Brian Elliott) have had many. We wont see that this year.

The last time the Blues lost the opening game of the playoffs was in 2012 vs San Jose. The Blues went on to win the series 4-1 in 5 games.

Back in 2012, Hitch’s first season behind the Blues bench, St. Louis won their division and faced the San Jose Sharks in round one of the playoffs, at home, but lost game one 3-2 in double overtime. The Blues would go on to sweep the next four games and win the series 4-1. I don’t see St. Louis repeating that bit of history either.

Over the last two, disastrous first round exits the Blues scored a total of 24 goals in 12 games. They’re on that pace again this year, netting 2 last night, but with the firepower on this year’s roster I think we’ll see more crooked numbers on the scoreboard. Jaden Schwartz and Alexander Steen showed they can score on Devan Dubnyk. Kevin Shattenkirk had assists on both goals. Vladimir Tarasenko had multiple chances and will continue getting them.

Their own excellent goaltending will buck another Blues trend we’ve seen in recent playoffs: One-goal victories. St. Louis skated to 1-goal decisions ten times in their previous twelve post-season games before last night. Jake Allen was superb versus the Wild and we’ll likely see many close games but that also leads to open nets. I think we’ll see more 2-plus goal margins this year.

To reach this reality the Blues must get more of their shots through to the net. They’ll need to get more traffic in front of Dubnyk and make better entries into the offensive zone. At the same time the St. Louis defense has to stop backing up and giving the Wild easy access to shooting lanes on Allen. The Blues need to stop being cute with the puck, stop trying to make perfect passes through traffic and funnel those pucks to the net. St. Louis did a lot of things wrong last night, but as David Backes said:

I’ll leave you with three specific changes that will mean a Game Two victory:

Robert Bortuzzo in for Carl Gunnarsson. Soft Carl just isn’t going to step up at the blue line and prevent the Wild from speeding into the St. Louis zone. Bortz plays smart, plays heavy, makes good outlet passes and great pinches. I’d play him over at least two if not three of the Blues defensemen based on last night alone. #FreeBortuzzo

The Blues really need to stop dumping the puck in on the power play. I’m not sure many times it’s going to fail before Muller & Co. figure it out, but it simply doesn’t. That’s tied to better zone entry, sure, but when you have an extra attacker… which leads to my final point:

I get it, you’re supposed to have an advantage with more skaters on the ice, but especially in a game where you struggled ALL night with puck possession AND he was your best player from start to finish, don’t pull your goalie off the ice! I don’t care how long that’s been an acceptable tactic in hockey. Stop it.