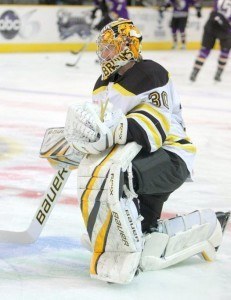 Bozeman, Montana is world renowned for ski resorts, hot springs, rafting and hiking. The city which holds a population of approximately 40,000 is also home to the Montana State University Bobcats Football Team. The Bobcats play in the NCAA Division 1 out of the Big Sky Conference. However, besides the ski resorts and tailgate parties, the city once also served as a junior hockey hot bed in the northern United States.

During the late 90’s and all the way through to the mid 2000’s, Bozeman served as a feeder system for players looking to make the jump from junior hockey to the NCAA. The Bozeman Ice Dogs were a staple in the AWHL and NAHL (Tier II) which meant Division 1 scouts from all over the U.S would flock to the city looking to recruit players for their respective programs. The Ice Dogs would consistently average over 2,000 fans per night at the Valley Ice Garden. Among those fans were many young girls and boys who not only had a chance to watch the player they idolized but the opportunity to interact with them on a personal basis. This interaction led to many children wanting to play and grow up just like the young men they cheered for on a weekly basis.

In 2005-2006 the Bozeman Ice Dogs would finish the regular season with a 48-9-0-0-1 record. They would end up being upset in the playoffs that year as the Texas Tornado would go on to win the Robertson Cup. Despite the loss that didn’t stop the league from recognizing the success of the Ice Dogs. Twelve players from that team would go on to play Division 1 NCAA hockey, while another five would go on to play professional. The coach of Bozeman, John Lafontaine (brother to Pat Lafontaine) would be named Coach of the Year, while the goaltender, Matt Dalton, would be named the Most Valuable Player and go on to sign with the Providence Bruins of the AHL. “Living in Bozeman was one of the best experiences of my life and the fan support was second to none”, Dalton who now plays for Nizhnekamsk Neftekhimik in the KHL, weighs in, “Bozeman will always have a special place in my heart as will all the people I met when I was there”.

The Ice Dogs would also have four of their players named NAHL First All Stars and another player, Chris McKelvie, the Ice Dogs’ resident tough guy, would be awarded the league’s Community Service Award. “I cannot say enough good things about Bozeman, it was a second home for the McKelvie family as I was the last family member to come through the organization”, Chris explains. Mckelvie would go on to play at Bemidji State University and graduate with a Sport Management Degree. “I can’t think of another tier II program that shared the spotlight with an NCAA Division 1 Football team”, describes Chris, “They obviously had a higher attendance but many of the faces at those games would be at ours. Chris Mckelvie now plays for the New Jersey Devils farm team, the Albany Devils in the AHL.

Yes, things looked promising in the hockey world for the small city located seven and a half hours from the Canadian border. The team was winning, the players were developing and the fans were loving every minute of it. However, the players, team and town were about to be thrown a curveball which would question the future of hockey In Bozeman.

A few weeks after the loss to Texas, the Ice Dogs received another devastating blow, when their home rink, the Valley Ice Garden was sold to a beer distributor for cold storage usage. The team and the community had come from within a game of being national champions to having their team and rink taken away from them. Many of the players from that 2006 team would move onto the NCAA and professional ranks but for the young fans that remained in Bozeman, losing their team was almost like a death. The Ice Dogs would be replaced by a tier III team, who played out of a natural ice rink called the Haynes Pavilion. However, the new team and different venue didn’t stack up to what the fans had become accustomed to.

Fast forward almost a decade from Bozeman’s championship game run and the face of hockey has changed in the small Montana city. There are approximately 225 kids, boys and girls, registered in the minor hockey program. The reason why? After the Valley Ice Garden closed its doors, there was a severe lack of available ice in Bozeman. The Haynes Pavilion only provides ice for a select number of months per year and is also used as a Fairgrounds. Nine years ago there were more than 225 young players in the stands to catch an Ice Dogs game but with no ice, parents and their children decided to invest their time in other sports. The ones who did continue to play would have to travel to other cities and register with their minor hockey programs who had readily available ice.

However, all is not lost when it comes to hockey in Bozeman, as the construction of a new arena has finally broken ground. Since the loss of the Valley Ice Garden, a group called the Gallatin Ice Foundation has been working tirelessly with local businesses, the City and donors to bring back year round ice and the hockey culture which was once so prevalent in Bozeman. Their efforts are beginning to pay off as phase one of construction is well underway and the slogan, “Raise the Barn” has begun to take off on social media as more and more people begin to take notice.

The GIF, the City of Bozeman and the generous donors are on their way to bringing hockey back to where it belongs. The “Raise the Barn” campaign has taken on a life of its own and former players are reaching out to not only share their stories but lend a hand. “I can’t imagine what it must have been like to lose the team and the Valley”, says McKelvie, “When they get the rink up, I’ll be the first one in line to come back and coach”. From all accounts, Bozeman is taking the necessary steps to reclaim its spot as a hockey “hub” and as excited as the foundation is to see the building go up, there is an entire other demographic just as excited. The same kids who used to pack the Valley on a Friday night and dream of suiting up for their town, will now have a place to grow those skills and chase those dreams.

For more information on Bozeman and the Gallatin Ice Foundation please visit: http://gallatinicefoundation.org/