Just as soon as the Chicago Blackhawks hoisted the Stanley Cup, it was already time to think about the 2015-16 season. Along with the NHL Draft just completing, the regular season was released for all 30 NHL teams. When the schedules come out, it might as well be Christmas in July for hockey fans. Like any perfect present that is under the tree, there is little to no fear of proverbial coal and the gift always brings guaranteed joy. In other words, it’s obvious how many times teams will be playing against one another. It’s just knowing the order and the dates and times that bring excitement.

With that in mind, let’s break down where the most interesting stretches of games are for the Washington Capitals next season. To find them, I will be charting every opponent’s last year’s standings points, along with pythagenpat goals for percentage and score-adjusted pythagenpat corsi (also known as total shot attempts) for percentage. The latter two categories will be analyzed because we need proof that opponents that performed well in the regular season did so through on-ice talent and adjusted due to strength of schedule and not lucky bounces. Thankfully, as you will notice below, there almost seems to be a direct correlation to winning and scoring more goals than your opponents and out-shooting your opponents. For a better explanation for pythagenpat data, here is the Washington Post’s Neil Greenberg explaining how it is calculated. Each category will contain a game-by-game curve, 5-game rolling average curve, 10-game rolling average curve, 20-game rolling average curve and cumulative average curve. After all the data was collected, here is a graphical look of Washington’s 2015-16 regular season schedule. 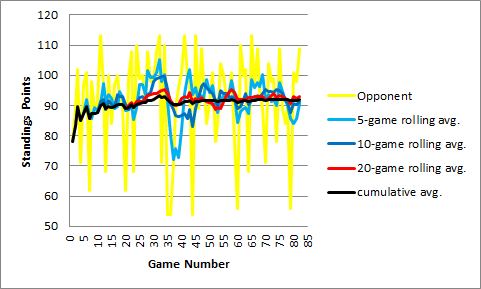 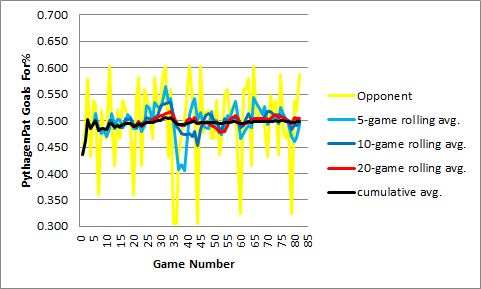 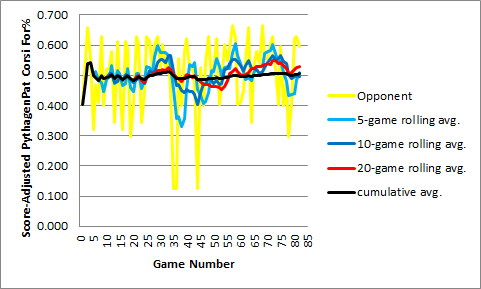 As we look into the three most important runs, it is important to note that every opponent will not be the same as they were last year. Trades, draft picks, signings and current players being a year older have a major affect as to how a team performs from one year to the next. This exercise is just speculation of where the tricky spots are in the schedule.

After a start to the season where the Capitals are only playing 14 of their first 21 games at home and against eight playoff teams from last year, the schedule takes a turn for a more challenging slate. Between Thanksgiving Eve and Boxing Day, Washington will play 11 playoff teams in 14 games and eight of those 14 games will be on the road. Of the 11 games against playoff teams the Capitals will face during this period, three are against Tampa Bay, two are against Montreal and another two are against Winnipeg. Also, Alex Ovechkin and company will play two divisional arch-rivals in Pittsburgh on December 14th and the New York Rangers on December 20th.

As Washington gets accustomed to 2016 and heading towards the All-Star break, they will have a run in which they play seven playoff teams in nine games, including the Rangers twice. Even their games against non-playoff teams could be tricky depending on your opinion. Columbus should be a healthier team than they were last year and Buffalo is a complete mystery depending on how the likes of Evander Kane, Ryan O’Reilly, Sam Reinhart and Jack Eichel play together.

You could argue that this is way too broad of a time period to get a grasp of that portion of the schedule as 15 of the last 29 games of the season are against playoff teams. However, all three graphs indicate that the overall quality of competition will get stronger as that final 29 games moves along. 14 of those games are against Western Conference teams, including both home-and-home games against Los Angeles, Nashville, St. Louis and Minnesota.

Also, after playing 53 games in 122 days (or once every 2.3 days), Washington will play their last 29 games in 58 days (exactly once out of every two days). Usually, NHL teams play the latter portions of their schedules in a more compressed time period, but it highlights that the rest and recovery period is not going to be long at the tail end of the season and why it is so important for teams to avoid playing poorly during this stretch. Even if teams qualify for the playoffs, a bad finish to the season can ruin any momentum for a team to make a deep run towards the Stanley Cup. Last year’s Pittsburgh Penguins and New York Islanders were perfect examples of that situation.