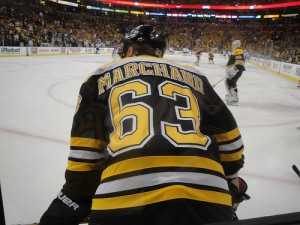 In the course of their 18 games played, the fewest of any team in the NHL, the Boston Bruins have found numerous ways to win. Saturday afternoon’s matinee against the Tampa Bay Lightning was just another example.

Down 2-0 early in the first period after the Lightning potted two quick power play goals, a rarity against Boston, the Bruins looked like they lacked energy. A quick turnaround in the next 40-minutes bounced the Bruins back with three unanswered goals that included a late Brad Marchand goal on the power play to clinch the B’s sixth straight win and the 3-2 victory.

“I thought we still played a good first period,” said Bruins coach Claude Julien in his post-game press conference. “I told the guys that we had 40 minutes left and it was just important for us to stay out of the penalty box and on five-on-five we can get ourselves back in the game.

“As odd as it may have seen, I don’t think there was any panic in our dressing room. There was no panic as far as we were concerned.”

Marchand’s goal came late in the third period on the power play, the second of the game for the Bruins and just as many at home in Boston, following Tyler Seguin first goal of the game on the man-advantage. Marchand’s goal was his 11th of the season and his fourth game-winning goal, good enough for tops in the NHL.

“I just saw the puck coming in the glass and turned up,” said Marchand. “Me and Bergie [Patrice Bergeron] had a two-on-one from our end, and Bergie made a great play and I just tried to find a lane. He gave me a wide open net to shoot at, so it was nice.”

The Bruins surprised some when they announced that Shawn Thornton would be a healthy scratch for Saturday’s game. Jay Pandolfo took the spot of the fourth-line enforcer, in a move that shuffled Boston’s bottom-six forwards, even after Thornton took line rushes during warm-ups. Essentially, the move was made to perserve Thornton and give Pandolfo more ice-time. All roster players must be ready at a moment’s notice, especially with the Bruins playing in their first of 17 games in March.

Julien moved Daniel Paille up to play on the left side of Chris Kelly and Rich Peverley, taking the place of Chris Bourque who lined the new-look fourth-line with Pandolfo and Campbell at center.

The shuffling paid dividends in the second period when Peverley blasted home a shot from the corner with Paille picking up the secondary assist. The goal tied the game at two-apiece and was Peverley’s third-goal of the season.

“We pride ourselves in playing good defensively but you go into games and you want to play the best you can,” said Peverley.

With the Montreal Canadiens coming to Boston on Sunday for the second game in as many nights for the Bruins, it will be crucial for the team to rely on its chemistry as a key to victory.

First place in the Northeast Division is up for grabs on Sunday night.