If the Bruins are going to be successful this season, they’re going to have to come up big when it matters most.

Take Friday’s game against the New York Rangers, for example. Down a goal with five minutes left and going on the power play, the Bruins needed to deliver.

They did. And then, they did again.

The Bruins’ season-high, fifth straight win came against a Rangers team backstopped by the best goaltender in the NHL. It just so happened to be their most impressive one, too. 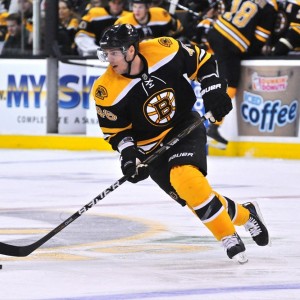 “We’re finding ways to win hockey games now,” said David Krejci, who scored the game winning goal in the last two minutes. “Today was a little bit better, but there’s still some areas we’ve got to improve…it was a good win. We were down a couple times, and we never quit, so it was a big win for our team.”

The Bruins are beginning to handle adversity in a way that allows them to capitalize on opportunities. The improvements on the power play this season give them a much needed element to their game that was missing in previous seasons. It allows them to finish which, wasn’t one of their strong suits in the past.

The Bruins converted twice on three power play chances, scoring the game-tying goal in both sequences. The latter when the Bruins were down by one, with five minutes left.

“For us as a group…I think we just need to talk about maintaining how we’re playing right now,” said Ryan Spooner, who scored on the power play. “I feel that this game that we just played was probably our best in the last five. We just need to be positive with it and just go with it like that.”

The Bruins’ power play has been operating at a 32.4% conversion rate, good enough for best in the league even without converting in the three games before Friday.

“This is a hard-working team,” said Claude Julien. “I think the attitude of this group is they want to do well. Whether they do that every night, I think their intentions are good and when they go out there and compete like they did tonight it’s a lot of fun to coach these guys because there is a mixture of veterans, there is a mixture of leadership and also a mixture of new faces and young players as well.

The talk around the Bruins’ locker room after the game was that this was a character win. In fact, Tuukka Rask mentioned the same could be said about a few of the team’s wins during their streak. The Bruins haven’t been able to keep leads, but they’ve been winning games when it matters most.

Sometimes, all they need is the opportunity.