Pavel Buchnevich found himself out of the lineup as a healthy scratch Thursday night with coach Alain Vigneault citing poor performance as the reasoning. Although benching a young player who is struggling isn’t unusual, he has a different situation. As he is still adapting to the NHL, Buchnevich needs to play to grow his game and reach his full potential.

In the six games he has played in February, he’s averaged just 9:16 time on ice. That includes appearances on the power play on top of his even-strength time on the fourth line. This is obviously a glaring issue for a player with the type of talent that Buchnevich possesses.

The amount Buchnevich has played so far in February is similar to Jimmy Vesey’s play time in January. Before Vesey was moved up to play with Rick Nash, he was commonly getting 16 shifts a game. That equates to about 11 minutes of ice time. Vesey has recently picked up his game, so Alain Vigneault must look at Buchnevich the same way. The more he plays, the better the team will be.

Pavel Buchnevich was one of the most highly touted prospects on the Rangers coming into the year. Who would’ve imagined that he was going to end up on a line with defensive stud Jesper Fast and average-at-best center Oscar Lindberg? This is just another problem the Rangers will need to address if they expect Buchnevich to produce this year. Jesper Fast is known for his elite penalty kill ability, not his offensive production.

Oscar Lindberg fills the fourth line center role as a very mediocre offensive player with some faceoff ability. With the Rangers expecting Buchnevich to be a big part of the roster, this needs to be fixed. On top of fixing the defense, adding an improved fourth line center could be on the Rangers’ deadline list.

Progressing as a rookie in a new league isn’t always easy. Look at Vladimir Tarasenko.

Tarasenko had his struggles in the NHL after coming over from the KHL. In his first year in the league, he scored eight goals and tallied 11 assists over 38 games. These numbers are very good for a 21-year-old, the same age Buchnevich is now. While the comparison isn’t realistic seeing as Tarasenko is a superstar now, Buchnevich has great potential like Tarasenko did as a rookie.

Obviously, it’s extremely important for Buchnevich to get on the ice with good linemates. With Michael Grabner and Jimmy Vesey playing incredibly well recently, it may be a while before he gets more ice time. Would it be effective to try Brandon Pirri in the fourth line center spot? Maybe, but with Vigneault liking what Lindberg brings to the table, the fourth line will likely not produce up to its full potential.

Realistically, the production that Buchnevich can bring to the fourth line could be something that makes the Rangers forward core great. His KHL statistics are extremely promising — as an 18-year old, he had 30 points in 48 games with Severstal Cherepovets. Just one year later, he tallied 29 points in 40 games. The statistics don’t even tell the full story. 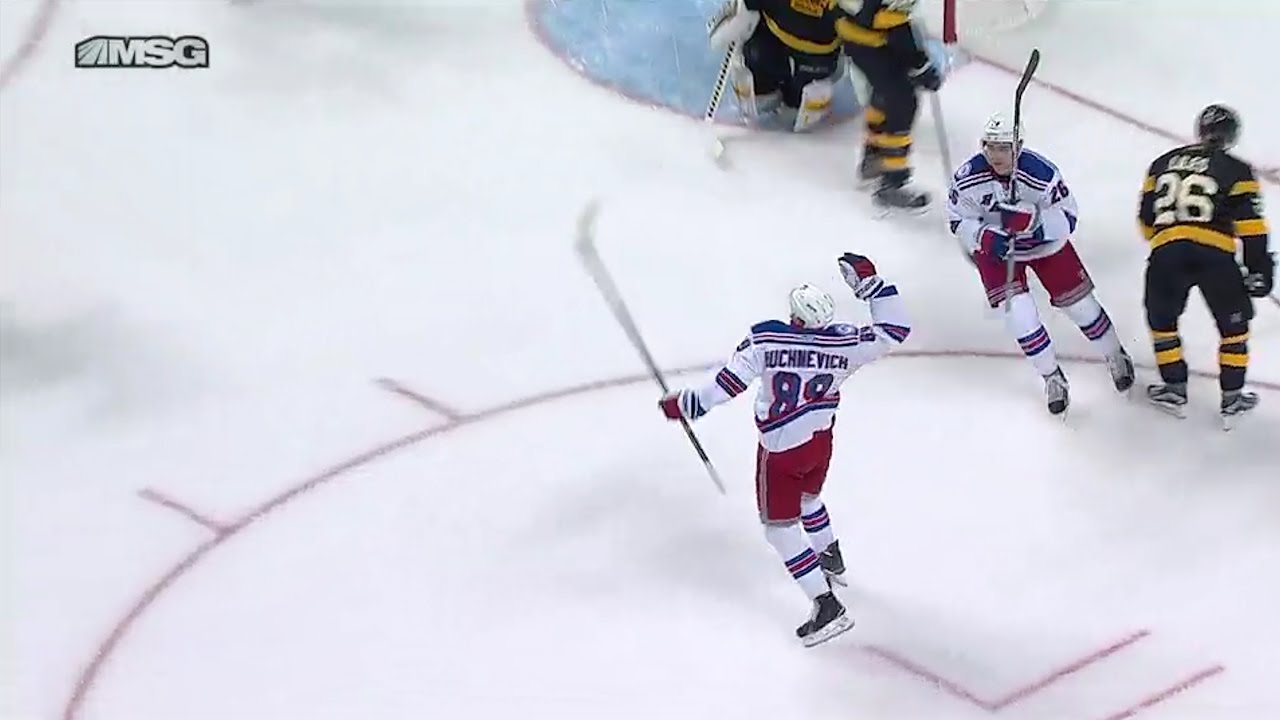 Over his short career, Buchnevich has had serious success playing hockey at a high level. As soon as he made his debut in the lineup, he showed immense talent and a blistering shot. That shot racked up 37 goals in the KHL on top of his 50 assists. Include his off-the-chart offensive instincts and he needs to have a bigger role in the Rangers lineup if they plan to make a run in the playoffs. Without significant minutes, his progression will slow down and he’ll never reach his potential in a New York jersey.