The Buffalo Beauts will now be playing in the Isobel Cup Final for the fourth straight season. That marks every season since the NWHL’s inception. After handily defeating the Boston Pride 4-0 in their home semi-final on Mar. 10, 2019, they will now face either the Minnesota Whitecaps or the Metropolitan Riveters for the Cup.

The location of the Final depends on the winner of Minnesota and Metropolitan semi-final. When the 2018-19 regular season came to a conclusion, the Whitecaps were at the top of the standings, the Beauts were second and the Riveters finished fourth. Should Minnesota win their game, the Final will be played in Minnesota. If Metropolitan comes out on top, then the Buffalo faithful will witness their first ever home Isobel Cup Final.

Understandably, there is a great deal of enthusiasm on the Buffalo side of things right now. No matter which team they face or where it might be, the Beauts are once again in prime position to win what would be their second Isobel Cup.

“It’s kind of out of our hands right now,” Beauts’ goaltender Shannon Szabados said after the game about the potential of playing for the Cup at home, “so we’ll see how the game goes tomorrow. I mean, obviously we would love to, but we’re not too worried where the game is.”

Postponed Wait for Who Their Opponent Will Be

Unfortunately, Szabados and the Beauts will need to wait a bit more than 24-hours to find out who their opponent will be and where they will play them. The semi-final between the Whitecaps and Riveters – which was originally slated for Mar. 10 – has been postponed due to weather-related travel difficulties. The Riveters’ original flight out of the New York City area to Minnesota was cancelled, and further delays were encumbered the next morning.

The NWHL is still determining when the game will ultimately be played.

While Beauts fans are very anxious to find out if they will be witness to the championship game in person, they know that they have arguably the best women’s goaltender in the world on their team. This increases their chances of victory quite dramatically. Not only is the 32-year-old Szabados a three-time Olympian – two gold medals and one silver – but she has been lights-out in her first NWHL season.

The All-Star netminder’s regular season record was 6-3-1. Szabados allowed a mere 15 goals in her 10 games played and posted two shutouts. That amounted to her having a superb 1.49 goals-against average and a .934 save percentage. Such a solid performance now has Szabados as a finalist for both the NWHL’s Best Goaltender and Newcomer of the Year awards.

The performance she gave in Buffalo’s semi-final victory to vault them into the Final was some of her best hockey all season. Szabados turned away all 31 shots she faced from Pride shooters to pitch a shutout in her first ever NWHL playoff game. Most importantly, as Boston desperately tried to forge a comeback in the third period, Szabados turned aside 16 shots in that period alone.

Buffalo Has the Best Forward Line in Hockey

Along with their stellar goaltending, Buffalo’s offense continues to roll with very little to stand in its way. The Beauts top line of Dani Cameranesi, Maddie Elia and Hayley Scamurra is easily the best line in women’s hockey right now, for any league. Elia led the entire NWHL in goals scored with 12 in 16 games. Scamurra’s 20 points in 16 games was tops among all NWHLers too, and she was the only player in the league to record double digits in both goals and assists.

Their line was at its finest in the win over Boston, especially Cameranesi. The trio combined for six points from Buffalo’s four goals, with Cameranesi scoring one herself and assisting on two others. Elia opened the scoring at 10:32 of the second period, and her tally held up to be the game-winner.

“I think there’s a lot of excitement right now,” Cameranesi told the media after the game. “We put together a great game tonight. One of the big things is that we finally cashed in on some special teams, which we’ve kind of been snakebitten on a little bit, so that helped. But we really still have to work, and hopefully achieve our final goal.” 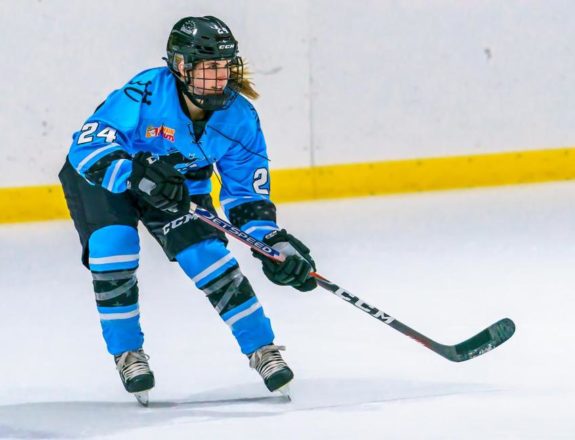 Dani Cameranesi scored a goal and added a pair of assists to help lift the Buffalo Beauts into the Isobel Cup Final (Photo Credit: Matthew Raney).

Cameranesi’s goal was a power play score, as was the second Buffalo goal of the game coming from defender Emily Pfalzer. Cameranesi set that one up too, along with Scamurra. The Beauts finished two for five on the power play.

With both teams having been deadlocked 0-0 after the first period, there was a great deal of tension mounting inside of Buffalo’s HarborCenter. Opportunities were stymied both ways. Boston goaltender Katie Burt did the splits and stole a sure goal away from the Beauts’ Taylor Accursi in the opening frame. A short time later, Buffalo’s rookie blueliner Savannah Harmon did a nice job of breaking up a 2-on-1 rush by the Pride before the play ever got close to Szabados.

Something needed to give, and Elia’s goal shifted the momentum in favor of the Beauts.

“Obviously we knew with the home crowd it would be awesome to get the first goal,” Elia said after opening the scoring for her team. “Get the adrenaline. After I put that in I thought it was a good boost for our team, and kind of got us fired up and going again.”

How the Beauts Stack up for the Final

The Beauts obviously have the goaltending and the offense to bring the Cup back home to Buffalo.

The numbers do not lie either. Of the three remaining teams vying for the Cup, the Beauts scored the most goals among them. Buffalo generated 57 goals during the regular season, as opposed to the Whitecaps’ 53 and the Riveters’ 32.

As further evidence of their goaltending and defensive prowess, the Beauts allowed the least amount of goals in the entire league. In their 16 regular season contests, they were only scored upon 25 times. No other team in the league allowed less than 34 goals. Meanwhile, the Riveters allowed the most of the five teams – a total of 65. 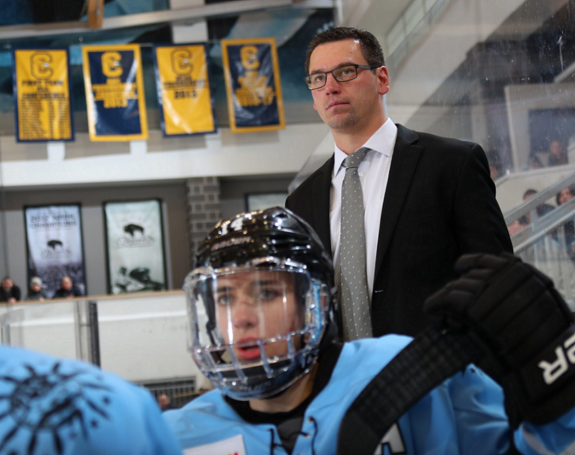 Buffalo Beauts head coach Cody McCormick has a very enviable roster that is firing on all cylinders at the moment (Photo provided courtesy of the Buffalo Beauts).

In terms of head-to-head play during the regular season, the Beauts have the advantage over the Riveters. Buffalo earned a point in all four of their games against Metro and finished the season series with three wins and an overtime loss.

A bit of a different story against the Whitecaps though. Minnesota won three of the four meetings with Buffalo during the regular season, though each game was decided by just one goal. Buffalo’s lone victory over Minnesota was a 4-0 win on Dec. 30, 2018.

Simple enough though, Beauts head coach Cody McCormick needs his team to play in the Final the same way that they did in the semis against Boston. If they can do that, then the Isobel Cup will be theirs for the taking.

“I thought everybody contributed,” McCormick said about his team’s play in defeating the Pride. “Everybody elevated their play, and that’s what you need in playoffs. Special teams came through for us huge, and I can’t say enough of how Shannon performed for us in net.”