With the reformatting of the divisional format in the NHL, you might be left with questions about the team’s in Buffalo’s division, the Atlantic Division. Who will the Sabres be seeing a lot of? Where will they shake out?

Thankfully for you, that’s where I come in. Welcome to your guide to the division.

What did they do last year?

It wasn’t the best of years for the Lightning. 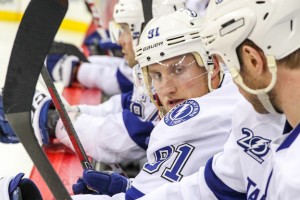 Heading into the season, the team felt they finally had their guy between the pipes in Anders Lindback and had shored up the defense enough to be dangers. Marty St.Louis and Steven Stamkos were back and their normal selves.

The team started hot in January, going 5-1-0 before it all fell apart the final three months of the season. Lindback was not as advertised, with a save percentage barely hovering over .900 and a near-3.00 GAA.

Defensively, outside of Matt Carle and Viktor Hedman, there wasn’t much else in the way of consistency. The team lost alternate captain and veteran Mattias Ohlund to knee issues and may not see him again if he continues to experience setbacks.

Offensively, it was once again the Marty and Stammer show. The ageless St.Louis, thanks to an injury to Sidney Crosby, led the league in scoring with 60 points in 48 games. Stamkos was right behind him with 29 goals and 57 points, establishing themselves as arguably the best 1-2 scoring punch in the game right now.

GM Steve Yzerman made a move at the trade deadline to bolster his goaltending issues, acquiring Ben Bishop from the Senators for young upstart Cory Conacher. It remains to be seen whether or not Bishop can be “the man”.

It seems as though it’s the same story, different year for the Lightning. Up front, they are as talented as they come. The Stamkos/St.Louis duo will continue to lead the way for as long as Marty’s little legs can take him.

Joining them up front is third overall pick Jonathan Drouin out of Halifax of the QMJHL. Drouin was considered one of the elite talents heading into the draft and should have a sizable impact in the offensively talented Lightning lineup. If he sees time on the power play with Stamkos and St.Louis, things could get messy for the opposition. 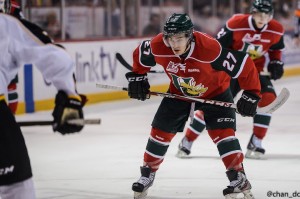 Jonathan Drouin lines up for a faceoff [photo: David Chan]

Ryan Malone, Valtteri Filppula (replacing the departed Vincent Lecavalier), and Teddy Purcell fill out the rest of a very good top six that should keep the Bolts dangerous most of the time.

The defense remains largely the same with the X-factor being the return of Ohlund. If he can come back, his veteran presence alone could be a big help to a defense that struggled last year despite the ever-improving game of Hedman. Finding some semblance of consistency would go a long way towards improving the situation.

In terms of goaltending, there’s a giant question mark hovering over the position but at least Yzerman has options. Lindback was a disappointment but the team obviously sees enough in him that they were willing to give him a shot as the undisputed #1. With Bishop in the fold now, perhaps the Bolts can get lucky enough to have a good platoon on their hands. It’s better than having no discernible goaltender to speak of, after all.

Where do the Sabres stand?

The Lightning’s M.O. remains unchanged: tons of talent in the forward corps, questionable defense and goaltending.

The Bolts are smaller and quicker up front (though, they do have some size with Malone and Purcell) but they get bigger the further back you go. Luckily for the Sabres, there aren’t many mashers on the Lightning back line, so even if they happen to get caught in the offensive zone, they aren’t necessarily going to pay the price.

The name of the game for the Sabres will be to use their speed, put shots on net, and get the Tampa defense thinking quickly and moving all over the place. Testing Bishop will be the key on most nights as he’s still relatively unproven despite a solid stint during his time in Ottawa.

Buffalo played them tight last year but you can only contain Stamkos and Co. for so long.

Ryan is a writer for The Hockey Writers covering the Buffalo Sabres. He also runs Mile High Sticking and The Farm Club.